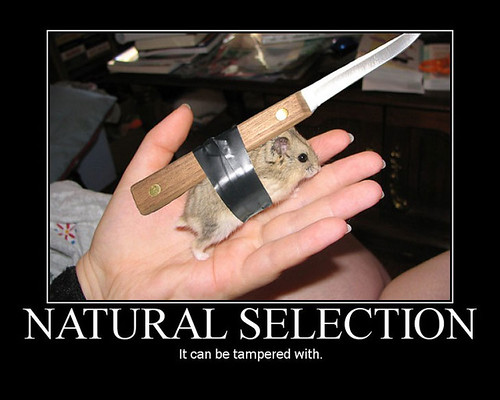 The second most incorrect thing people say about evolution is that it is the survival of the fittest.  (The most incorrect award has to go to the claim it doesn’t exist).  The problem with this framing is that it sets up a picture of evolution-as-craftsman, carefully scrutinizing genetic variations and selecting and nurturing the most promising variant.

But evolution isn’t selecting for, it’s selecting against.  Instead of survival of the fittest, it’s the persistence of the just barely workable.  If an organ or a social structure is stable, it has the potential to last.  Put simple, evolution favors local maxima.

If you want to get to the higher peak, you need something more directed than evolution or some pretty brutal selection pressures.  So even if we believed that evolution was favoring moral improvement, it would be easy for progress to come to a halt far short of its potential.

But it’s worse than that.  The z-axis in the graph above isn’t ‘goodness of group dynamics’ or ‘considerate feelings for others.’  It’s simply successful reproduction.  Evolutionary psychologists can come up with elaborate explanations of how altruism could be part of a local maxima (or a Nash equilibrium, if we’re talking game theory), but that’s a long way from claiming it’s a necessary property of all local maxes or just the global max.

It’s easy to find counterexamples of stable evolutionary strategies that strike us as morally abhorrent.  This one comes from Science as excerpted by TYWKIWDBI, and concerns gelada baboons:

If a newcomer ousts the chief monkey, it’s bad news for the group’s females. A wave of death sweeps through the unit, as the new male kills all the youngsters whom his predecessor fathered… But that’s not all. Eila Roberts from the University of Michigan has found that the new male’s arrival triggers a wave of spontaneous abortions. Within weeks, the vast majority of the local females terminate their pregnancies. It’s the first time that this strategy has been observed in the wild…

It’s obvious why the incoming males kill any existing infants. Female geladas don’t become fertile until they stop raising their existing children. Assuming no abortions, they go for three years between pregnancies. That’s longer than the typical reign of a dominant male. So, a newcomer, having finally won the right to mate, has few opportunities to actually do so. To make things worse, his females are busy raising someone else’s children. His solution: kill the babies. The quicker he does this, the sooner the females become fertile again, and the sooner he can father his own children.

But why would a pregnant female abort her own foetus? Roberts thinks that it’s an adaptive tactic in the face of a new male’s murderous tendencies. Since the male would probably kill the newborn baby anyway, it’s less costly for the female to abort than to waste time and energy on bringing a doomed infant to term. Her future offspring, conceived more quickly and fathered by the incumbent king of the hill, will stand a better chance of survival.

It’s stable states like these that mean I have little patience for evolutionary psychology or some spins on natural law as a foundation for ethics and obligation.  Evolution is a wholly amoral process, so why would I expect that it would preserve and amplify whatever signal points us to the Good and the True?

Some atheists seem to think evolutionary psychology will excuse us from thinking about metaphysics, and some natural law proponents think that by studying our own physical bodies, we can intuit their form and proper function.  I’d love to hear commenters on either side explain how they can distill moral instruction from a blind process that can’t take ethics into account.

The one counterargument I want to dispatch in this post is the idea that evolution promotes moral behavior because it has given us an intelligence to recognize moral behavior and to modify ourselves appropriately.  This is just saying that evolution has brought us to the point where we can actively and deliberately subvert evolution.  This is true, and I’m glad to welcome you to the transhumanist club, but it does not suggest evolution is directed towards moral behavior or reflection.

February 28, 2012
Alain de Botton Gets it Backwards
Next Post