Evolution Isn’t On Our Side

Looks like there are still some questions about why I’m drawing a distinction between selecting for and selecting against in my post on how evolution doesn’t optimize for ethics.  One commenter wrote:

I see what you are saying, but isn’t it easier to think in terms of “selecting for” when considering how sexual selection gives rise to traits like large antlers on deer? Certainly you can say that “antlers that are not large enough are being selected against” but it seems more natural to say that larger and larger antlers are being “selected for” and to think of the selective pressure as driving change in a very specific direction.

It seems like a pointless distinction here because the commenter has switched to using my phrase but not my framework.  Switching from saying “Evolution selects for X” to “Evolution selects against not!X” isn’t making enough of a change. Talking about ‘selecting for‘ gives the false impression that evolution is a process aiming at a particular design or functionality.   Evolution is not rooting for longer antlers on dear any more than a microphone pointed at a speaker is rooting for an annoying feedback squeal. It may be the necessary consequence of initial conditions, but it’s not a goal of the system.

Saying “antlers that are not large enough are being selected against” is actually still kind of buying into the selecting for problem. Large enough for what? There isn’t a platonic deer with ideal antler length that evolution is trying to create. Long, short, doesn’t matter, as long as it gets you to reproduction. 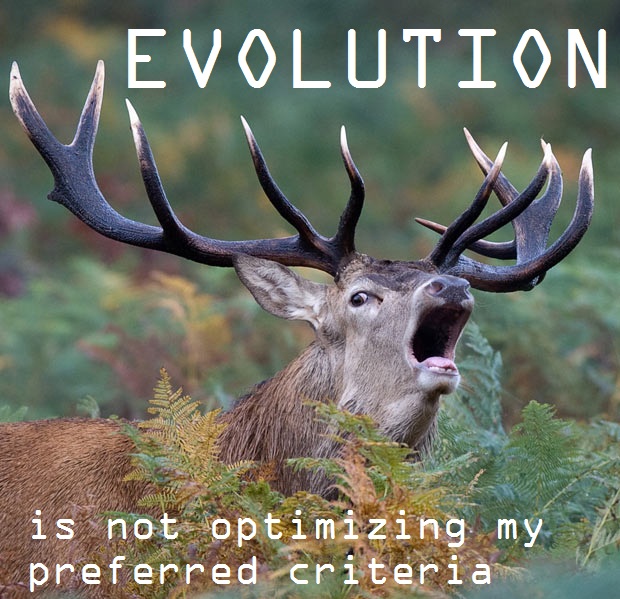 In fact, some species end up with several mutually exclusive reproductive strategies.  One example are fish species where the males fit into the Streakers and Sneakers model — big attention-getting males that fight each other for mates (streakers) and small inconspicuous males that mate with fish in a Streaker’s harem without him noticing (sneakers).  Males are either Streakers or Sneakers, but there’s no sustainable role in the middle of these extremes.

Orangutans also follow this model. The larger males court females and defend them against rivals; the sneaker males assault the female orangutans if they are alone and beat them savagely in order to force coitus.  [Orangutangs are another species that has a stable reproductive strategy that outrages our ethics but is irrelevant to evolution’s processes].

This is more than a semantic debate.  Recognizing that evolution doesn’t have a goal changes the way we think about our own physical existence and our relationship to our bodies.  Evolution is not perfecting a design like a craftsperson, it is just the process by which the unworkable ceases to persist. There isn’t a future ideal form that evolution is driving us toward, and, if we could scry into the future, we might be find the stable outcomes favored by evolution are intolerable to our moral senses.

There’s no natural optimizing force that’s operating based on the criteria that matter. We have to take responsibility for shaping and creating our future selves and future generations.

Abortion Kills a Baby. McCorvey's Confession and User...
FX is airing a documentary called AKA Roe. In this documentary, Norma...
view all Catholic blogs
What Are Your Thoughts?leave a comment
Copyright 2008-2020, Patheos. All rights reserved.