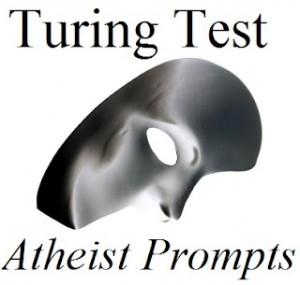 This is the ninth entry in the Atheism round of the 2012 Ideological Turing Test for Religion. In this round, the honest answers of atheists are mixed in with Christians’ best efforts to talk like atheists. It’s your job to see if you can spot the difference. The voting link appears at the end of the entry, and you can look at all entries in this round here.

I’m not sure I have too much of a philosophical system, or if I do, it’s still a work in progress. I’m also not sure if I’ve deferred to theory over intuition on any moral questions. I defer a lot more to people rather than to systems, I think—see below!

I’ve spent a lot of time in twelve-step circles. And while I don’t practice the twelve steps (so the Higher Power question is moot for me) one of the best lessons I’ve received from that way of thinking is the idea that you should look for people in recovery who “have what you want.” It took me a long time to learn how to do this. In the past, if I saw someone who seemed to be leading a great life without drugs or alcohol, I’d assume that this person was just naturally better than me in some way and that their path was obviously not open to me. Over time I began to “take suggestions,” to just do what other people in recovery suggested to me, and so much of that stuff actually worked that I began to look around for people who had what I wanted and ask them about their daily habits, beliefs, etc.

This is a process, and it isn’t a hard-and-fast rule—there are people whose programs of recovery I admire a lot whose moral beliefs I wouldn’t necessarily defer to on all questions. I mean, I wouldn’t vote the way they told me to, for example! (Although part of the reason I trust them is that they wouldn’t ask me to.) But I think I’ve learned to recognize, at least to some extent, when people know more about life than I do, and when we differ on something, I’ve gotten a lot more patient and a lot more likely to accept their beliefs at least for the moment.

You could argue that since I’m the one picking who to talk to and who to defer to, and since I reserve the right to disagree with everyone, I’m still basically trusting my own intuitions and opinions most. But from the inside it doesn’t feel that way. When I talk with someone I respect in this way and they present a claim or an argument I disagree with, it often feels like I’m being surprised and guided in ways I simply couldn’t do for myself. It feels more like the philosophy which begins in wonder (as vs. the philosophy which begins in doubt, yes, I was a philosophy major). And on a personal level the ongoing practice of humility I need in order to live well feels totally different from a purely self-guided, self-generated belief system. It feels like the kind of trust Leah’s talking about in this question.

I don’t know how this is different from trusting somebody’s opinion about physics. Maybe just that I care a lot more about it! I would rather ride in an airplane designed by somebody who doesn’t really understand physics than entrust any part of my recovery to someone whose moral beliefs and guidance would lead me astray. Because more than my own life is on the line.

I don’t know if I feel “awe” most often through art. I think the most obvious times I feel awe are when I’m with little kids, like my sister’s kids. They’re so bizarre, so clearly Other: They’re like humans-only-more-so. That encounter with the otherness of another person’s mind and consciousness is what gives me the greatest sense of awe. Responding to otherness with love rather than with rejection might be one of the biggest elements of what passes for my moral system.

As far as works of art which capture the way I see life… well, in my darker moments, maybe The Birds. There’s a lot of light in that movie at the beginning, but it’s really about this totally meaningless, awful attack which has no purpose, no cause, no cure. I do think humans are really prone to turning from cooing lovebirds into attacking crows, basically for no reason. Something inside us jumps the wrong way.

In my lighter moments, there’s an animated movie called Tokyo Godfathers which is about really ramshackle people going on a kind of quest to find a home for an abandoned baby, and I think that gives a sense of how we can save each other.

May 28, 2012 [Turing 2012] Atheist Answer #10
Recent Comments
104 Comments | Leave a Comment
"Jesus wasn’t resurrected as a great miracle simply in order to convince people to believe ..."
John The Two-Lazarus Problem
"The cartoon is amusing, but flawed. One of the four virtues of Stoicism is Justice; ..."
Vulpes Inculta 7QT: Stoicism Man, Semi-Imaginary Money, and ..."
"Do You Know what isn't Fair? Calling Atheism a Religion. Or saying Dawkins is a ..."
skwills Who Gets to Give the Courtier’s ..."
"Oh! And you can get there via Naval Gazing.(probably not by Navel Gazing...)"
TheSparksFlyUpward Too Sucky To Be True
Browse Our Archives
get the latest from
Catholic
Sign up for our newsletter
POPULAR AT PATHEOS Catholic
1

Faith, Integrity, and Eucharistic Coherence
My high school senior just wrapped up her volleyball career on a...
view all Catholic blogs
What Are Your Thoughts?leave a comment
Copyright 2008-2021, Patheos. All rights reserved.