The Judges Lose The Ritual Round of the ITT

All right, take all the results with a grain of salt (non-Christian responses were low for this question — just 21 replies), but I’m hard pressed to crown a winner on this question instead of just saying that the judges lost.  Technically this was the highest ranked fake-atheist response to “What role does ritual have in your life? What role would you like it to have?”

I’ve always loved routines, but I think that’s not quite what “ritual” means. I take “ritual” to refer to events that are especially significant for a given community, and create an altered sense of the passage of time. For example, at a baseball game, you become a member of the crowd, and together experience time as governed not by physics, but by the division into nine innings with various activities in the breaks between.

The idea of such rituals has often been important to me, but the actual practice of them, not so much. I loved attending baseball games as a kid, but now, though I enjoy the game itself, the rest feels like an exercise in nostalgia. I’m too self-conscious, perhaps, to actually enjoy cheering when everyone else cheers. I’ve also always liked the idea of rites of passage, and of parties as symbolic gatherings of the entire community; but I’ve never been to a graduation ceremony that wasn’t terribly boring, and I’m way too self-conscious to actually enjoy parties (unless I get so drunk I begin asking people to pose me math problems).

This may be because (though I do have friends!) I don’t feel enough like a member of any community to actually appreciate any community’s rituals. Or it may be that the kind of community I’m a member of is the kind that, for whatever reason, can’t have rituals. I’m not sure.

Sixty-seven percent of non-Christians thought that answer was the real deal, making it the highest ranked answer overall.  The odd thing was that the three Christian answers took the three top spots.  So, the judges did a really good job distinguishing between the two groups, but not quite accurately.  (Real non-Christians are solid shaded, shamming Christians are faded) 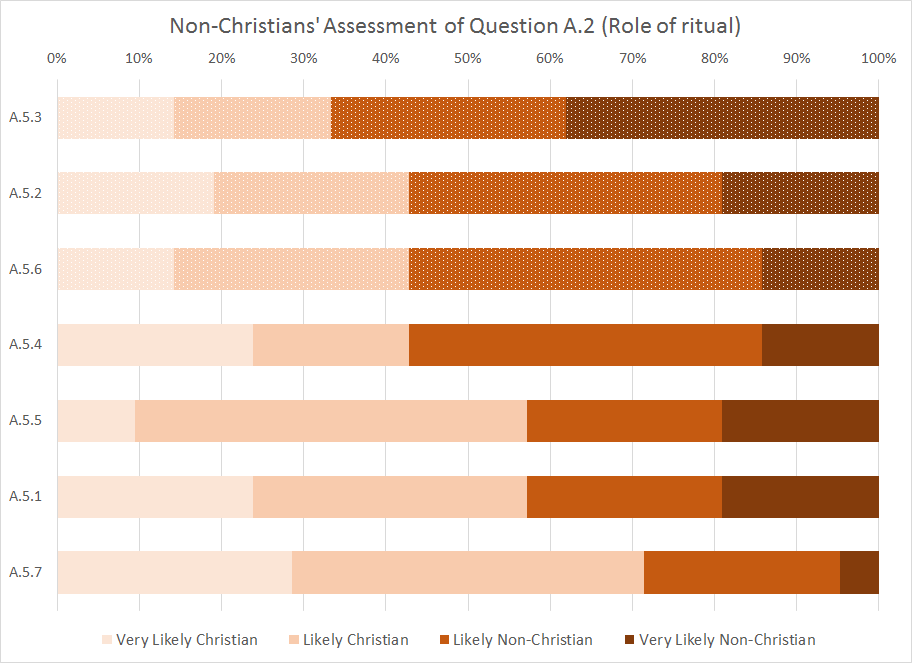 Our Christian winner is the same person as the winner in the last round:

A born-n-raised Roman Catholic who attended a Catholic liberal arts university, I’m now getting a PhD (from a secular school) in literature.

The Christian judges, like the non-Christian ones, ranked all the fakers ahead of the real responses: 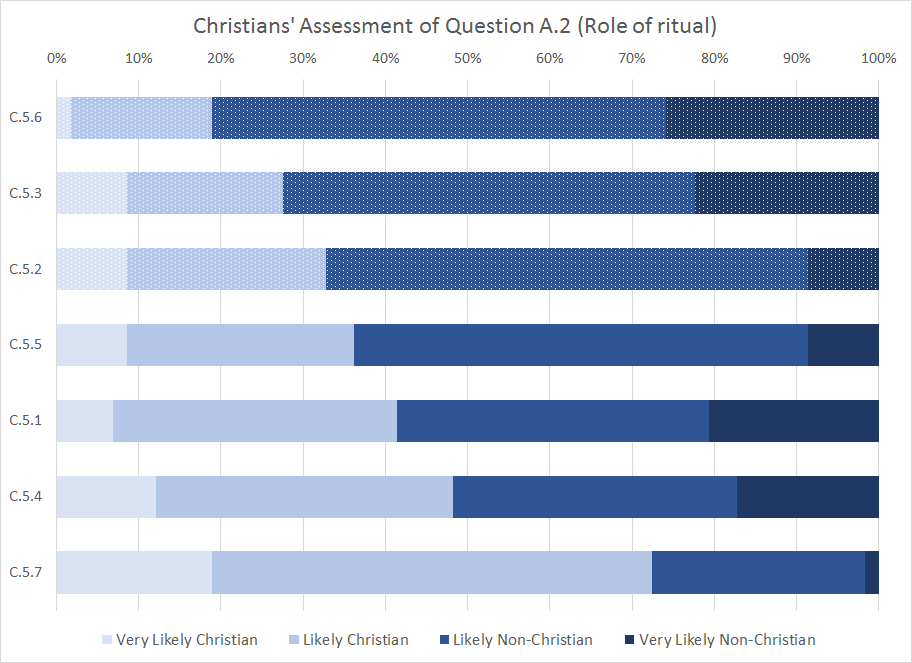 And both sets of judges ranked this (real!) answer as the least plausible:

Ritual is important for things that should stay the same. I always wake up at 6:30, and take a shower, brush my teeth, etc. This is a ritual and I never will change it because I never will need to, unless something drastic happens. I like it to remain this way unless there is reasonable need for a change.

This one came from an atheist teenager, and the age of the participant may have had something to do with how it was written and judged.

I’m most curious about your thoughts on why the Christian answers came out ahead of every one of the non-Christian ones on this round.