The Epistemological Weight of Warm Fuzzies

I was reading an On the Square post from a Mormon to Catholic convert and was struck by the way he described his enounter with grace:

Early in the evening of May 28, 2010, I am attending Mass in the majestic Basilica di Sant’Apollinare next to the Pontificia Università della Santa Croce in Rome. From Utah I have come as a scholar to deliver a paper at an international conference on the work of the great Catholic philosopher Dietrich von Hildebrand, and I have come as a tourist to see the Eternal City for the first time. Mass is being celebrated in the basilica for those attending the conference.

I am not Catholic—in fact, I was raised a Mormon, though I have had serious doubts about the Latter-day Saint faith for decades. Yet my journey of the heart—which ultimately ended in the Catholic Church—came long after I had intellectually departed—so I cannot receive Holy Communion. But when Archbishop Raymond Burke places his hand on my head in a blessing, the extraordinary presence of Jesus Christ moves my soul to tears. I now know, in my head and in my heart, that I have come to Rome as a pilgrim. I have finally heard his voice, and I will not turn away.

This part of his conversion journey sounded deeply Mormon-tinged. I’ve heard the pitch for Mormonism boiled down to “Read the Book of Mormon, and then ask God if it’s true. You’ll find the answer!” and it sounds like this essayist asked God (consciously or not) about Catholicism and got an answer that satisfied him.

I still don’t find this kind of evidence very convincing. A lot of different religions have had converts who were ‘convicted’ a similar way, so either it’s easy to be mistaken about this sort of thing (uh-oh) or God is extremely ecumenical.  I’ve got reasons to be skeptical, but I also know I’m a little badly calibrated on how to use emotions as evidence, so I wanted to thrash this out with someone else.

I pinged Michael, the Mormon friend of the blog who handled questions about Romney’s Mormon priesthood to get his thoughts. So I’ll be running a guest post by him and then a couple of rambly (on my part, not his!) follow up questions about conversion and evangelization. 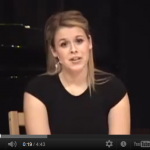 September 6, 2012
If you can't take the heat... once more with feeling
Next Post

September 7, 2012 A Mormon Perspective on Interrogating Emotions
Recent Comments
149 Comments | Leave a Comment
Browse Our Archives
get the latest from
Catholic
Sign up for our newsletter
POPULAR AT PATHEOS Catholic
1