I was about title this “7 Geeky Takes” and then I thought, “Why is this day different from all other days?”

I have always loved Bill Nye the Science Guy.  I loved him as a kid and I loved him even more when he guested on Numb3rs and turned out to be a terrible actor (which means all his science enthusiasm is totally unfeigned).  So I’m delighted to tell you guys that there’s a great interview with him in Fast Company.  All the bits are my favorite bits, including this anecdote:

And then in January of 1987, we needed six minutes on the comedy show [because a guest cancelled].

I did this bit, “The household uses of liquid nitrogen.” Because we all have liquid nitrogen around. So this was just reminder of some tips. I know normally you use it by fitting up your close-fitting machine parts, by getting one part really cold, but you can also use it for straightening out limp celery. You can slice onions with it, when you hit them with a knife, it’s really satisfying. It sounds like breaking glass. It’s a really striking sound. Striking, ah! Hilarious pun. Now the payoff, what I spent a lot of time doing, is you cook or roast marshmallows in liquid nitrogen and then you chew them and steam comes out of your nose. It’s really good.

And yeah, you can burn your tongue, but we’re artists.

I feel obliged to follow that article with this video from College Humor which imagines Breaking Bad with Bill Nye as the protagonist:

Want more people to carry the exuberant geekiness torch?  Vi Hart has a youtube channel of engaging math chats, and below is her introduction to hexaflexagons.

And in more good news, Eliezer Yudkowsky has started a new sequence on Less Wrong.  It’s titled Highly Advanced Epistemology 101 for Beginners and the two installments are up: The Useful Idea of Truth and Skill: The Map is not the Territory. Here’s an excerpt from the latter:

Skill 1: The conceivability of being wrong.

In the story, Gilbert Gosseyn is most liable to be reminded of this proverb when some belief is uncertain; “Your belief in that does not make it so.” It might sound basic, but this is where some of the earliest rationalist training starts – making the jump from living in a world where the sky just is blue, the grass just is green, and people from the Other Political Party just are possessed by demonic spirits of pure evil, to a world where it’s possible that reality is going to be different from these beliefs and come back and surprise you. You might assign low probability to that in the grass-is-green case, but in a world where there’s a territory separate from the map it is at least conceivable that reality turns out to disagree with you. There are people who could stand to rehearse this, maybe by visualizing themselves with a thought bubble, first in a world like X, then in a world like not-X, in cases where they are tempted to entirely neglect the possibility that they might be wrong. “He hates me!” and other beliefs about other people’s motives seems to be a domain in which “I believe that he hates me” or “I hypothesize that he hates me” might work a lot better.

Probabilistic reasoning is also a remedy for similar reasons: Implicit in a 75% probability of X is a 25% probability of not-X, so you’re hopefully automatically considering more than one world. Assigning a probability also inherently reminds you that you’re occupying an epistemic state, since only beliefs can be probabilistic, while reality itself is either one way or another.

Foreign Policy ran an interview this week with Naval analyst Chris Weuve about the plausibility of various space warships and tactics (with a particular focus on Battlestar Galactica:

FP: You seem particularly concerned about the “aircraft carrier in space” concept.

CW: I don’t think “concerned” is the right word. Let’s call it amused. Aircraft carriers are a particularly good model to illustrate how the differences between the ocean and the air really drive how naval combat works, and hence don’t work so well when converted to space. An aircraft carrier is built around three things: the flight deck, which functions as the airplanes’ doorway between the sea and the sky, and also the parking lot for the airplanes; the hangar deck, where essential aircraft maintenance is carried out; and the propulsion spaces, because you really want that flight deck to be moving fast to generate wind over the deck, which in turn makes it easier to land and take off. Everything about the “airport” aspects of an aircraft carrier point towards making it big: big engines, and big flight deck that is also elevated away from the turbulence of the ocean surface. So, since you need a big ship anyway, we decide to put a lot of planes on, plus extra fuel, command and control facilities, a hospital, a post office, and so on. You name it, an aircraft carrier has it.

But in space, you don’t need that doorway between the sea and the sky, because your “fighter” is operating in the same medium as the mothership. You don’t need a flight deck. You just need a hatch, or maybe just a clamp that attaches the fighter to the hull if you don’t mind leaving it outside. You don’t need the big engines or the big elevated flight deck. And hence it doesn’t make nearly so much sense to put all of your eggs in one basket. There might still be some efficiencies in grouping them together, but the fighters are probably more analogous to helicopters rather than F-18s. Almost every ship in the U.S. Navy carries a helicopter, or at least could temporarily.

Information is Beautiful has had its first annual awards ceremony.  I think my favorite is Notabilia’s interactive visualization on Wikipedia arguments for deleting threads.  Click to see it. 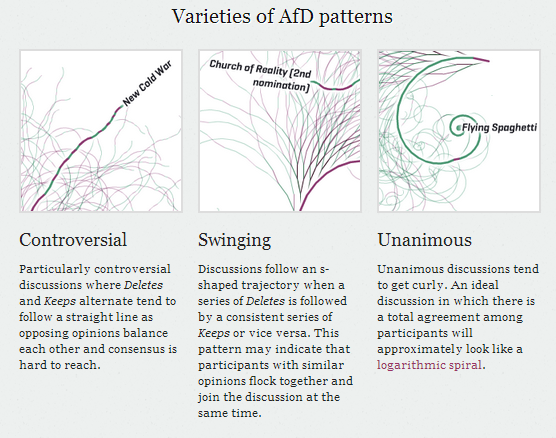 Most of this has been Yay Science! geekiness, so let’s close out on Yay Humanities!  The Atlantic has been doing a series on how to teach writing, and my favorite installment is “The Writing Revolution” which follows one school’s attempt to go back to basics and make sure the students understand the structure and logic of language.

Maybe the struggling students just couldn’t read, suggested one teacher. A few teachers administered informal diagnostic tests the following week and reported back. The students who couldn’t write well seemed capable, at the very least, of decoding simple sentences. A history teacher got more granular. He pointed out that the students’ sentences were short and disjointed. What words, Scharff asked, did kids who wrote solid paragraphs use that the poor writers didn’t? Good essay writers, the history teacher noted, used coordinating conjunctions to link and expand on simple ideas—words like for, and, nor, but, or, yet, and so. Another teacher devised a quick quiz that required students to use those conjunctions. To the astonishment of the staff, she reported that a sizable group of students could not use those simple words effectively. The harder they looked, the teachers began to realize, the harder it was to determine whether the students were smart or not—the tools they had to express their thoughts were so limited that such a judgment was nearly impossible.

The exploration continued. One teacher noted that the best-written paragraphs contained complex sentences that relied on dependent clauses like although and despite, which signal a shifting idea within the same sentence. Curious, Fran Simmons devised a little test of her own. She asked her freshman English students to read Of Mice and Men and, using information from the novel, answer the following prompt in a single sentence:

She was looking for a sentence like: Although George worked very hard, he could not attain the American Dream.

Some of Simmons’s students wrote a solid sentence, but many were stumped. More than a few wrote the following: “Although George and Lenny were friends.”

A lightbulb, says Simmons, went on in her head. These 14- and 15-year-olds didn’t know how to use some basic parts of speech. With such grammatical gaps, it was a wonder they learned as much as they did. “Yes, they could read simple sentences,” but works like the Gettysburg Address were beyond them—not because they were too lazy to look up words they didn’t know, but because “they were missing a crucial understanding of how language works. They didn’t understand that the key information in a sentence doesn’t always come at the beginning of that sentence.” 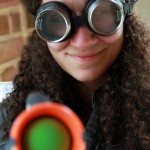 October 5, 2012 You Shall Know Them By Their Fruits
Recent Comments
108 Comments | Leave a Comment
Browse Our Archives
get the latest from
Catholic
Sign up for our newsletter
POPULAR AT PATHEOS Catholic
1