Javert: No Quarter Asked or Given

Javert: No Quarter Asked or Given December 26, 2012 Leah Libresco

I first saw Les Miserables when I was in middle school, I think, and I was on the edge of my seat from the opening number.  But the moment that transfixed me was Javert’s joyous “Stars.”  I was in love.

There was nothing I wanted so much as to be like that man, ramrod-straight, inviolate, and wholly consecrated to duty.  In fact, when informed of my conversion, one friend, initially puzzled, said, “Well, I guess you’ve always been a bit of an absolutist.”  But my Javertian tendencies are as incompatible with Christianity as Javert is with the world of Jean Valjean, so I thought the release of the film might be a nice time for some meditations on the Inspector.

Valjean and Javert are opposed, not only in their relationship to each other, but in their relationship to the grace and forgiveness that each is offered.  Valjean, newly released from prison, robs a bishop who extravagantly forgives him.  Javert is discovered as a spy among the revolutionaries, and Valjean volunteers to carry out his execution, but secretly spares his life and sets him free.

Each man is thrown into confusion by the mercy they have been shown, and their two epiphanies musically compliment each other.  The repetition of the melody draws attention to the divergence of the lyrics uttered and conclusions reached by these two men.  Valjean recognizes that the bishop has set a new way before him, and wonders if he has the strength to remain vulnerable and open to the world, after enduring so much.  He asks, “Yet why did I allow that man to touch my soul and teach me love?”  (By the way, the Valjean below is playing the bishop in the new movie).

Unlike Valjean, Javert does not believe he has committed any crime that Valjean has the authority to forgive him for.  Valjean’s mercy is an act of presumption, overturning the antipathy that Javert feels is natural and proper to the relationship between criminal and lawman.  Unable to accept Valjean as his equal, Javert can only conceive of a new, intolerable hierarchy (“How can I now allow this man to hold dominion over me?”)

Valjean and Javert are both offered unexpected grace, and Javert chokes on it.  When the two men meet for the last time after Valjean’s act of kindness, Javert greets him scornfully by saying “The man of mercy comes again and talks of justice.”  For Javert, the two ideals are incompatible.  A man can make sense of justice and live within the law, but mercy is unfair and unpredictable.  And the fact that this grace is unfair in his favor only makes it more dishonorable to accept it.

In the book (and in the film version), Javert suspects Valjean and turns him in while serving under him as mayor.  When the discovery of the false Valjean proves him wrong, Javert asks to be dismissed from his post.  He says:

“In my life, I have often been severe toward others.  It was just.  I was right.  Now if I were not severe toward myself, all I have justly done would become injustice.  Should I spare myself more than others?  No.  You see!  If I had been eager only to punish others and not myself, that would have been despicable.  Those who say, ‘That scoundrel Javert’ would have been right.  Monsieur Mayor, I do not wish you to treat me with kindness.   Your kindness, when it was for others, enraged me quite enough; I do not wish it for myself… Such kindness disorganizes society.  Good God, it is easy to be kind, the difficulty is being just.”

Some of the movie reviewers have called Javert the villain of the piece and implied that he’s motivated by vengeance or cruelty, but Javert is scrupulously fair.  He is like a peculiar ascetic; denying any mercy or forgiveness to himself leaves him free to be indifferent to others.  But to yield even once would damn all his previous actions.  If he admits that mercy is to be longed for, then his idolatrous God of Law is dead, and he must look back over all the works of his strength and joy and righteousness in shame.

Javert doesn’t want enough.  He would prefer a mean sort of fairness to grace, because it lies in his power to achieve one and not the other.  By only accepting standards he can achieve, he betrays those who would have benefited from even his fumbling attempts at kindness.  He refuses to become visibly imperfect in the service of a higher perfection.

I can finally cry to Javert, in the words of G.K. Chesterton in Orthodoxy

Nevertheless he is wrong. But if we attempt to trace his error in exact terms, we shall not find it quite so easy as we had supposed. Perhaps the nearest we can get to expressing it is to say this: that his mind moves in a perfect but narrow circle. A small circle is quite as infinite as a large circle; but, though it is quite as infinite, it is not so large… There is such a thing as a narrow universality; there is such a thing as a small and cramped eternity…

[I]s it really in your small and painful pity that all flesh must put its faith? How much happier you would be, how much more of you there would be, if the hammer of a higher God could smash your small cosmos, scattering the stars like spangles, and leave you in the open, free like other men to look up as well as down! 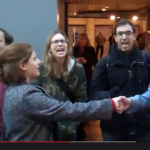 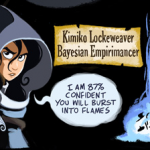 December 27, 2012 Up for a Quest?
Recent Comments
162 Comments | Leave a Comment
Browse Our Archives
get the latest from
Catholic
Sign up for our newsletter
POPULAR AT PATHEOS Catholic
1