Let’s have a Math-Theology Bookclub! 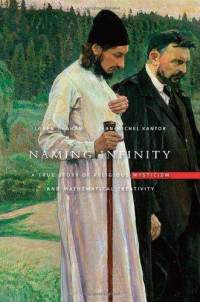 Guys, my life is really really wonderful right now.  I just found out about the existence of Naming Infinity: A True Story of Religious Mysticism and Mathematical Creativity, and my cup runneth over.  Here’s an excerpt from the review in The New Republic.

The Name Worshippers of Mount Athos had been shut down. What mattered most were the defiant interruptions to the angry sermon of Archbishop Nikon of Vologda, who had marched into the monastery courtyard behind the troops. “You mistakenly believe that names are the same as God,” his voice trembled. “But I tell you that names, even of divine beings, are not God themselves.” Corralled, water-drenched, their arms twisted violently behind their backs, the monks would not be silenced. “Imia Bozhie est’ sam Bog!” some of them were clearly heard shouting, their eyes alight. “The Name of God is God!”

…Throwing himself into set theory back in Moscow, Luzin maintained strong ties with Florensky, and here is where the escapades of the monks of the Aegean return to our story. It is not clear precisely when both men first learned of Name Worshipping, but already in 1906 they enjoyed calling each other by names other than their own. When news of the rebellion on Mount Athos reached Russia in 1913, Florensky spoke up publicly in its favor, and befriended monks who had endured firsthand the navy’s brutal attack on St. Pantaleimon. Soon two worlds were becoming entwined. Lebesgue had asked whether a mathematical object could exist without defining (meaning naming) it, and now the answer was becoming clear. Just as naming God via glossolalian repetition was a religious act that brought the deity into existence, so naming sets via increasingly recursive definitions was a mathematical act that conferred a reality in the world of numbers. Cantor and before him the ancient Neoplatonists had shown the way, but this was only the beginning. Infused with mysticism, Florensky believed, new forms of mathematics and religion were being born, ones that by rejecting determinism would rescue mankind from catastrophe. In both cases—God and infinity—the key to bringing abstractions into reality was bestowing upon them a name.

Here are some things I love:

(Also Stephen Sondheim, but he’s not as immediately relevant here).

A copy of Naming Infinity is winging it’s way to me, and I’d like to invite commenters here to read along at home and contribute posts and comments in February.  I’m hoping this can be like last summer’s Sondheim Symposium, where some of you watched Company and Passion with me, and contributed posts with enough context to let everyone follow along.

I’m going to try and hassle some of my offline friends into doing this, and if you’re interested in reading and posting along, please email me (leahDOTlibrescoATgmailDOTcom) and sound off in the comments.

BONUS: Since we don’t all have copies of the book yet, let’s still do some fun math reading today and check out Scott Aaronson’s essay “Who can name the bigger number?”  Here’s a teaser:

To introduce a talk on “Big Numbers,” I invite two audience volunteers to try exactly this. I tell them the rules:

You have fifteen seconds. Using standard math notation, English words, or both, name a single whole number—not an infinity—on a blank index card. Be precise enough for any reasonable modern mathematician to determine exactly what number you’ve named, by consulting only your card and, if necessary, the published literature.

…Place value, exponentials, stacked exponentials: each can express boundlessly big numbers, and in this sense they’re all equivalent. But the notational systems differ dramatically in the numbers they can express concisely. That’s what the fifteen-second time limit illustrates. It takes the same amount of time to write 9999, 9999, and

yet the first number is quotidian, the second astronomical, and the third hyper-mega astronomical. The key to the biggest number contest is not swift penmanship, but rather a potent paradigm for concisely capturing the gargantuan.

Such paradigms are historical rarities. We find a flurry in antiquity, another flurry in the twentieth century, and nothing much in between. But when a new way to express big numbers concisely does emerge, it’s often a byproduct of a major scientific revolution: systematized mathematics, formal logic, computer science. Revolutions this momentous, as any Kuhnian could tell you, only happen under the right social conditions. Thus is the story of big numbers a story of human progress.

January 2, 2013
Two Terrible Ways to Have Sex
Next Post

January 4, 2013 7 Quick Takes (1/4/13)
Recent Comments
133 Comments | Leave a Comment
""Do you honestly think that a child raised by a woman has no exposure to ..."
Zorin 2012 Queer Blogathon [Index Post]
"I'd love to see a video of how it works. keranique shampoo reviews"
Marlene Garza Welcome Camels with Hammers to Patheos!
"Logismoi (the plural of logismos) are a fairly simple concept; they are whispers from either ..."
Rob, Portland Logismoi, Vampires, and Other Intrusive Thoughts
"I imagine I’ll do a lot more reading and pick a lot more fights over ..."
Donalbain A little about the queer stuff
Browse Our Archives
Follow Us!

No, God Did Not Send Coronavirus...
On the Catholic Beat
Related posts from Unequally Yoked