Here’s the roundup of my most recent writing for The American Conservative, which includes math nerdery, political science research, Snowden coverage, and, best of all, a theatre review.

When I learned my times tables, the kinds in my class used the fingers trick for remembering the nine times table. Just hold up all ten fingers, palms in, and then, counting from the left, put down the nth finger (where n is the number you’re multiplying by nine). So, for nine times four, I’d put down the ring finger on my left hand. Then, I can count the numbers on either side of the gap, and read off my hands that the product is 36.

The trick is fast, but relatively useless. (I haven’t used it since the third grade). Adults wind up memorizing multiplication because of frequent use, so, especially in an age of calculators, any computational method should end up teaching us something besides just the correct answer. The aim of these new methods is to help students get an intuitive sense for how numbers combine, not just for the answer.

Pricing the Cost of a Congressman

GiveWell, one of the leading firms in the effective altruism movement, has beenexploring the possibility of adding political advocacy to their list of recommended giving opportunities. GiveWell takes a utilitarian approach to charity, auditing their recommended causes not just for the percent of their funds spent on salaries and overhead, but for the measurable impact each marginal dollar for the cause can buy. If GiveWell were to recommend political advocacy, it would be because their researchers had been able to assess the projected impact of money on a policy issue near a tipping point, and rated it a good buy.

When charity firms can set up thermometer style fundraising drives, promising donors that if they can close the gap, a charter school bill will be passed, Americans may wind up with a sour taste in their mouths. It’s true that, at present, advocacy groups make similar pitches (“Donate NOW to Block Bill X”), but voters may find the implicit costs of purchasing influence more aesthetically acceptable than explicit models and pricing.

There’s new evidence that Obama lied when he said, “that the United States is not spying on ordinary people who don’t threaten our national security.” According to the latest Snowden disclosures, the NSA has a program, code-named MYSTIC, that allows the agency to record and store all calls made within an undisclosed country, including those made by American citizens.

If this program were going to be leaked at all, the NSA might prefer the information was dribbled out this way. When the disclosures are so vague, it’s hard to know how to respond. There’s no single country that can act the victim or rebuke the United States, as there was when we got caught tapping Angela Merkel’s phone or grounded the Bolivian president’s plane though it wasn’t even within U.S. airspace. With no clear victims, there’s not enough information for a Rand Paul-style class action suit.

Folger’s “Richard III”: Something Rotten in the State of England

It seemed like the audience’s unique perspective was being carried over from his soliloquies and asides to the entire text of the play. We witnessed Richard’s naked contempt, even as he presumably presented a more flattering face to his targets.

But that hypothesis was disproved by Act III, Scene VII, when the audience was finally explicitly cast as Richard’s audience. As his accomplices, Buckingham and Catesby, whip up the Lord Mayor and the people of London to acclaim Richard as King, the Mayor stands in the aisle, and the audience represents the throng he leads.

There should be no asides in this scene, since any moment that Richard drops the mask and reveals his ugliness to the audience, he would also be revealing it to his subjects. However, this Richard continued to roll his eyes, sneer his lines, and exaggeratedly pretended to pray throughout the scene.

I began to wonder if I had been mistaken. Perhaps the audience had never seen a private side of Richard, and he really had been this snide and unsubtle to all the characters from the beginning. If this Richard can succeed—by pure brutality—there’s something rotten in the state of England. 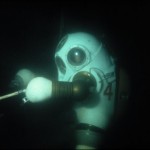 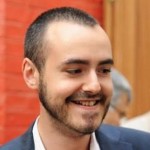 March 24, 2014 The PEG who dwells with us
Recent Comments
0 | Leave a Comment
"Oh! And you can get there via Naval Gazing.(probably not by Navel Gazing...)"
TheSparksFlyUpward Too Sucky To Be True
"Hello, Deiseach!1. This is not an ad. (It always reassures me when someone says that!! ..."
TheSparksFlyUpward Too Sucky To Be True
""Do you honestly think that a child raised by a woman has no exposure to ..."
Zorin 2012 Queer Blogathon [Index Post]
"I'd love to see a video of how it works. keranique shampoo reviews"
Marlene Garza Welcome Camels with Hammers to Patheos!
Browse Our Archives
get the latest from
Catholic
Sign up for our newsletter
POPULAR AT PATHEOS Catholic
1