So Small a Cloud of Witnesses

In Arthur C. Clarke and Stephen Baxter’s The Light of Other Days, a scientist invents little wormholes that function as peepholes.  You can peer back from the present to any point in time before now, or in the present, and society struggles to cope with its sudden transparency.

People peer at each other or watch the original productions of Shakespeare, but something very odd happens when the viewers in the novel try to look back at the Crucifixion, the day we remember on Good Friday.

The moment of His death is oddly obscured; WormCam exploration there is limited. Some scientists have speculated that there is such a density of viewpoints in those key seconds that the fabric of spacetime itself is being damaged by wormhole intrusions. And these viewpoints are presumably sent down by observers from our own future— or perhaps from a multiplicity of possible futures, if what lies ahead of us is undetermined… Even now, despite all our technology, we see Him through a glass darkly.

It’s funny to think of that moment as being choked with eyes, when, in the Gospels, all the disciples (save John) fled the crucifixion.  They witnessed His resurrection, but not His death.

Clarke is probably correct to guess that, if we could, we’d want to peer back to Golgatha, that it feels as though we, along with the frightened disciples, missed something that needs to be seen.  But we, like the disciples, have the opportunity to see Christ glorified, even though we were absent at his death.

In Catholicism, the Eucharist is our communion with Christ’s sacrifice.  By eating his Body and drinking his Blood, we have the opportunity to partake of His death.  As mortal creatures, we know death already, but Christ’s is unique in that it was followed by new life.  We come to the moment of His death so that He can lead us through and past our own.

But, on Good Friday, no priest consecrates bread and wine in the Catholic Church.  Communion is served from presanctified wafers held in reserve from Holy Thursday.  Like the disciples, we struggle to stay close to our Teacher, and rely on Him to come back and find us, even when we lose the path or forget his face.

Today whets our longing and helps us repent of the times it is we who were absent.

Drew, a reader of and commenter on this blog, is being received into the Catholic Church in Easter, so please feel free to join me in praying for him to his confirmation saint: Blessed Ramon Llull. And today’s the day to start the Divine Mercy Novena, if you plan to do so.

April 16, 2014
The Epistemological Peril of Punching Down
Next Post 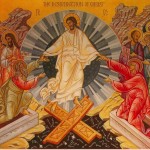 April 19, 2014 The Last Enemy to be Destroyed is Death
Recent Comments
0 | Leave a Comment
Browse Our Archives
Follow Us!