In a bit of counterprogramming for Mother’s Day, Scott of Slate Star Codex has put up a meditation on the unchosen, limitless debts that family entails.  He opens by considering the responsibility of children to take care of incapacitated parents.  We all tend to agree that you have some obligation to parents, but our moral reasoning becomes very muddled when it comes to the question of whether you must become a caretaker in your own home or may outsource care to a nursing home. The excerpt below doesn’t do justice to Scott’s entire piece but is meant to entice you to read the whole thing:

If infinite debts make everyone miserable, then by the decision theoretic definition of morality above we might decide to forgive them. After all, every mother was also a child, and it may be that, at the point where you’re making timeless acausal Platonic contracts, everyone agrees to free their child from a debt to them as long as they are themselves freed from debt to their parents. Maybe they would agree that infinite creditors deserve a certain level of respect, very very high respect, but not enough that it ruins your life…

None of those things clear your debt, exactly. But they keep you in good standing. You pay a tiny fraction of your debt, year after year, and it keeps the moral repo man from your door.

The problem with infinite debts is that they are really hard to repay. On the other hand, the interest can be quite manageable.

I managed to be the first one into the comments section to reference Fr. Zosima from Dostoevsky’s The Brothers Karamazov.  Christianity is pretty heavy on the “infinite debts” front.  Before you even get up to Christ’s sacrifice, there’s the infinite debt of being brought into (and sustained in) existence by God.  In Karamazov, Fr. Zosima is an elder in the local monastery and offers the instruction below to his fellow monks:

But when he knows that he is not only worse than all those in the world, but is also guilty before all people, on behalf of all and for all, for all human sins, the world’s and each person’s, only then will the goal of our unity be achieved. For you must know, my dear ones, that each of us is undoubtedly guilty on behalf of all and for all on earth, not only because of the common guilt of the world, but personally, each one of us, for all people and for each person on this earth. This knowledge is the crown of the monk’s path, and of every man’s path on earth. For monks are not a different sort of men, but only such as all men on earth ought also to be. Only then will our hearts be moved to a love that is infinite, universal, and that knows no satiety. Then each of us will be able to gain the whole world by love and wash away the world’s sins with his tears.

After a speech like this, you might wind up trying to pay (in Scott’s phrasing) the interest on your debt — doing the kindnesses within your grasp, so as to make some contribution, despite your insufficiency.  But one of the follow-up comments helped clarify, by contrast, why this feeling of infinite debt doesn’t lead to despair.

No sooner had I posted than one of the other commenters jumped in to say that Fr. Zosima sounded like a Rand villain (good!), and another came along to provide a corroborating quote.  In The Fountainhead,  Ellsworth Toohey offers the following explanation of his methods:

There are many ways. Here’s one. Make man feel small. Make him feel guilty. Kill his aspiration and his integrity. That’s difficult. The worst among you gropes for an idol in his own twisted way. Kill integrity by internal corruption. Use it against himself. Direct it towards a goal destructive of all integrity. Preach selflessness. Tell man that altruism is the ideal. Not a single one has ever reached it and not a single one ever will. His every living instinct screams against it. But don’t you see what you accomplish ? Man realizes that he’s incapable of what he’s accepted as the noblest virtue – and it gives him a sense of guilt, of sin, of his own basic unworthiness.

Toohey doesn’t believe man was made for altruism.  The problem is not just that he can only approach it asymptotically–it’s that the closer he gets, the wronger he feels.  Christianity agrees that kindness is hard, but also claims that it’s the way we can be most authentically ourselves.  There is some sense of spiritual consolation as you head in the right direction, even though that relief is not a sign to slack off.

And, of course, Christians don’t believe that we’re trying to fulfill our obligations depending only on our own strength.  When we pray, we’re asking God to lend us strength (or help us to stop resisting the help we’ve been offered).  We’re really asking for new credit to repay our current debt.  However, this revolving credit line isn’t quite robbing Peter to pay Paul; it creates closer bonds between us and God.

That isn’t a foreign idea to David Graeber who, in Debt: The First 5,000 Years, argues that society is held together by a kind of mutual indebtedness.

Exchange implies equality, but it also implies separation.  It’s precisely when money changes hands, when debt is cancelled, that equality is restored and both parties can walk away and have nothing further to do with each other.

Calling it “quits” means being alone.  That’s a poor position to wind up in vis a vis friends, family, or God.

May 10, 2014
The Unexpected Consequences of Laws and Lies
Next Post 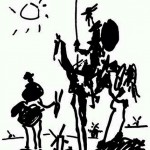