There’s an interesting piece of research going around on what makes relationships grow and deepen (versus fracture and wound).  John Gottman and Robert Levenson (the “Love Lab” researchers) were looking for the smallest kind of observational data that let them (fairly) reliably distinguish good relationships from bad.  Here’s what they found had the most power to predict the success of a marriage over its first six years:

Throughout the day, artners would make requests for connection, what Gottman calls “bids.” For example, say that the husband is a bird enthusiast and notices a goldfinch fly across the yard. He might say to his wife, “Look at that beautiful bird outside!” He’s not just commenting on the bird here: he’s requesting a response from his wife — a sign of interest or support — hoping they’ll connect, however momentarily, over the bird.

The wife now has a choice. She can respond by either “turning toward” or “turning away” from her husband, as Gottman puts it. Though the bird-bid might seem minor and silly, it can actually reveal a lot about the health of the relationship. The husband thought the bird was important enough to bring it up in conversation and the question is whether his wife recognizes and respects that.

People who turned toward their partners in the study responded by engaging the bidder, showing interest and support in the bid. Those who didn’t — those who turned away — would not respond or respond minimally and continue doing whatever they were doing, like watching TV or reading the paper. Sometimes they would respond with overt hostility, saying something like, “Stop interrupting me, I’m reading.”

These bidding interactions had profound effects on marital well-being. Couples who had divorced after a six-year follow up had “turn-toward bids” 33 percent of the time. Only three in ten of their bids for emotional connection were met with intimacy. The couples who were still together after six years had “turn-toward bids” 87 percent of the time. Nine times out of ten, they were meeting their partner’s emotional needs.

I didn’t read the methodology, so I don’t want to comment on the validity of the experimental design.  But I did think, reading it, that it seemed fairly intuitive that “turn-toward bids” is a good disposition to cultivate, in marriage and elsewhere.  Making it easy for your partner to share delight amplifies delight (and helps you to know them better, by having their loves arrayed before you).

I make a lot of bids in a relationship.  Both the boyfriends I’ve had tended to get (and sometimes still get) a lot of emails/fb posts/etc from me of articles, pictures, etc that I thought they would enjoy or that I simply enjoyed too much to keep to myself.  And that tendency isn’t limited to romantic relationships — my parents get a lot of links from me (the most recent being this — they’re history teachers) and I like to be a clipping service for some of my friends.

Even before receiving the “turn-toward” response to a bid, simply being on the lookout for things to share makes the whole world more wonderful to my sight.  I have the expectation that the things I encounter often belong with someone and that it’s a pleasure to be an intellectual yenta and make the connection.  It’s even more delightful to be able to unite over a shared interest or to have my attention drawn to some topic’s beauty because I brought it to the attention of someone who loves it and then they went on to gush in my presence.

Last night, I was attending a Christopolis talk by Sr. Anna Wray, OP, of the Nashville Dominicans, who gave us a beautiful meditation of gratitude, and ways to welcome gifts.  Sharing a relationship (whether marital or otherwise) where you are constantly alive to the gifts the world offers to your beloved seems like it would stoke our sensitivity to gifts and gratitude generally.

The partners frequently passing back and forth “Did you read?” “Did you see?”  (in the sense of “Were you struck by?” “Did you delight in?”, not the competitiveness of this Portlandia sketch) are changing their default approach to the world.  They expect to find wonder and beauty, and for its enchantedness to be both good in itself but also a way of saying “I love you” to a partner, and, perhaps, of hearing those same three words from God. 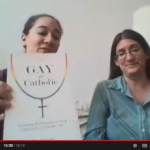