Struggling to Offer an Open House 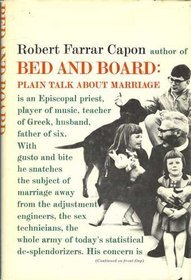 I picked up Robert Farrar Capon’s Bed and Board: Plain Talk About Marriage after reading Melanie’s post on The Wine Dark Sea on “What has Beatrice to do with Bed?”  The quotes she assembled were easily enough to get me to order the book for myself.

And I suspect they’re a little more generally appealing than the quote I want to highlight from my reading, so perhaps you want to pop over chez elle first?

I really liked Capon’s book, and, if I’m ever lucky enough to be verging on getting engaged, I’ll make sure to reread it then, and keep it around for occasional booster shots.  Capon is an enthusiast, about both Christianity and marriage, and he does a nice job of blending heady theology with practical, quotidian choices made in marriage.  (Even better, he makes it clear that this blend is baked in, and dichotomizing these two scales of “How is life to be lived?” is more distracting than not.)

One of the passages that turned out to really strike me while reading was this one (from a section where he is discussing the particular character of wifeliness):

You are not only a link with something.  You are the thing itself; and you are the sacrament, the instrument, by which we learn to love the things that are. Your body is the first object any child of man ever wanted.  Therefore, dispose yourself to be loved, to be wanted, to be available.  Be there for them with a vengeance.  Be a gracious, bending woman.  Incline your ear, your hands, your heart to them.  Be found warm and comfortable, and disposed to affection. Be ready to be done by and to welcome their casual effusions with something better than preoccupation and indifference.  It isn’t a matter of how much time; only how much intensity.  Children love fat mothers.  They like them because while any mother is a diagram of place, a picture of home, a fat one is a clearer diagram, a greater sacrament.  She is more there.

[Feel free to leave aside the question of whether this presence can only be filled by a woman for a bit — it certainly mostly has been, and when women take on other roles, men don’t by default take on this one.  Plus, by its nature, an anchoring-the-house role is hard to fill in alternating shifts.]

I was struck by this passage, because it showed me an element of hospitality/home-not-housekeeping that I hadn’t been thinking about.

I do like hospitality.  I like baking/cooking for people, I like organizing events. I like managing logistics, I like being the yenta to match up people with, say, Stoppard’s Arcadia at a readaloud party.  But my approach to hospitality doesn’t put thereness and presence at the center.  I don’t think my approach is very fat, in Capon’s sense.

When I see friends outside of events, I have to do it by scheduling (I get to have dinner every month with one friend because we pick the dates of those dinners a month in advance).  I’d be happy to have someone drop by, in theory, but the trouble with “text me if you’re in my neck of the woods” is that I’m frequently not at home, even on weeknights.  I’m ushing or at lector practice or at the CIC (not that one!).

I’m not sure which is a better encapsulation of the state of my calendar: that I had to tell the person asking me on a date “Yes, but I think I’ve booked up the rest of November already” (on Nov 18th) or that, when I had to decline going to a friend’s birthday party (announced three days in advance) because I was already committed elsewhere, one of my other friends immediately replied “[Cackles] see where your plans get you.”

Along Capon’s (expansive!) dimension of presence, I think the Good Housekeeping prize in my circle of friends might go to two male (not romantically involved) roommates who host a board games afternoon pretty much every weekend.  It’s a very stable social commitment, recurring in pretty much the same time and manner every weekend — the kind of thing you can come home to, an event that is there waiting for you.

That’s relatively unusual for individuals (rather than institutions) to offer.  In the much-longer-than-it-used-to-be interregnum between leaving our childhood families and beginning families of our own, people in my demographic set spend a very long time without the fat mother of Capon’s imagining.   There is not a place for us to expect to be able to rest, whenever we are moved to, in the presence of others (a room of one’s own satisfies a separate purpose).

Since it will be a good long while before I need to worry about being a fat mother to children or a husband, I’m left wondering how I can or should develop this skill at present.  I’m reluctant to pare back my plans, just in order to be generally on call, but I wonder if I should try scheduling regular “Open House” events where, on the same weekend every month, I’m known to be home and baking, in case people want to drop by.

How have people, outside traditional families, been “fat mothers” to you?  What have you tried (both successful or not) to cultivate this aspect of hospitality, as opposed to other subcomponent skills/dispositions? 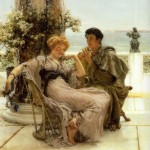