I’ve usually avoided Drunk History (a show where heavily in their cups historians summarize a notable life or event, and then have their garbled retellings reenacted by actors) because I saw an episode that involved vomiting, which I’d prefer not to see.

But this episode about Harriet Tubman’s in the Civil War (about which I knew nothing, and in which she’s played by Octavia Spencer) is excellent (and involves no sickness at all, no promises if you check out other episodes).

Speaking of unexpected good works, I found it really interesting to read through GiveWell’s list of non-existent charities that they’d like people to found so that they can fund them.

Charities that implement GiveWell’s priority programs: vitamin A supplementation, immunizations, conditional cash transfers, micronutrient fortification, or even bednets and deworming (since our top charities that focus on the latter two have limited room for more funding). More
Charities implementing potential priority programs that are particularly challenging, particularly those revolving around (a) treatment of treatable conditions in a hospital or clinic setting; (b) behavior change for improving health. We see several hurdles to successfully focusing on such programs, but would be excited to see charities that overcome such hurdles. More
Charities that collect or generate information and data relevant to our recommendations. Currently, we recommend charities based partly on the data they themselves collect and share. But we could potentially recommend an organization that does not, itself, collect and share strong monitoring data, if we had independent data showing its activities’ effectiveness. More

They have a lot more details at the link.

GiveWell does a great job looking not only at what we know now, but at what we’d need to learn more about charity effectiveness.  Also in the vein of good epistemological practices, I liked this homework assignment:

And this strikes me as a really useful homework problem, because the art of finding counterexamples is essential to writing algorithms; it’s how you tell whether your algorithm actually works.  (I mean, you can try proving it formally, and if the proof doesn’t work, that can help you find flaws in your algorithm.  But it’s often much faster to think of a counterexample.)  I remember that my undergrad algorithms professor was really good at finding counterexamples, and I was sort of awed by his ability to do so.  But prior to this homework problem, I don’t think I’d ever seen anyone explicitly acknowledge counterexample-finding as a skill that needed to be practiced.

From the annals of very clever engineering: Using synthetic DNA to authenticate paintings!

The new approach, in its formative stage, would implant synthetic DNA, not the personal DNA of the artists, because of privacy issues and because a person’s DNA could conceivably be stolen and embedded, thus undermining the authority of such a marking protocol.

The developers said the bioengineered DNA would be unique to each item and provide an encrypted link between the art and a database that would hold the consensus of authoritative information about the work. The DNA details could be read by a scanner available to anyone in the art industry wanting to verify an object.

From the annals of very silly lifehacks: Body builders who spend time in a miniature village to feel even bigger!

Here’s how much Mallory Ortberg loved it, need you know more?

Every moment is to be savored without explanation. Do not look for context. I don’t ever want to know anything more about this video than I do right now. I don’t care if it’s a hoax, or a viral marketing ad for creatine, or anything else. I don’t care.

Back to actual cleverness: I learned how to prove Fermat’s Little Theorem in high school, but the method I learned was a lot fiddlier and less layperson friendly than this very nice method shown by Khan Academy.  I promise you, there are no prereqs for this and it’s delightfully done.

Finally, my life is still very all-Hamilton, all the time (a scandal on Borgen (a Danish political drama) prompted a chorus of “Never gon’ be Statsminister now!” and my friends keep writing Paul Ryan-themed relyricizations as the House drama plays out).

If the upshot of all this is that there’s more of a market for implausible-on-paper musicals about historical figures, I am totally on board.  Particularly for this:

Maybe only an opera could do justice to the scope of the forces at work [in the clash between Robert Moses and Jane Jacobs on urban planning], and pretty soon we’ll have one.

[T]he team has been working hard to distill the narrative essence of the Moses-Jacobs conflict, which the opera frames as a love triangle—with both Jacobs and Moses “vying for the love of the city.”

“The biggest challenge is we don’t want to make this, Moses is Darth Vader and Jacobs is a perfect angel from heaven,” says Frankel. “It’s more interesting artistically to see them both as human beings with strengths and weaknesses. We are figuring out how to do it with Moses more easily. Jacobs is more difficult. She is just so darn right, so much.”

October 22, 2015
How To Offer Community Without Communion
Next Post 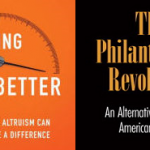