Over at FiveThirtyEight, I did a little high school physics math to see how high you’d have to start to really drop the New Year’s Eve ball.  And what would happen when it hit the ground.

The ball drop in Times Square happens too slowly for my taste. Just before midnight, the LED-studded ball will inch down its pole at a speed of 1.2 feet per second. That’s slower than the CDC-defined moderate walking pace of 3 miles per hour, or 4.4 feet per second.

Call me a woman of exacting standards, but if I can outpace the ball at a gentle amble, I’m a little reluctant to call its descent a “drop.” So I went ahead and did the Times Square Alliance the favor of calculating exactly how they could pull off a true ball drop in freefall.

That means the party will have to leave Times Square; there’s only one building in New York City tall enough for the task…

And if you want more seasonal news from our crack statistics team, I joined my co-worker Walt Hickey to kibbitz about the dance moves of Peanuts characters in the Charlie Brown Christmas Special.  (Yes, there’s technically a stat angle — Walt ran a survey to discover which dancers were people’s favorites)

Leah: These are pretty hesitant moves, but if she did this with a little more force, she could be rocking a bullfighting/paso doble thing.

Walt: Right, so I have a specific love for the girl in green, mainly because I, like most people, have been to a middle school dance. This is the dance that you do before your friend in the eighth grade tells you to stop using your arms so much.

Leah: My default in those moments was the Twist.

Walt: My default was “I want to punch the air, but the air right above my head, in particular.” I don’t really disagree with this ranking, but I admit I see far too much of my younger self in the girl in green.

Leah: Just so you know, the usual instruction for stage punches is “Punch a parrot on the shoulder of your scene partner.” You’re pretty close. 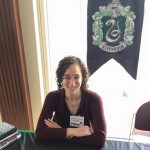 December 22, 2015
Lewis, Chesterton, and Card on Our Tolerance for Mystery
Next Post 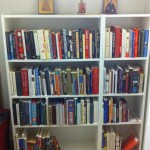 January 1, 2016 Books on deck for me in 2016
Recent Comments
0 | Leave a Comment
Browse Our Archives
get the latest from
Catholic
Sign up for our newsletter
POPULAR AT PATHEOS Catholic
1

Cork Board May 8
"May, with alle thy floures and thy grene, Welcome be thou, faire,...
view all Catholic blogs
What Are Your Thoughts?leave a comment
Copyright 2008-2021, Patheos. All rights reserved.
error: Content is protected !!