A Bible-based “hotline” that’s no help at all. 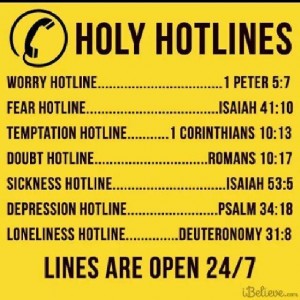 The meme above crossed my Internet path today. I was going to print it out and hang it on my refrigerator next to my plumber’s name and number—except then I realized that while my plumber can actually help me, this list of Bible verses is more likely to hurt rather than to help me or anyone else.

Let’s take a look at the actual Biblical text behind these “hotlines”:

Cast all your anxiety on him because he cares for you.

This is fine for what it is. But it does nothing to address any real issue in anyone’s life. “Stressed about your job, your spouse, your money, your kids, your health? No worries: God cares for you!” Comfort fail.

So do not fear, for I am with you; do not be dismayed, for I am your God. I will strengthen you and help you; I will uphold you with my righteous right hand.

This Old Testament verse certainly sounds good. And I do think that God can provide such encouragement to us. But that’s not the message being delivered here. This is written to the nation of Israel, not to individual Christians. Appropriating God’s words to Israel as a personal antidote against fear is Biblically dishonest. It’s either disingenuous or ignorant to pull a Bible verse entirely out of its context and then use it to convey your own thoughts and feelings.

No temptation has overtaken you except what is common to mankind. And God is faithful; he will not let you be tempted beyond what you can bear. But when you are tempted, he will also provide a way out so that you can endure it.

Paul is here talking primarily about idolatry. Verses 5 through 12 of this chapter place Paul’s encouragement in a sobering light: in the past, he says, those who faced temptation and failed faced severe judgement. (“We should not test Christ, as some of them did—and were killed by snakes. And do not grumble, as some of them did—and were killed by the destroying angel.” [!] True temptations and trials are not simple matters, and the “way out” that God might provide from them is often far from clear.

Consequently, faith comes from hearing the message, and the message is heard through the word about Christ.

Here Paul is talking about preaching the Gospel throughout Israel. What is clear from this passage (not to mention from common sense) is that you can’t directly believe in Christ without knowing about him; in order to be a Christian, one must first hear the message of Christianity. One can only wonder how that fact is supposed to ameliorate one’s doubts about Christ, Christianity, the Bible, or anything else. I suspect that what’s being implied here is not that it’s okay for a person to doubt and ask questions about their faith, but rather that when a person is faced with doubt, the solution is to speak the Gospel to them even louder. Because we all know how that helps.

But he was pierced for our transgressions, he was crushed for our iniquities; the punishment that brought us peace was on him, and by his wounds we are healed.

Part of the famous “Man of Sorrow” passage in Isaiah, this verse is usually viewed by Christians as referencing Jesus. If so, the context is then Christ’s death on the cross and the resulting effects of the Atonement. Regardless of one’s particular understanding of the Atonement, one thing is unarguable: Jesus’ death on the cross didn’t cure all the sickness in the world. If you’re sick, whether from a cold or cancer, saying “Jesus died on the cross: by his wounds we are healed” belittles your illness and  Christ’s death. Not. Helpful.

The LORD is close to the brokenhearted and saves those who are crushed in spirit.

Whenever Biblical remedies for depression are offered, huge red flags should go up. Sure, if you’re feeling a bit down there’s much encouragement to be found in the Psalms. But depression can’t be wiped away with a few lines of ancient poetry. True depression is a serious medical condition that requires professional treatment. The idea that a Bible verse can cure depression is not only wrong, it’s dangerous.

The LORD himself goes before you and will be with you; he will never leave you nor forsake you. Do not be afraid; do not be discouraged.

This verse has no relevance to loneliness. It’s Moses speaking directly to Joshua, telling him to lead Israel to invade the land of the Canaanites. It’s part of a pre-battle pep talk, a precursor to war and genocide. A few verses earlier, Moses says to the people of Israel: “The LORD your God himself will cross over ahead of you. He will destroy these nations before you, and you will take possession of their land…The LORD will deliver them to you, and you must do to them all that I have commanded you.” If psyching yourself up for battle makes you feel less lonely, I think it reasonable to suggest that loneliness isn’t your main problem.

Perhaps this meme wasn’t worth dissecting; it’s a bit, I know, like shooting fish in a barrel. And to be clear, I do think we should turn to God when we’re afraid or depressed or worried or sick. But offering up excised Bible verses as emotional panaceas for real emotional problems is spiritually, psychologically and even physically dangerous. It’s sad that so many Christians keep doing it anyway. 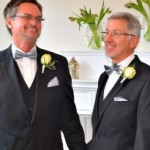 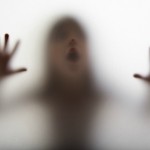 October 30, 2013 Pastor: "He should have killed you. At least you'd have died a virgin."
Recent Comments
30 Comments | Leave a Comment
"6 Bible results for "be kind":2 Chronicles 10:7They replied, “If you will be kind to ..."
Jim E Jones Seven ways Christians blow it
"Uh...no?"
Tiny J Seven ways Christians blow it
"GOd came to save us from eternal separation from God by dying on a cross?Do ..."
Bones Did Jesus speak more about Hell ..."
"Eternal separation from God"
SPH Did Jesus speak more about Hell ..."
Browse Our Archives
Related posts from Unfundamentalist Christians