Invented by chickens? Exploding art to deter gang violence? Mysterious corn drawings appearing from the beyond? What in the universe am I talking about, why veve drawings of course, the sacred symbols of Vodou. No one is precisely sure how they initially came to be, but folklore abounds on the topic. Some believe that they were created originally from the patterns in the dirt that were formed by the chickens and other animals during ceremony. I have even spoken to some scholars who believe that they are cross-cultural symbols from the cosmos. Whatever their origins they are an integral part of the Vodou tradition.

A veve is traditionally drawn on the open earth with cornmeal, flour or coffee. The person drawing the veve is supposed to use both hands, to symbolize the pathways into the world of the visible and the invisible. It is most commonly situated around the centerpole or poteau mitan, which forms another conduit for the divine to travel upon. When the veve drawing is completed, the next step is to bless it with sacred waters and/or alcohol (most often rum.) During the ceremony practitioners dance barefoot on the drawings. This is said to facilitate the bringing of the divine energies into their bodies, most often through spirit possession. In this way veves set the stage for the communion and communication with the divine. In my documentary, Bodies of Water, a New Orleans Voodoo practitioner refers to them as “direct cell numbers to the Lwa (deities.)”

Each Lwa has their own specific veve, some even have more than one. Very often they showcase the characteristics as well as attributes of the divinities. For example, one veve for the goddess Aida Wedo features both her serpentine form and the sacred rainbow she is said to travel upon. Ogou veves frequently feature knives or swords. Papa Legba veves traditionally feature both a sacred crossroads and his signature cane. There is also the interesting tendency for veves to compliment and add to each other. Very often in addition to the veve that would be drawn for the corresponding ritual, veves are drawn to illustrate sacred myth and connection between deities. If a ceremonial veve was being drawn for Damballa Wedo, very often one would be drawn too for his divine spouse Aida Wedo. I have attended rituals where veves began to “magically” appear from the shadows cast in the space. I have heard of people casting veves in gunpowder for protection. Even one time I felt, as did many others in

attendance, an ancestor veve turn into an icy hand and attempt to pull us down. These manifestations, however, are just the beginning.

Veves are, thankfully and artfully, not limited only to their cornmeal form. Metal veves are also popular creations in Haiti. This allows for a more permanent representation/connection to spirit. Veve tattoos have also become popular of late, which allows for the ultimate permanence. One practitioner explained his reasoning by saying “it allowed [him] to offer up his own blood and skin as a sacrifice.” For something less permanent I have known of people who use henna to temporarily connect with a particular energy through the veve form. Recently there has been a fortunate increase in the supply of jewelry and other finery that features veves. This ranges from the artful voodoo veve pendants available from Hex to the obscene apron from Krewe du Vieux Mardi Gras 2010. It seems the ever-reaching lines of a veve are limitless. 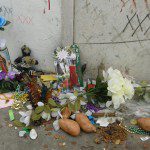 September 22, 2013
Gumbo is Gumbo: The Enmeshment of N.O. Voodoo Performance and Ritual
Next Post 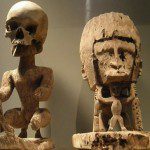 September 26, 2013 Sexy Ghosts in the City: Pagan Pride 2013
Recent Comments
0 | Leave a Comment
"I cannot speak for the author here, but my late Uncle was a psychologist, who ..."
Gordon Cooper Tarot Tools For Transformation: Mind, Body, ..."
"It's a shame the art department didn't realize they were putting two right hands on ..."
Laurie Review: Manifestation Magic By Elhoim Leafar
"The only one I heard was the Christian dogma spouted by the 700 Club (which ..."
Amanda Ingalls Taking A Look At The Top ..."
"These are a bit like Turkish war shirts, which are covered with sigils. There's even ..."
Gordon Cooper Hoodoo How We Do: Underwear Spells
Browse Our Archives
get the latest updates from
Voodoo Universe
and the Patheos
Pagan
Channel
POPULAR AT PATHEOS Pagan
1