Saints, Sinners, Statues and Syncretism in Santeria and Voodoo

One of the most puzzling things for people both inside and outside the traditions of Voodoo and Santeria, also known as Lucumi, is the inclusion of other religions’ iconography. It is not uncommon to see statues for Caridad del Cobre on an Oshun shrine, or St. Patrick during a ritual for Damballa.

If you inquire about this to practitioners, you will most likely get a variety of answers ranging from colonial oppression, to secrecy, to beliefs that these individuals were part of the religion itself. I will address these one by one, and also hopefully explain my thoughts on the matter which are probably controversial as well. If you feel that way please take the time to leave a comment below, and share your thoughts with all of us here.

The thing that one can never forget about Lucumi or Santeria, Vodou, or New Orleans Voodoo is that these were and are religions shaped and influenced by their own difficult history. These are the religions of hundreds of years of colonial oppression. These are the religions of captured and transplanted slaves, people who were uprooted from their homes, their families, and their land and forcibly relocated to places like Brazil, Haiti, Cuba, Puerto Rico, and other areas in both North and South America. These are religions, that despite all odds, survived and thrived. Highly restrictive laws like the “black codes” and the “Code Noir” severely limited what both free people of color and slaves were allowed to do. The “Code Noir” of the French colonies specifically required slaves to be baptized in the Roman Catholic tradition. This obviously presented a lot of problems for slaves clinging to their traditional faith.

Forget the Problem: It’s Part of the Solution

There is another school of thought about syncretism, or the amalgamation of different religions, in Voodoo and Lucumi (Santeria.) This stems from, I believe, the cosmology of the religions and their belief in the divine power of all things, highlighted under their concept of Ashe. Ashe or Axe is the universal life force of Afro-Caribbean religions. Everything and everyone has Ashe. The goddess Oshun, for example, has her own unique Ashe, it is present in the river, in her sacred honey, in her favorite herbs, like cinnamon or nutmeg, and most especially in the spirit of her children (devotees.) It is a short leap to see how individuals forced to use St. Lazarus, for example, to represent the god Babaluaiye, would honor and incorporate the healing miracles of this saint. One interesting element also comes into play when we realize most Catholic saint statues are made hollow. This allows devotees, both then and now, to utilize more traditional offerings for the Loa or Orisha stuffed up inside the statues. So are people worshipping the statue, the contents or both. I think for many people the answer is both. If people can become healed from their infectious diseases by praying to a statue of St. Lazarus with Babaluaiye’s ritual beans and rice inside then they should continue that practice. I have included some of the more common Saint to Orisha/Lwa correspondences below, as always each spiritual house is different and one should always follow the guidance and instruction of their godparents and elders in the tradition.

Vodou/Voodoo Associations between Saints and Lwa

Lucumi/Santeria Associations between Saints and Orisha

Our Lady of Regla- Yemaya 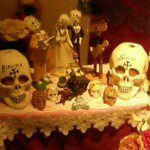 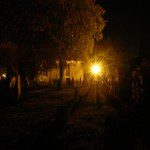