The Beautiful #BlackGirlMagic of Queen Sugar

If you are not watching the television show Queen Sugar, you should be. A creation of the phenomenal Ava DuVernay, one of my favorite Black Female Filmmakers, the show’s Afrocentric focus and gripping storylines is just what many of us needed.

The first season of Queen Sugar introduces one of the main characters Nova Bordelon, played brilliantly by Rutina Wesley, as a spiritual and psychic practitioner. Located in the 9th ward of New Orleans, she performs traditional blessings and cleansings for the community. I find it interesting that this character is also the one who is primarily community minded, working as a journalist and a social justice champion. A piece at colorlines.com describes her : ” Rutina Wesley, the “True Blood” alumn plays the oldest sibling, Nova Borderlon. The character, which DuVernay created, is an investigative journalist, activist, healer and a dealer of a certain plant.”

Many of the viewers responded positively to the Rutina “the rootworker” character, and were hoping that the second season would bring more magic. Season 2 Episode 5 she performs a house blessing for her sister using sage, candles, prayer, and calm to “lift up” the space.  Unfortunately, not much time is given to the practices, and even less dialogue is given to what’s happening. I’m not sure if this is meant to be read as magick is just a part of everyday life, or positing magick as not worthy of explanation. I guess ultimately it’s just a good thing that some kind of practices can now be seen.

The Magick In The Music Of Queen Sugar

For many of us the magick is in the music. The show uses this to it’s advantage It was such a beautiful surprise to hear Ibeyi’s River in Series 2 Episode 9.

The lyrics call to the Orisha Oshun ( also known as Ochun, Ọṣun, and Oxum.)

We all sincerely hope Queen Sugar continues for many seasons to come. I for one want to know more about the magick. Not to mention I was born to eat biscuits and gravy all day at the High Yellow diner featured in the series. But all kidding aside, if Ms. DuVernay ever needs a #BlackGirlMagic consultant I’m right here. I graduated from NYU film school, and have over 25 experience as a Voodoo practitioner and psychic reader. 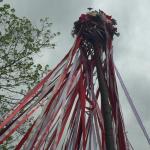 April 30, 2018
First Of May Outdoor You Know What Spell
Next Post

May 8, 2018 Insights Of A Priestess In Publishing
Recent Comments
0 | Leave a Comment
"I too find it ironic. Her character even had a racial slur spewed at her, ..."
Amanda Ingalls Rachel True Speaks Out Against The ..."
"I love Miss Cleo! Thank you for bringing her forward again."
Brandy Williams Author The Lost Interviews Of Miss Cleo
"Wow I'm going to try it"
LaTonya Bowden Herbal Magick : Grab Some Five ..."
"If I said "Merry Witchmas", I'm pretty sure my sister would have a cow. As ..."
Amanda Ingalls Top 5 Witchmas Cookies To Make ..."
Browse Our Archives
Related posts from Voodoo Universe