Thoughts That Console Me on Maundy Thursday

Thoughts That Console Me on Maundy Thursday April 13, 2017 Wendy Murray

The Thursday before Easter Sunday is called Maundy Thursday in some traditions. I have attended many of these services and the feeling of desertion and despair, such as our Lord himself experienced that last night of his life, is always palpable. Entering a dimly-lit sanctuary you would see glowing candles adorning the altar, while all crosses on the altar are shrouded in red linens. As the service would commence the priest might pray, “Mercifully grant that we may receive the sacrament thankfully, in remembrance of Jesus Christ our Lord who in these holy mysteries gives us a pledge.” The priest speaks of the sacrament because “Maundy” means “command,” (originating from the Latin mandautam), referring to the command Jesus left that last night, embodied in the words,  “Take. Eat. Do this in my remembrance.”

Sitting in the darkened sanctuary amid shrouded crosses and slow burning candles, it is inevitable that you feel a sense of Jesus’ death closing in. I know I do. In the last hours of his freedom — and the last night of his earthly life — after sharing the supper with his closest friends, they went together to a garden, called Gethsemane, where Jesus asked them to stay with him and pray. But they fell asleep. So he went out and prayed alone, nose to the ground, tortured and weeping, snorting like a mule. I always try to picture the scene: his hands like ropes, thick and rough, powerful enough to snap my arm. But I also would know that this man and those hands did not snap the arms of women. He had touched women and allowed women to touch him.

On Maundy Thursday sitting in a darkened sanctuary, I confront the hidden places of my own human struggle — perhaps I could call it, my own Gethsemane — I picture Jesus leading me forward in small steps (as I am slow to do so on my own).  I hear him say, ‘Be careful. Watch there.’ He would point to a patch of ground where the earth collapsed in on itself. I would lose my breath and need to stop. He would turn and say, ‘I’ll carry you.’ He would throw his cloak over a shoulder, rough hands under my arms and legs. He’d hoist me and I’d lose my face in his cloak and smell the sweat and oil from the olive groves. I would wonder how many others he had carried this way and where he would get the strength. I would wonder if those he had carried had loved him as I loved him even as he carried me. I’d kiss that face, sweat pouring out of him. I’d wipe it clean and speak comfort to him so he, too, might know the shalom of human consolation.

As he prayed alone, it was the only time in his life that he had hedged. He asked his Father if there might not be another way. He knew there wasn’t, but he had to ask. He loosened the knot that tied him up inside–only a groan could free it– then he would rise to meet his fate.

10 Surprising Truths about Jesus (You...
Wake Up Call 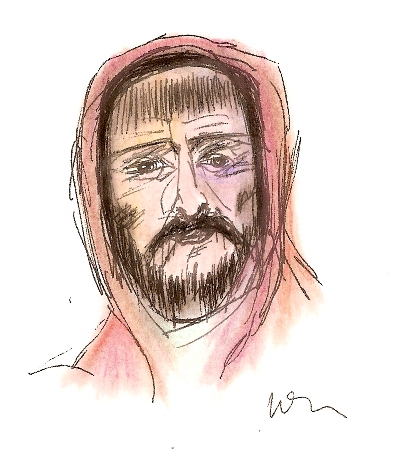 New Visions
How Do You Finish a Life with Wounds?...
Poets & Lunatics
TRENDING AT PATHEOS New Visions