Brahma: Everything You Need to Know

Brahma: Everything You Need to Know July 15, 2014 Ambaa Choate

This can get a bit confusing, but Brahman is the word for the concept of the universal God from which all others come, while Brahma is one of the trinity. Brahma, along with Shiva and Vishnu, are manifestations of Brahman.

In doing research, it can be difficult to sort out whether people are speaking of Brahma or Brahman and which is to be worshiped. We’ll be speaking today about Brahma. Later there will be a post for Brahman as well.

Brahma may be busy, but his consort Saraswati is available. She can guide you in creative pursuits. She is also said to refine your character and help further your education when worshiped. Very few people worship Brahma directly. He creates new life and he writes people’s destinies.

One reason why he isn’t worshiped as much may be that his “role as the creator is over. It is left to Vishnu to preserve the world and Shiva to continue its path of cosmic reincarnation.” –http://www.bbc.co.uk/religion/religions/hinduism/deities/brahma.shtml

There are several stories on this theme. Here are a few of them:

Brahma and Vishnu were touring the Universe one day and found a pillar of light which extended farther than they could perceive in two directions. They were curious and decided to split up to see if one of them could find an end. Vishnu went in one direction and Brahma the other, After some time, they returned to their staring place. Vishnu said that he was unable to find the beginning, no matter how far he traveled. Brahma said that he found a beginning. He let his ego get the best of him and lied. Thereupon, the Pillar of light immediately changed into a form of Shiva who called Brahma a liar and sentenced him to be little observed in the divine ceremonies. This is why you will not find many pujas to him.

Brahma created a woman in order to aid him with his job of creation. She was called Shatarupa.

She was so beautiful that Brahma became infatuated with her, and gazed at her wherever she went. This caused her extreme embarrassment and Shatarupa tried to turn from his gaze.

But in every direction she moved, Brahma sprouted a head until he had developed four. Finally, Shatarupa grew so frustrated that she jumped to try to avoid his gaze. Brahma, in his obsession, sprouted a fifth head on top of all.

It is also said in some sources that Shatarupa kept changing her form. She became every creature on earth to avoid Brahma. He however, changed his form to the male version of whatever she was and thus every animal community in the world was created.

Lord Shiva admonished Brahma for demonstrating behaviour of an incestuous nature (since Brahma had created Shatarupa) and chopped off his fifth head for ‘unholy’ behavior. Since Brahma had distracted his mind from the soul and towards the cravings of the flesh, Shiva’s curse was that people should not worship Brahma.

As a form of repentance, it is said that Brahma has been continually reciting the four Vedas since this time, one from each of his four heads.

According to another legend, Brahma is not worshiped because of a curse by the great sage Brahmarishi Bhrigu. Once a great fire-sacrifice (yajna) was being organised on Earth with Bhrigu being the high priest. It was decided that the greatest among all Gods would be made the presiding deity. Bhrigu then set off to find the greatest among the Trimurti. When he went to Brahma, he was so immersed in the music played by Saraswati that he could hardly hear Bhrigu’s calls. The enraged Bhrigu then cursed Brahma that no person on Earth would ever invoke him or worship him again.

Brahma’s vehicle is a swan

Time is measured in days of Brahma and this can get quite complicated and confusing!

Reckoning of time for Brahma

One day of Brahma is divided into 10,000 parts called caraṇas. The caraṇas are divided as follows:

The cycle repeats itself, so altogether there are 1,000 cycles of Mahā-Yuga in one day of Brahma.

Currently, 50 years of Brahma have elapsed and this is the first ‘day’ of the 51st year. This Brahma’s day, Kalpa, is named as ShvetaVaraha Kalpa. Within this Day, six Manvantaras have already elapsed and this is the seventh Manavatara, named as – Vaivasvatha Manvantara (or Sraddhadeva Manavatara). Within the Vaivasvatha Manavantara, 27 Mahayugas (4 Yugas together is a Mahayuga), and the Krita, Treta and Dwapara Yugas of the 28th Mahayuga have elapsed. This Kaliyuga is in the 28th Mahayuga. This Kaliyuga began in the year 3102 BC in the proleptic Julian Calendar. Since 50 years of Brahma have already elapsed, this is the second Parardha, also called as Dvithiya Parardha.

So the total time elapsed since current Brahma is

The current Kali Yuga began at midnight 17 February / 18 February in 3102 BC in the proleptic Julian calendar. As per the information above about Yuga periods, only 5,115 years are passed out of 432,000 years of current Kali Yuga, and hence another 426,985 years are left to complete this 28th Kali Yuga of Vaivaswatha Manvantara.

(Read more at Wikipedia Hindu Units of Measurement and http://www.mcremo.com/vedic.htm)

The Bhagwatam says, “Brahma’s one day equals to 1,000 cycles of the four yugas (one cycle of four yugas is 4.32 million years). It is called one kalp. There are fourteen Manus in one kalp. For the same length of time there is the night of Brahma. This is called pralaya or kalp pralaya. At that time the earth planet and the sun along with three celestial abodes (bhu, bhuv and swah) enter into the transition period (and become uninhabited). During that period Brahma holds within himself all the beings of the material and the celestial worlds in a suspended state and sleeps. (The next day he again produces them and re-forms them as they were before.) In this way Brahma lives for two parardh(twice of 50 years). After that, there is a complete dissolution of the brahmand (the planetary system and its celestial abodes). This is called prakrit pralaya of the brahmand.” (Bhag. 12/4/2 to 6) –http://www.encyclopediaofauthentichinduism.org/articles/48_the_exact_calculations.htm

There is a Brahma temple at Pushkar and they honor Brahma once a year during the festival of Kartik Poornima (in other parts of India this festival does not represent Brahma). At that time devotees path in Pushkar Lake.

For a list of locations of Brahma worship, see Wikipedia. 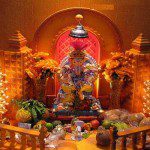 July 16, 2014 The Perfect Prayer
Recent Comments
7 Comments | Leave a Comment
Browse Our Archives
get the latest from
The White Hindu
Sign up for our newsletter
POPULAR AT PATHEOS Hindu
1 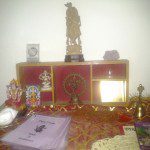 Hindu
Do The Gods Get Jealous of One Another?...
The White Hindu 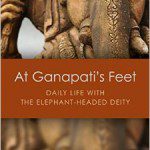