In the last few years I have been fortunate enough to be connected with many people who are exploring the ideas of racism and racial privilege. I had a lot of learning to do and it’s an ongoing process as I learn to set aside my own opinions to really listen to the opinions of those whose voices are not as easily heard as mine. (Here are some great essays and cartoons to get you started if this is a new concept for you too!)

Even when I’m not being racist myself and even though I’m not personally responsible for the ways that non-white people have been mistreated in America and around the world, I still benefit from racism that is ingrained so deeply in our society that we white people usually don’t even see it.

So once I learned about this concept of privilege, what was the next step?

I read a lot of articles complaining about privilege and just trying to get people to understand that racism is still alive in America. But once you realize that it is, what comes next? What can I as a person with privilege do about it? I don’t want the unfair advantages. I want to make things fair for everyone! But I can’t give back my privilege. It exists in me because it exists in society and I didn’t ask to be born with this advantage, but I was.

As I dug deeper I began to come across the concept that people who are benefiting from racial (and other) privileges can use that advantage to boost the voices of others, to effect change because we are more likely to be heard.

It occurred to me that this is what Tulsi Gabbard has the opportunity to do as the first Hindu in U.S. Congress. On one hand it frustrates me that this honor is going to a white Hindu and not someone of Indian ethnicity.

Gabbard’s status has helped the Hindu presence on the national political stage. But it also illustrates a sensitive split in who can and cannot run for Congress: Successful candidates tend to be Christians, with names and personas that are more palatable to other Americans…“If there is a case where religion is a liability, then not being a Judeo-Christian would be it,” said Ramakrishnan. –http://www.theatlantic.com/politics/archive/2015/03/hindus-in-american-politics/386941/

On the other hand, this is exactly how white Hindus can make things better for Hindus of Indian ethnicity. She was able to get into the position she’s in partly because she looked more familiar to non-Indian voters and her name was not too foreign to them. Now that she’s there, she can use the fact that non-Indian Americans feel comfortable with her look to start raising the profile of Hinduism in America.

The opportunity that I have found in my life to try to use my white privilege for good is in wearing the bindi.

At first this doesn’t sound like a help at all. What’s one more white person wearing a bindi? They’re all doing it because it looks cool. I think there is a difference in how I do it and I think (and hope) that it can help non-white Hindus reclaim their cultural heritage. Allow me to explain…

When I wear a bindi I believe that it is very clear that it isn’t a fashion statement or a “cool trend.” I actually wish that wearing fancy bindis didn’t seem to be an implicit consent for anyone to wear them at any time for any reason. But it does happen that way. So even though I like putting together cool outfits on Polyvore with bindis that match, in actual life I wear a small plain red circle bindi.

I think that the plain bindi worn with everyday clothes makes it clear that this is a symbol of significance and not just for looking pretty.

I was very moved by an article that friends shared with me recently where a young woman explains how white people will often say “How come you can wear it and I can’t?” and yet it ends up being that the white people can wear it and the people of Indian ethnicity can’t because it’s something they got/get made fun of for. Sometimes the same people who ridiculed their cultural traditions in middle school are now wearing bindis to concerts.

Kids ran away from me at school like I was poison ivy. Convinced that I would give them a horrible disease, or if I didn’t, I probably smelled anyway so there was no reason to go within a thirty foot proximity of me. Their parents would encourage them – instating bans on ever ending up at my house when they saw my mother pick me up in the playground with a bindi on her forehead one day, when they heard my father’s strong accent. Like they’d have wanted to go to my house anyway.

Funnily, I can’t wear it. I can’t wear the sari, the lengha or the bindi, even now, without someone looking me up and down with disgust. ‘Get out of our country’; ‘dothead’; ‘Paki’; ‘lousy immigrants, running our healthcare systems to lock us out’. –http://ishanijasmin.com/post/107829263023/the-commodification-of-culture-is-you-can-wear

Pass The Roti has a blog post on a very similar theme.

Everyone at the concert was white; all the girls were wearing bindis. But they were looking at me in the most depreciating manner; I even heard a couple of comments about my skin color (I used to be very tan because I was a swimmer and water polo player) and that I “should go back.”

Apparently, it’s ok for white girls to wear bindis, but not Indians themselves, even though bindis come from India and bindis are an object created by Indians.

I think the best way to reconnect the bindi with the religious meaning it has is for Hindus to wear it. To wear it proudly and defiantly. Yet I know that for many American Hindus of Indian ethnicity, this just invites more racism into their lives. If they wear bindis, they are assumed to be foreign. Worse, people wearing bindi and/or traditional dress are sometimes assumed to be “simple” and uneducated.

My hope is that my wearing it as a religious symbol can be a bridge for other white people to learn about Hinduism and India. Wrong as it is, I have found that many white Americans feel more comfortable asking me questions about it than asking people of Indian ethnicity. That may be a fear of offending someone or a fear of unknown people. I’m like them and so they don’t feel weird asking me why I wear it and what it means.  I expect Hinduism to seem less and less alien to white non-Hindu Americans as they get to know me and see that I’m just a regular person like them. And once they see that I’m Hindu and also someone they can relate to, then they’ll start seeing the other Hindus in their lives with more empathy.

What do you guys think? Am I being delusional? 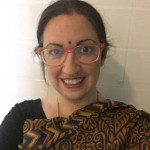 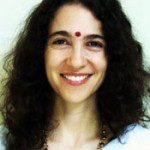 March 13, 2015 Another White Hindu Story
Recent Comments
72 Comments | Leave a Comment
Browse Our Archives
get the latest from
The White Hindu
Sign up for our newsletter
POPULAR AT PATHEOS Hindu
1