In-Between Not Alive and Alive (the abortion debate)

I am a feminist, a liberal, and pro-choice…and I also think that abortion is morally wrong.

A fetus is not alive but it’s also not not-alive. It is likely to become alive (although miscarriage is much more common than most people realize). I value this in-between state very highly. If all goes well that not-alive fetus will become a living human and that is a wonderful miracle.

Pro-choice means exactly what it sounds like: choices. People seem to have the misconception that we pro-choicers are pro-abortion, that we want people to have abortions, that we want to force people to have abortions perhaps. And that is ridiculous. It is a sad option to have to exercise but there are reasons why the option should be there. Pro-choicers want people to know all of their options and make the best decision for themselves and their situation. The decision of what to do in the case of an unplanned pregnancy is between a woman, her partner, her doctor, and her God.

You might say that if people want to have sex, they have to deal with the consequences of that decision. I do feel that way to some extent, but what I’m discovering is that the state of sex education here is so poor that young people actually don’t understand the potential consequences of what they are doing.

Making abortion difficult to get does not make them less prevalent. (Similar to the argument against gun control: people who want/need to get them will, whether it’s illegal or not.) There is, however, an excellent way to reduce abortions and that is comprehensive sex education. Just look at the spokesperson for abstinence-only sex education: Bristol Palin. She has two children out of wedlock so clearly it does not work if the spokesperson herself is unable to do it.

Sure we can hope that our young people will remain chaste. But they also need to understand their bodies and know what’s happening when their hormones are starting to get difficult to control. I was an abstinent young person but I can see that that standard is close to impossible for a lot of people in America. At home, tell your children what you want. At school, in sex education classes, they need facts and not morality. That is not encouraging them to have sex, but it is preparing them to know the potential consequences of it if they do.

It is strange to see that so many people who are “pro-life” are also pro slashing social programs and affordable health care. It seems as though no care or thought is given to what happens to these children after they are born. That is not always the case and I respect pro-lifers who “put their money where their mouth is” and actually help women who are in desperate situations. If you’re going to insist that all pregnancies be carried to birth, you’ve got to have help available to those mothers who do not have the resources to raise those children.

I spoke to one woman whose fetus was very ill but she carried him anyway, hoping the doctors were wrong. He was born very premature with a lot of health problems. Luckily the ACA existed and the baby was able to get health coverage. Without the pre-existing conditions provision, he would not have been covered and the 14 days he lived would have bankrupted his mother and probably her whole family.

There’s a lot of misunderstanding about late-term abortion. I am confident in saying that zero late-term abortions happen because a woman feels inconvenienced by a pregnancy. No one carries a fetus for six months and then decides “never mind, this isn’t for me.” Pregnancy is tough! Those people who are getting late-term abortions are living their worst nightmare. They are people who desperately want their child but something has gone wrong and they are in a situation where continuing the pregnancy is likely to result in their death.

Women having late term abortions are living in their worst nightmare, losing a child they want. Is there any worse pain in this world than losing a child?

The Sanctity of Life bill is incredibly dangerous. The wording makes women responsible for miscarriage. A woman having a miscarriage could be convicted of murder. A fertilized egg is not a living human. It could become one. But if, say, it is ectopic it cannot (when the fertilized egg attaches to the fallopian tube instead of the uterus. This situation is extremely dangerous for the mother and there is no way to save the egg). Many women experience miscarriages and even more have miscarriages without ever knowing they were pregnant. A miscarriage can happen before the missed period that clues most women in that they are pregnant.

As this author points out, those who don’t use birth control are the ones letting the most fertilized eggs die: Who aborts the most fetuses? Families like the Duggars

In my ideal world, there wouldn’t be abortions. But the world is not perfect. There are times when they are absolutely necessary to save a mother’s life (and I do prioritize already living humans over potential future humans). And women who find themselves unexpectedly pregnant have to figure out for themselves what they are going to do to deal with that. They should be offered counseling that includes comprehensive information on choices, including what kinds of social services are available to help her if she wants to continue the pregnancy. There should be no bias either way in that counseling.

Women are human beings. If you are pro-life, you need to be pro-women.

[For more on the Hindu perspective of abortion, see this post: Hinduism And Abortion] 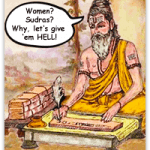