Shopkeeper Sagas: The Crownless Again Shall be King

Shopkeeper Sagas: The Crownless Again Shall be King May 12, 2020 Heron Michelle

Over the last four years, I’ve shared this series of Shopkeeper’s Sagas. These tell my witching tale, from crownless to sovereign. The last few months since the Covid-19 shutdown, I’ve fought to save my retail business, so we can continue to do the good work of being a safe port in the storm. Some would say that our work is “non-essential.” On one hand I agree, so we closed our doors as directed. But on the other hand, I think public witchcraft institutions remain vital. I’d hate to see our witchcraft shops, like lighthouses, be forced to shutter their lights. So, I return at last to conclude the saga of why I took on the work of public witchcraft full-time.

This saga has been working through the lines in the The Riddle of Strider that was found in JRR Tolkein’s Lord of the Rings. To catch up with the previous installments, start with these links:

The Crownless Again Shall be King (or Queen, as the case may be.)

Way back in 2005 or so, I worked full-time in my home raising my two small children. I enjoyed this often-difficult domestic work, and as a well-educated feminist, I considered my work to be a valuable service to society, given of my own free-will; I was subservient to no one. Sadly, when given this modicum of societal one-upsmanship as the sole-provider, my former husband turned to the dark side and attempted to control my free-will via control of the household money.

It was during these last years of my doomed marriage, that he went ballistic when he found out I wanted to take a medicinal herbalism class from a woman whose website advertised that she also read tarot cards. He forbade me from going to the class. He ranted on about what “an idiot, what a charlatan,” she must be.  He wouldn’t allow me to pay his money to a person like that.  “HIS WIFE,” he berated, “would not be associated with those kind of people.”

He spat that last part out with such vitriol. It hit me with the force of a thousand heartbreaks, that *I* was those kind of people…those kind of people who CAN’T BE HIS WIFE. It was at that moment I realized that I could no longer play both sides: be my authentic self, and coddle a petrified tyrant. In that moment, I knew that if he ever glimpsed my authentic self, that we’d be finished. That right there is what “conditional love” sounds like, and it is a deeply cutting wound from which I’ve still not fully healed. Our marriage didn’t last much longer.

Between the fear of ripping my young family apart, and the fatwa of salvation my evangelical mother would no doubt wage against me, I stayed closeted about all these witchy knowings and growings for a very miserable, very long time. It was a slow death by spiritual starvation.

At Imbolc of 2007, I dedicated my first post-initation year’s Great Work to working with elemental Fire. By March my mama died, which I wrote about in the Death Toll series. With her ancestral guidance, and a trail of tears that I still can’t write about, my marriage died, too. It took burying both before I could know the freedom of sovereignty as my true self. By June, our coven blew up, so I couldn’t hide in group-membership, either. Between my Saturn Return at 29, and my Mother’s death when I was 33, I’d finally found the needed maturity to take the helm of my life, and steer into the flow of my my destiny, my wyrd, no excuses.

By November of that year of fire, I’d decided to go back to work, and change careers. I’d release my former profession of Commercial Interior Design, and open a witchcraft shop. I’d name her The Sojourner Whole Earth Provisions. I chose that name based on a favorite poem by Robert Frost: “I took the path less traveled by, and it’s made all the difference.” I wanted to make a difference as I journeyed along my lesser-traveled path. I chose Sojourner, because I see that all spirit is an eternal journey, and when we incarnate here on earth, our spirits are taking a physical sojourn. We take a resting, extended vacation here in the oasis that is this earth, in these particular bodies, before eventually moving on. We are Sojourners in a life we choose, and that life should be thoroughly enjoyed.

Mostly, I wanted to devote my time to becoming a Witch and Priestess of the God/dess, and teaching others about this path of personal sovereignty. I wanted to live authentically, and shift societal perception such that other people still biding time in their broom closets could feel safe enough to eventually venture out, as they choose.

It took phenomenal acts of magick, luck, time and physical labor, given by hoards of devoted friends and family, but by March of 2009, we finally opened the doors of the The Sojourner. That was a few weeks after my 35th birthday, and the second anniversary of my mother’s death. We’ve now been open 11 years. Our public classroom made it possible to host countless authors and teachers to come and share their wisdom.

Becoming Those Kind of People

In due course, I also became a tarot card reader, a Reiki energy healer, and an adviser to other witches facing similar life challenges that I’d once faced. Countless times I’ve delivered the message to divorce an abusive spouse. Countless times the cards ask them to release all expectation of acceptance from their closed-minded, Christian parents, and just be themselves anyway.

To embrace witchcraft is to become the adult in all your relationships, even as your parents throw juvenile temper tantrums. We must stand in our truth, and face down the Balrogs of this bullshit society. Like Gandalf, we bridge the liminal and shout down any terrifying beast, “You shall not pass!”

To take accept the adventure of this Sojourn, is to trust in the process of becoming; to accept a few risks that muggles won’t understand, and leave the comfort of one’s door. We venture there and back again and again and again as we tread a pentacle path of self-discovery. (So many Lord of the Ring’s references.)

For my own witching purpose, my guides insist that I be open, public and honest about what lights my spiritual fires. My guides asked that I create a safe haven and pagan temple for others, in full view of the public. So, with my ancestral inheritance, I opened The Sojourner. That is my sacred purpose, but that level of public scrutiny doesn’t necessarily have to be yours. I am honest about all that I’ve had to lose in order correct my course, and embrace my life, in hopes that it helps others to see a woman living safely and happily after those losses. I’m often told that I’m “strong” for having chosen this witching life. Strong was just the by-product of being stubborn.

Regardless of what sacred purpose we are here to accomplish, a witch is inevitably tasked to do whatever it takes to claim their personal sovereignty and begin acting from divine fires of their free-will, scrutiny be damned. We show up for ourselves, and keep hammering away at whatever forge we are called to work.

This series started with The Riddle of Strider, this poem of Tolkien’s from Lord of the Rings. I’ve referenced each line in the titles of this Shopkeeper saga, slowly revealed over these last four years. This poetry feels very personal to me. These lines, and this article series, tell my story, but I think this riddle tells most witches’ story.

Magickally-minded people see value in far more than mere material riches; the abundance we find glitters in the simple joys of a life well-lived. We know that if we are guided by our own moral compass, following our own meandering path, we will never really be lost.

We know deep in our bones, and dig up from oldest roots of this earth, an inalienable truth of our divinity that is well worth excavating for the modern world. No frosty dark-ages of ignorance and enslavement can kill this living power.

No matter what bullshit is burned away from our lives, the witchflame will burn all the more brightly. No matter how hopeless the darkness may seem in this cycle, we bridge the liminal and celebrate the returning balance.

The fires of Spirit hone the blade of our Will so sharp, so strong, that fears imposed by the patriarchy can no longer threaten us. The wise witch inevitably realizes that their crown was right there, all along. So with witchcraft practices, we give it a good polish, and take the job; we decide to re-crown ourselves and get down to business of creation.

Heavy is the head that wears the starry, thorny, floral crown of the witch. But so far, I find it’s well worth the effort. Support your witching shopkeepers however you can during these dark times. So that all our sagas may continue into a victorious new age… 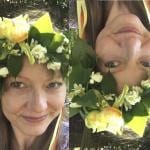 May 4, 2020
Beltane Mirror: Between Hole and Whole is a Double YOU
Next Post 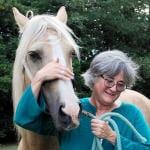 May 18, 2020 Shedding Your Cares with Horsehair at the Dark Moon
Recent Comments
0 | Leave a Comment
"One day back we found one of those little cartoon books at my husband's Catholic ..."
Carmìne Dalle Christian Child Reads the Bible, Chooses ..."
"Really useful article. Thanks!"
JenniWest Witch’s 2021 Astrological Ritual Calendar
"I love your message of peace. Keep sharing. I am so tired of certain religious ..."
Cindi Evans Christian Child Reads the Bible, Chooses ..."
"LOVE SPELL TO BRING BACK EX LOVER AND RESTORE BROKEN RELATIONSHIPS Hello everyone i want ..."
Barbra Mavis WitchCrafting your own Love Spell
Browse Our Archives
get the latest from
Witch on Fire
Sign up for our newsletter
POPULAR AT PATHEOS Pagan
1