I Sent My Daughter to Spain. . .and She Survived

I Sent My Daughter to Spain. . .and She Survived September 18, 2013 Kathy Tuan-Maclean

Back in late June, I went through a mild freak out over sending Ling to a foreign country with free-flowing alcohol, sultry weather, and college-aged BOYS in her dorm with Spanish MEN outside it (read If You’re Sending Your Kid to Spain, Don’t Do it My Way).

Scott and I gave a whole slew of lectures about:

“Who do you think I am?” she complained.  “You really think I’m going to go out and become a completely different person than I am at home?”

I shrugged.  “You’re on your own for the first time.  You get to remake yourself into whoever you want to be.  Just be smart about it.”

I should have had more faith.  In her.  In God.  But mostly in her.

Before she left, Ling announced that we shouldn’t expect to hear from her more than once a week.  “OK,” I said.

But then on our first phone call I mentioned, “You know, when you’re in a foreign country for the first time I don’t think we should only talk once a week.”

“Yeah, I was thinking that,” she said.  “I realized I’m going to want to talk more often.”

So we talked or Skyped almost daily—with me blowing her off more than the other way around.  (She called at 11 p.m. her time, 5 p.m. our time—hard to always be available then!).

After a miserable first day where shyness overcame her and she didn’t talk to anyone except one boy who talked to her first, she found 2 girls in addition to that boy—the 3 kids who weren’t committed to partying every night, but instead wanted to see as much of Madrid as they could.

So Ling took classes in the morning, ate lunch at 2, travelled around Madrid all afternoon, studied at night, ate dinner at 9, and (tried to) Skyped me at 11.  Not a bad way to spend a month.

“Doesn’t it feel good to know you can go to a foreign country and figure out how to survive?” I asked her when she returned. 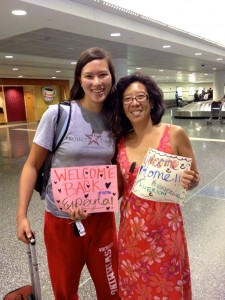 September 9, 2013
Doing NYC with My 13 Year Old: Getting the Biggest Bang for the Buck
Next Post

September 25, 2013 Senior Panic
Recent Comments
0 | Leave a Comment
"But the problem is people bash formula feeding saying thats not what babies are suppsed ..."
Carls Why Not Just Breastfeed in Private?
"I couldnt care.less how someone.feeds their kid...But you do know that breast are sexual right? ..."
Carls Why Not Just Breastfeed in Private?
"Oh my gosh, this had me cracking up. I love the part about Ren breaking ..."
Tara Edelschick Why I Never Wanted Pets but ..."
"I'm glad to find this! Mine all discovered RR this year and read obsessively (me ..."
SSH Rick Riordan I Love You
Browse Our Archives
get the latest from
Family
Sign up for our newsletter
POPULAR AT PATHEOS Family
1