A Scrambled Egg–Not All Yellow, Not All White, Mixed

Several months ago I blogged on What Cheerios and Kids Can Teach Us About Race, looking at some of the attitudes about biracial families.  Right after,  I wanted to post Ling’s college essay about being biracial (with her permission of course) to present an inside view of what it’s felt like.  But we worried it might mess with the college application process.  So I’m posting it now that all that’s been decided!

In high school, I’ve embraced almost every Asian stereotype there is. My Asian friends and I study during lunch, don’t go out on weekends, and don’t date. I work hard in school, and I love it. I Google people like Bill Clinton and Queen Victoria to learn more about them outside of class. I find everything from the origins of the novel to the derivative of f(x) fascinating. I adore food–all-you-can-eat menus and buffets are a dream come true.

I’ve still got egg white among the yolk though. I often feel that while Asian culture is all about performance, white culture is about passion. Too much of one makes you unhappy; too much of the other leaves you homeless, so I’ve spent a lot of time trying to strike a balance between the two. I wanted to do more than study my way through high school. My friends do spring track to get out of gym so that they can take an extra AP. I swim because I love it. I took Mandarin not to impress colleges, but to learn the language of my Chinese heritage.

As an introvert, I like staying home on the weekends and reading. I don’t like the center of attention. Yet I organize all the big parties for my friends because no one else will, and even introverts like to socialize sometimes.

I’ve fought for balance in my family as well as in school. White is Gram’s famous lobster dinners,  her gingerbread men every Christmas, and always enough food but not too much. White is alcohol at every meal, sometimes even breakfast. White is Gram’s immaculate home. White is skiing in the winter, water-skiing in the summer, and running year-round.

In contrast, Chinese is an overabundance of food, while alcohol is an afterthought at best. Chinese is my Po-Po (maternal grandmother) with her dragon’s nest of a house, filled with items she’s hoarded away. Chinese is Chinese New Year, which we celebrate every year with lots of jiaozi (dumplings), nian gao (New Year sticky cake), and hong bao (red envelopes), plus the requisite kow-towing in order to earn said envelopes. Chinese is my mother’s shock and pride that my siblings and I could become varsity athletes (in high school, the only class she was allowed to get a non-A in was gym).

I’m a scrambled egg. Once upon a time, the egg yolk and white were separated by a membrane, and could only see each other through a window. Now they’re all jumbled together. Before is what it was like when my parents met. After is what happened to me. As a biracial person, I see both or all sides of a matter. Not pure yellow and certainly not White. Both of my cultures have good and bad aspects. I try to take the good and leave the bad, even if it doesn’t always work. And if being biracial has taught me one thing, it’s that balance is very important. 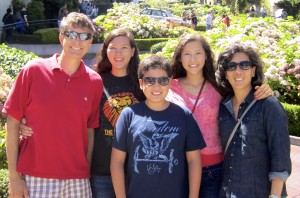 Family
What Cheerios and Kids Can Teach Us About...
Wordy Nerdy