After what’s felt like an arduous 2 year process, Ling has decided to attend Colby College in Maine.   She posted her decision on Facebook Saturday night (181 likes so far), the acceptance form’s in our mailbox right now and the decision’s made 3 whole days before the final deadline!

Can I say it’s been quite the ride?  After 20 some college visits (which apparently is a little out of control judged by the straw polls college admission officers have asked at admitted student days), an agonizing December spent overseeing Ling writing college essays, many booster talks, much prayer (not to mention the parental angst–have I prepared her enough, pushed her enough, shown grace enough, ad nauseum. all of which I wrote about here over a year ago and struggled with ever since), it’s finally decided and if all goes well we’ll drop her off in Waterville Maine 4 months from now.

Back in January, I wrote Top Tips for the College Application Process.  Here are a few more based on what we’ve learned:

1.  Grades and Scores seem to be the Main Predictors:  Ling’s high school has a program called Naviance that plots your child’s grades and scores against those of kids from the past 5 years for each college.  If you’re in the box, meaning your grades/scores are lower than the average of those who got in, it’s a long shot, if you’re on the line, it’s a maybe, and if you’re outside the box, you have a pretty good chance (or for the super elite schools, some chance).  My friend whose 2 daughters are in college now told me that Naviance completely predicted their acceptances and rejections.  Now that we’ve been through it, with an N of 1, it appears she’s right. 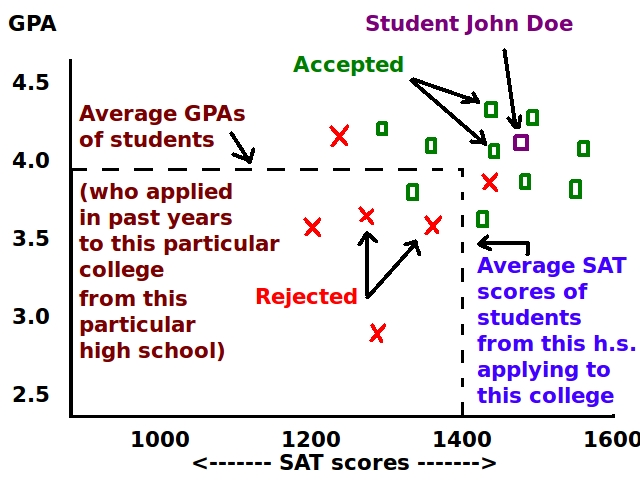 3.  Go for your reaches but be realistic:  Ling got rejected from 5 schools and accepted to 5 schools.  That made me think we did the process exactly right.  She felt really bad about the rejections.  But there’s a reason reach schools are called reaches.  Of the 4 schools that felt like “target” schools, she got into 3 of them—all of which she was “outside the box.”

4.  If you’re struggling with perspective, try, try again:  There are people starving in this world, there are children in war-torn countries who won’t get a basic education let alone a great one.  My kids live a privileged life.  God is good.  All the time.  Including if you got rejected from all your reaches.

We’ve ordered the Colby sweatshirt and water bottle, neither of which will arrive in time for senior night on Wednesday.  We’ll work on getting her ready for college.  We’ll pray in preparation for all the adventures ahead of her.

Meanwhile, I want to just rest—but then Kai, a sophomore, pointed out yesterday that it’s time to start the college search process with her.

March 10, 2014
Leaping into the Abyss of Absurdity (also known as Faith)
Next Post

April 30, 2014 A Scrambled Egg--Not All Yellow, Not All White, Mixed
Recent Comments
0 | Leave a Comment
Browse Our Archives
get the latest from
Family
Sign up for our newsletter
POPULAR AT PATHEOS Family
1