“The Kingdom of Heaven is like an investment that everyone wants to buy, but no one wants to hold.”

“The Kingdom of Heaven is like an investment that everyone wants to buy, but no one wants to hold.” May 1, 2014 Frank Weathers

Put your Bibles down, folks, because Jesus never said that. It’s just a thought that popped into my head while I was reviewing the results of the last five years of my retirement account. The seed of the thought was probably planted by my reading the gospels as I make my way through the Bible in a year.

The parables of Jesus were based in the real. They were based on the life experiences of the people he proclaimed the Good News to, saavy?

So if he had only shown up a year or two ago, one of his parables today might be like my title above. Because everyone knows about investments these days, and everyone has an opinion on them.

I’m reading Luke’s gospel now, and the Parable of the Talents recently streamed across my mind’s eye. Luke’s version is pretty cool, as he puts it in terms of coins. You know, 10 coins, 5 coins, 1 coin…you get the picture.

Let me give you another picture now. 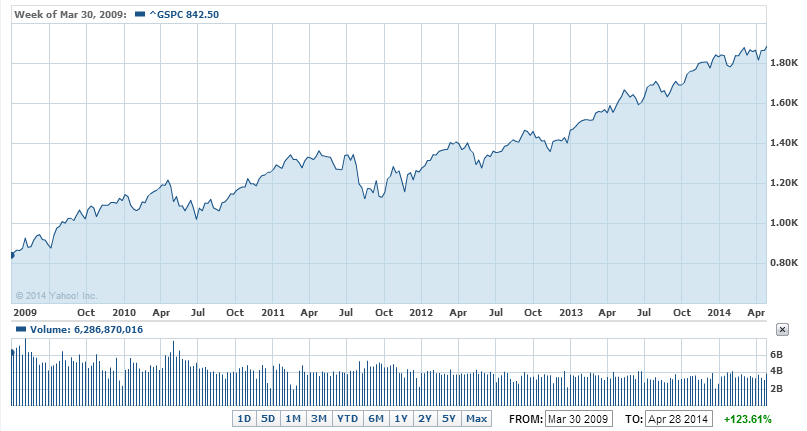 This chart reminds me of a musical!

Back to the post,  the stock market just set a new high mark. It has also done pretty well over the last five years, even if you only just realized that this year.

What? You didn’t know? You thought the government shutdown would put the kabosh on the market? Or the annual/quarterly “budget crisis?” Don’t worry, you aren’t alone. I actually hope you have been blissfully engaged in other pursuits rather than watching the ebb and flow of the markets. It may seem more exciting than watching paint dry, but it shouldn’t be.

Looking at the chart above, some folks say to themselves, “and where is the trickle down to my wallet?” Some folks bow in homage to their god (hello, Mammon), while others just say to themselves, “Meh. This never works for me.” Oh, and a whole ‘nother bunch of folks are all excited about investing these days, because “record highs!” Usually these same folks are scarce at “record lows,” though.

The temptation looking at the chart above is to think, “Wow. Must be nice! If only I knew back in April of 2009 where the market would be today, I would have blah, blah, blah, yada, yada, yada.”

Yes. And just like James Bond in Casino Royale, you would have placed all your winnings on black, won, got the girl, saved the Empire, etc., etc., and so on and so forth. Because with a chart like what you see above, winning is EASY, and work is for suckers.

Here’s the thing. Looking back over the past 5 years, see, out of 61 months between April of 2009 up till a few days ago, I endured 24 months worth of losses. That’s right. Climbing the mountain you see above, it was not a straight path to ebullience. Good thing they weren’t consecutive losses, huh? Good thing I can bear pain, yes?

The financial pages are abuzz with announcing record setting highs, and folks who have been sitting on the sidelines are getting itchy to get in the water. But nobody tells you that, in a bull market run up like the one depicted above, you will likely be down, and not up, 40% of the time on any given day.

“Well, that right there is the reason I don’t invest in the stock and bond markets, Frank. I hate to lose, so I only put my money in the most conservative, guaranteed not to lose, options in my plan.”

I’m not going to really bother to ask you how that has been working out for you these past five years, gentle reader. But given where interest rates have been, and still are, I’d guess your mountain looks more like a mole hill, if not a depression, given inflation.

Bottomline of this post? You have to be willing to lose, in order to win. It’s like the Hall of Fame baseball player with the .300+ lifetime batting average (who, alas, doesn’t make it on base 70% of the time). You won’t get there without taking the swings.

So as I was pondering the ebbs and flows of my retirement account balance these past five years, a little voice popped into my noggin and whispered,

“If anyone wishes to come after me, he must deny himself and take up his cross daily and follow me. For whoever wishes to save his life will lose it, but whoever loses his life for my sake will save it. What profit is there for one to gain the whole world yet lose or forfeit himself?

And so on the feast of his foster father, Jesus gave me the idea to share this little post with you. Maybe St. Joseph the Worker also taught Jesus about accounts receivables, and accounts payables. About business risk, and reward, too, right there amidst his instructions for him to measure twice, and cut once.

After all, He is the founder of the greatest investment program in the history of the world. Nobody saw that one coming (except the prophets).

Because Christ Is The King, Not Mammon.

Because I’m A Contrarian.

April 28, 2014
Watch "The Third Way: Homosexuality And The Catholic Church" UPDATED
Next Post

May 5, 2014 Pope Francis Wishes Patheos A Happy 5th Birthday!
Recent Comments
0 | Leave a Comment
"Vaya con Dios, Leonard; Rest in Peace."
AnonCollie Leonard Nimoy Explains The Origin Of ..."
"Thank you for sharing"
Andy To Break My Fast from Being ..."
"I've seen Matt Maher live four times...twice since this song was released. I absolutely love ..."
Veritas81 WYD Flashback With Matt Maher, And ..."
"Yes, and Dolan should have corrected the scandalous and wrong decison of his predecessor when ..."
sixbunnies Archdiocese of New York Health Plan ..."
Browse Our Archives
get the latest from
Catholic
Sign up for our newsletter
POPULAR AT PATHEOS Catholic
1