This is my story – Part Eight: My Career

This is my story – Part Eight: My Career September 2, 2014 Adrian Warnock

As I speak about the story of my life, it has seemed easier to me when speaking about some of the most recent years to focus on different areas of life. I seem to wear a lot of different hats. One thing that has always amused me is that several people over the years have assumed that I must be full time working on my blog. But a man has to actually earn a living, as blogging certainly doesn’t pay the bills.

We all have a vocation. We have a role, we have a job to do. The pinnacle of Christian maturity is not necessarily being employed by a Church or Christian ministry. It doesn’t really matter whether you are a top businessman or whether you are a home-maker, you really work full time for Jesus.

There are lots of different kinds of jobs people do. It’s a funny old thing but one of the characteristics of my career has been that I’ve had a remarkable range of things that I’ve done. Some of these were very short-term summer jobs but nonetheless I’ve had a bit of a taster, let me give you a heads-up of what my career looks like.

My career began when I was still a child, actually I am not even sure I was technically old enough to work, there so I am not going to say how old I was. But I remember washing cars for the neighbors. It was like I had my own little business. I remember that I got these little leaflets done, and invested in a washing-up bucket and what I needed. And that raised the money I needed to buy my first computer. It’s a measure of how old I am that that first computer was called an ‘Oric 1’ Not the ZX81, which was far inferior, not the Sinclair Spectrum, which was the PC of its time. I like to think I had the Apple of its time – the Oric 1.

There are lots of different kinds of jobs. That was my first job and then of course, like many people in my day, I did a newspaper round.

I quickly graduated to collecting money from people’s homes to pay for their newspaper delivery. I just want to point out – I was not a debt collector, okay? The service was that I would go around and collect their money to save them having to go into the newsagents. I wasn’t chasing up bad debtors, just providing a helpful service.

I also remember washing dishes in a restaurant. I worked in factories as well. I worked in a plastic manufacturing company where we poured molten plastic into certain moulds and made stuff. I think I only did that for about a week or so. One of the things that put me off was when my machine stopped working, and I asked for help from one of the supervisors. Unfortunately molten plastic poured all over his hands as he was trying to fix the thing. I learned a bit about health and safety at work. Perhaps that led to some of my later direction, I’m not sure. But I got out of that job pretty quickly! 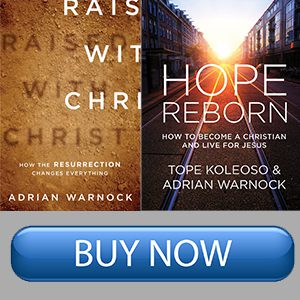 Then I remember actually working for what I call a “banana factory.” My job was this: I had to open boxes, take the bananas out of the boxes, put them on a conveyor belt, and somebody else would put them in another box. And I remember thinking at the time, “What was this about?” But it was only as I reflected on this that I realized the reason why the new boy was put on the ‘taking the bananas out of the boxes’ job. I was front-line for the tarantulas, I’m sure of it now! They never told me to look out for them. I suppose they thought I’d notice them pretty quick! And I don’t know what would have happened if one would have been there and bitten me. It was my job to stop you from being confronted by a spider when you bought your bananas. It was a very important role!

Then there was the chicken factory and I think I left that after a chicken fell on my head. It was dead, I should say. I wasn’t so good in that factory either. But in all these different jobs that I was doing while I was still at school, there were lessons that you learn that you then apply to other work.

I think that we sometimes get so caught up in our own career that we think we can only learn from people in the same line of work. One of the remarkable things was meeting some people there who said things like, “Oh I’ve worked here for 15 years.” It seemed like a long time, but they often said, “I love this job, it’s great.” It was quite interesting to see, because I to be honest, I haven’t always seen that level of contentment in some of my later colleagues.

I also worked as a cleaner in a hospital. I really wasn’t very good at that job. It took me hours to vacuum one corridor – and I didn’t do it very well! So I think I lasted in that one about two days.

I was a bit better at being a hospital kitchen porter. So my job was to move things – lots of baby food– from the hospital kitchen to the wards. Then I graduated to being a kitchen chef. So I actually cooked the vegetables for the hospital. I was actually quite good at that! I discovered that the real secret was to actually under-cook the vegetables because when they were slightly undercooked, they would still cook in the trolley and hopefully by the time people ate them, they weren’t completely mushy.

Then I became an auxiliary nurse. I did that for a little while. Again this was during holiday times. My career plan was to actually become a doctor and having worked as a nurse first helped me understand their role.

When I first arrived at medical school I was quite nervous, convinced that someone had mixed up my exam results. But by God’s grace I got through, and became a doctor in 1995, the same year I married Andrée.

In my early roles as as a junior doctor. I would treat people as they came in with heart attacks, or appendicitis, and work throughout the night. Sometimes I’d have to work from 9am on a Saturday morning and not finish until 6pm on a Monday evening, and then had to come back to work on the Tuesday. What’s scary though is that when we go in a plane, we limit the number of hours an airline pilot can do because we think it’s important they’re awake when they’re flying the plane. I believe that these days junior doctor’s hours are more limited, fortunately.

I then specialised in psychiatry, taking another qualification. At times, I did a bit of work in schools assessing children who were possibly mentally unwell, as well as assessing prisoners who were going to be tried. So I understand a little bit about what that those environments involve.

My next step, by a set of so-called “co-incidences” was to work in the head office of a large pharmaceutical company, working very closely with sales and marketing, dealing with the media, the regulators and coping with all the office politics. I learnt a lot about crisis management, and understood how journalists approach controversial stories involving big companies.

Now I work from home helping to run big clinical trials into new medicines for psychiatry. I work from my home office, but travel the world a fair amount. Sometimes I don’t mention my trips on my blog here. I often pre-program blog posts to appear.

I told you all of that because it is a slightly odd career and yet it does kind of hold together. And maybe some of you feel as if you have reached a kind of block in your career. Perhaps God’s going to unlock a change in direction for you that you’ve never even considered.

Why Churches Go Woke: They Deny...
The Chorus In The Chaos
Books by This Author Books by Adrian Warnock