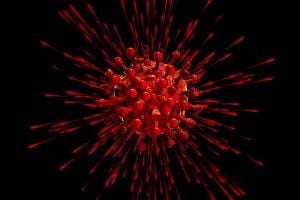 What would it look like if this happened elsewhere?

I am not trying to be alarmist here.  But here are some facts. If you look at the entire population of people who live in New York State one in every thousand has now died of Coronavirus.

To be clear this is out of the whole population not just of those who have caught coronavirus. And as of yesterday if you consider New York City only the number is even higher at 1.18 per thousand.

When you look at the older age group the death rate  is even higher still. In New York City almost nine of every thousand people aged over seventy five have now died directly from COVID19.

Unfortunately all of these figures are also likely to be an underestimate since earlier in the epidemic it was not possible to test everyone with a flu-like illness for Coronavirus even in hospital early in the epidemic.

And just like in many other countries there is also a dramatic increase in community deaths in New York at least some of which are surely due directly to undiagnosed Coronavirus. Four times as many New Yorkers are dying of any cause than would be expected at a normal week this time of yea.  We also don’t yet know how many of them are indirect deaths caused for example by people being too afraid to go to hospital if they had symptoms such as chest pain that would normally lead them to attend A and E. 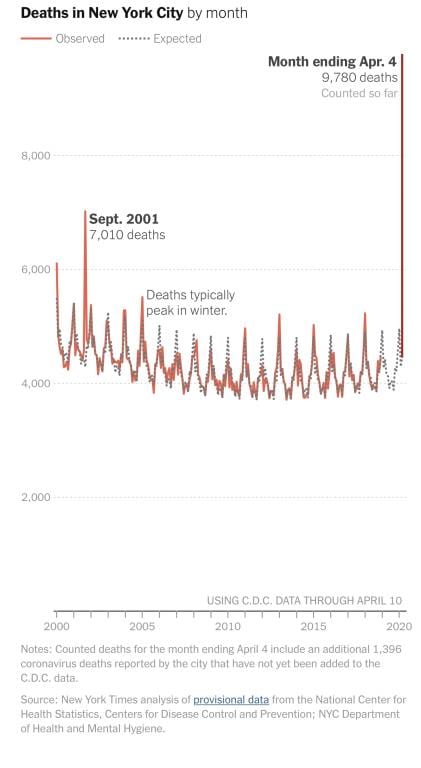 When we look at what is happening in New York, it has reached a similar proportion of its population to a small country which is surrounded by Northern Italy (San Marino) which has also topped 1 in 1000 of their population having died due to COVID19.

To help us consider the enormity of this, I have done some simple basic maths in a table below. There is no real sign that the deaths are about to suddenly stop in New York.In case you think that the figures are absolutely impossible, let’s just consider how many people in New York have not yet caught the virus. Of course we don’t know this number.  We know there are almost certainly many more than have tested positive and we certainly hope some have had the disease asymptomatically and that they are hopefully now immune.  But one of the most affected cities in Germany thoroughly screened their population for antibodies and antigens and found only 15% had caught the virus.  It is possible that New York might be similar. In fact after I published this article results of a study suggested 21% of New Yorkers already have antibodies to the virus.  This would still mean that if allowed to spread freely Covid19 would have up to three times more New Yorkers left to infect (a further 60%) before herd immunity might develop and the epidemic naturally burnt out. If this was the case a potential ceiling on death rates per thousand could even be four per thousand, double the worst case calculated in my table

So if the lock down and social distancing were to be completely lifted and if the disease was allowed to spread there might well be a second surge.  And even without that, there are still a lot of people in hospital some of whom will unfortunately die.

The table below simply answers the question what if in fact they are only half way to their total? And what if we allowed the disease to spread elsewhere so that a similar death rate was reached? Please note that these numbers are NOT predictions. Clearly it is possible to suppress the disease at least temporarily, although the European experience seems to be that this requires many weeks of lock down. But if nothing else the enormity of the estimates in this table show us just how much of an impact there has been in New York.

These huge numbers estimated below are not even the worst that this could possibly get if we abandoned all attempts at social distancing and simply allowed the disease to spread unchecked. 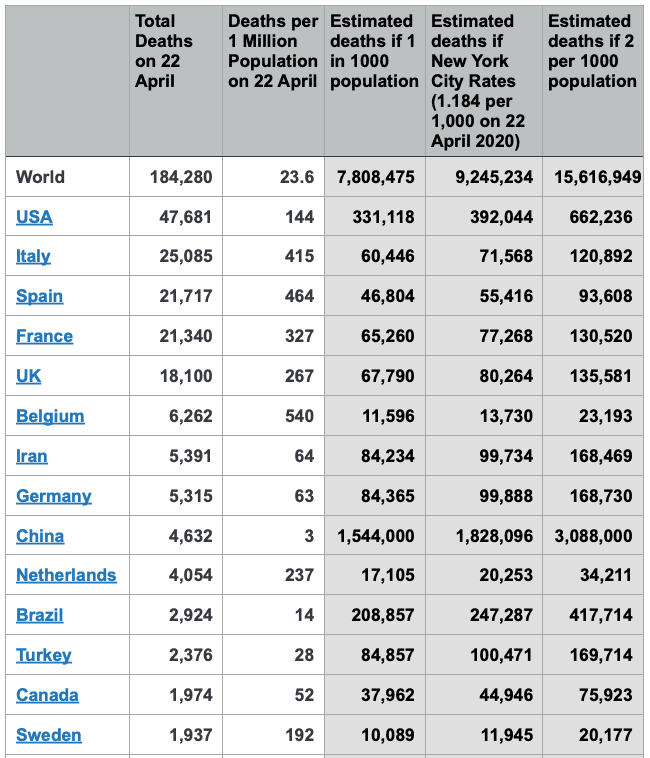 Let’s pray for the people of New York, one of the most famous and wealthy cities in the world. Many of them will be greiving right now. With such a death rate huge numbers of people will know someone who has died and the majority of them will sadly not be able to attend the funerals.

I am not a politician or an epidemiologist. And to be clear I am not predicting that this is what will happen. I am certainly praying and hoping for a much better outcome. But I do think we need to be wise, and not minimise or downplay what is happening. And so today I have a verse for some of the real extremists who have convinced themselves that this epidemic is being over-hyped and is really “just like the flu”.  It is a passage that came to my mind this morning and it is not very complimentary.

They dress the wound of my people
as though it were not serious.
“Peace, peace,” they say,
when there is no peace.
12 Are they ashamed of their detestable conduct?
No, they have no shame at all;
they do not even know how to blush.

In the last week, the UK government was able to change the way it declares its daily figures to include deaths in hospital, in care homes, and in the community where a positive test has been carried out for COVID19. This is a broader definition than some countries in the table, and since the UK is not yet able to do as many tests as some, there are surely many additional deaths taking place.

At a recent press conference one of the experts made the point that we should be careful about making too many comparisons between death rates in different countries at this stage. This is due both to the variation in how we count how many people have died, and the fact that countries are at different stages in their epidemics. Will some who locked down earlier, and currently look like they have done really well, open up earlier and sadly see a greater second peak?

In fact the only way to really assess the impact of this disease will be to look at excess all-cause mortality which will capture hidden deaths caused directly by COVID19 as well as indirect deaths caused for example by people being too scared to go to hospital for help. It is worth noting that in the table below the USA is seen as one nation but if we were to divide it into states then five states have more than double the death rate per million than the USA as a whole: New York, New Jersey, Connecticut, Massachusetts, Louisiana but many other states are much lower.

But with all those caveats here is the latest country rankings by death per million for all countries above a current death rate of 1 in 100,000 population:

April 9, 2020
Caring for the Homeless in Lockdown
Next Post