What If Every Day Was a Parliament of the World’s Religions?

I just returned from the Parliament of the World’s Religions in Salt Lake City. For five days, October 15-19, approximately 9,500 people from over 50 different faiths from all over the world gathered to share their beliefs, learn about each other’s faiths, and to find common ground to work toward peace and ecological harmony. I am a former Mormon turned Pagan and Unitarian, and my LDS wife and I are raising our two children in a multi-faith household, so my interest in interfaith work is a practical one.

The Parliament was an amazing experience. Among the big name speakers were Jane Goodall, Karen Armstrong, Eboo Patel, and many others. (The Dalai Lama had to cancel due to an illness.) But even more amazing were the attendees. Gathered in one place were Catholics and Protestants, Buddhists and Jains, Muslims and Sikhs, Hindus and Pagans, members of various indigenous faiths and others. The sentiment that I heard expressed repeatedly over the long weekend was: “What if the world were like this? What if the Parliament of the World’s Religions represented reality?” It is a powerful thought. What would that world look like? As I thought about it, there were three ways in which the Parliament, as I experienced it, was different.

CLICK HERE TO READ THE REST OF THIS ARTICLE. 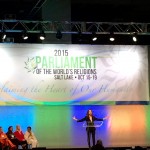 October 19, 2015
Highlights from the Parliament the World's Religions: Sound Bites
Next Post 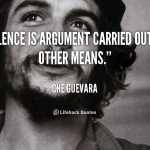 October 23, 2015 A "Truce" Which Requires Silence Cannot Produce Peace
Recent Comments
0 | Leave a Comment
Browse Our Archives
get the latest from
Pagan
Sign up for our newsletter
POPULAR AT PATHEOS Pagan
1