The cherry trees are in bloom here in the San Francisco Bay Area. The white and pink blossoms signal that spring is here. Their beauty brings a certain lightness to the step. The tradition of picnicking under a blossoming cherry tree brings a certain joy to the heart. The San Francisco Cherry Blossom Festival in April is a wonderful celebration of Japanese culture in California as well as the beauty of the flowers and the excitement of spring. 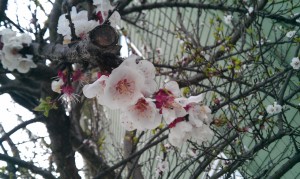 But the festival is in April and the trees have been in bloom since mid-February. When I realized that, I was caught off guard. Is the calendar all wrong?

How strange that as a child I never really paid much attention to when things happened. I was so disconnected from the cycles of nature that even though I enjoyed the San Francisco Cherry Blossom Festival Parade many times from my special perch on the 4th floor balcony at my father’s apartment, I never really thought about when that happened. It was an event, but not one that took place in the context of other events. It just sits there independently in my memory as if there was no time or annual cycle connected to it at all.

For years now I’ve been thinking of “cherry blossom season” as being a time from mid-February to mid-March when the blossoms explode in blooms of white throughout Seattle and then turn into a snow of wind-blown petals that cover the streets. The city is full of cherry trees. In 1976, in honor of the US Bicentennial, the government of Japan gave a gift of a thousand cherry trees to the city of Seattle. The image of windy, rain soaked Seattle with fluttering white petals in the street on my birthday in February a few years ago is a strong memory I just can’t shake.

Seeing the trees in full bloom in Berkeley on my birthday didn’t surprise me one bit. That is, until I started looking these things up and discovered that the “proper” time for cherry trees to be blooming in San Francisco is early March through April and the “proper” time for them to bloom in Seattle starts in late March. By the time of the Cherry Blossom Festival in April, the flowers should be in their prime.

It turns out, I’m not the only one who has noticed this disconnect. Luckily, others who have noticed it had paid more attention as children and had the advantage of elders who had also paid attention to the timing of the cherry blossoms. In Japan, the blossoms are such a big deal that their predicted bloom times are discussed by meteorologists along with the weather on the nightly news! Hiroyoshi Higuchi, a professor at the University of Tokyo and Richard Primack, a professor at Boston University who visited Japan in 2006 wrote a paper linking earlier cherry blossoms to both climate change and the urban heat island effect. This year there seems to be a major shift in Japan, with blossoming times being anywhere from a few days to nearly a full month earlier than last year.

There is definitely some change going on. Climate change is man made, but it is also a dance with nature. We push Her. She pushes back, sometimes smacks us down for our impudence. Like any dance, we’ll step much better if we are careful to watch the moves of our partner. I know that I’ll be paying much closer attention to the first cherry blossoms of 2014. 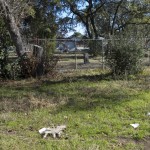 March 20, 2013 Finding place through the eyes of a child
Recent Comments
149 Comments | Leave a Comment
Browse Our Archives
get the latest from
Pagan
Sign up for our newsletter
POPULAR AT PATHEOS Pagan
1

You Cannot Be Taught To Be...
For Puck’s Sake
Related posts from A Sense of Place