Why Contraception Is a Bad Idea #1 — Natural Law

After the drama of our last post, I believe I owe all of you studly individuals an explanation. Of course, in the particular situation of the HHS Mandate, I don’t think it matters one whit whether you agree with the Church’s teaching on contraception: It is an affront to all religious liberty, and should be opposed as such. But the 800 lbs. Papal Bull in the room remains: Well, why is the Church opposed to contraception? I will attempt to answer that question. There may be some pictures. Do not fear, they are neither for your sake, nor the depth of my argument, only for the gratification of my ADHD.

(Disclaimer: I understand that there are legitimate medical uses for hormonal contraceptives. As Humanae Vitae states “The Church does not consider at all illicit the use of those therapeutic means necessary to cure bodily diseases, even if a foreseeable impediment to procreation should result there from—provided such impediment is not directly intended for any motive whatsoever.” This article is written with the assumption that contraception is being used to solely and directly to prevent pregnancy.)

The Case From Natural Law

Natural Law is very simple. It claims two axioms: That all things should achieve their natural end, and that situations and actions can be decided as contrary to an organism’s natural end based on their effects upon that organism. For example, putting a rosebush in a closet leads to the withering of the rosebush. To wither is not the natural end of the rosebush. In fact, inherent in the rosebush’s biology is its natural goal of growth and reproduction. Therefore, rosebushes should not be placed in closets. If you subscribe to some sort of nihilistic-hipster-philosophy that claims something like, “Yeah but couldn’t the withering of the rosebush be just as good as its flourishing?” then go outside, take a knee, and punch yourself in the face. If, however, you are of the sound, existential view that humans and rosebushes were both meant to flourish, read on:

To argue otherwise is to look at a farmer casting seeds upon fertile ground and claim that he is casting the seed for the pure joy of seed-casting. This is not to say there is no joy, even a wild joy, to be found in planting a field. It is simply to note that it would be an insane man who would plant his field by the logic that throwing seeds is fun, and then become shocked and annoyed when his field bore grain in due season. Every part of the action of sex speaks to the creation of new life. Yet regard the reaction of modern man, who plants his seed on fertile ground, and the modern woman, who receives that seed…okay, wait, gimme a sec… 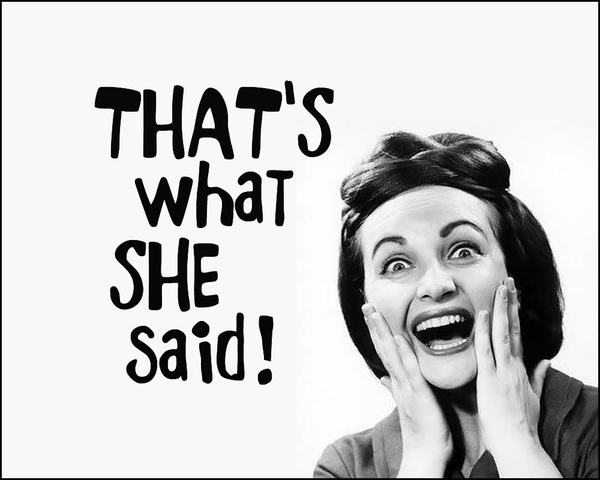 …and then — upon being confronted with new life — cry “How did this happen?” or “I can’t believe this happened to me!” and in fear kill the new life they have created. In the midst of a world of insane farmers, I hold this truth to be self-evident: The natural end of sex is both unity (pleasure) and procreation (babies) and these things are inseparably intertwined.

To contracept is to remove the possibility of procreation from the equation. Thus sex does not achieve its natural end. This is hardly contested. What is contested is whether or not this is a bad thing.

If an act does not achieve its natural end, that act is detrimental to the organism. If the

It is also worth pointing out that in each case, were an act that does not reach its natural end to be accepted as normal and popular, society as a whole — or the humans species, if you will — would suffer. If we were all bulimic, we wouldn’t last long.

So we arrive at contraception. To summarize my argument: Sex is by its nature both unitive and procreative. To deny an essential part of its nature is to prevent sex from achieving its natural end. When acts do not achieve their natural end, the acting organism suffers. When those acts become widespread, society suffers. Now I grant that a human being is a fantastically complex organism, but if what I say is true — that the act of contraception prevents sex from achieving its natural end — the human being must suffer as a result of contraception.

And as it turns out, they do. If it is a hormonal form of contraception that interrupts a woman’s actual biology — and thus the natural ends of a her biological acts — then its harm is clear: Hormonal contraceptives increase the risk of breast cancer in women, and it is now argued that they increase the risk of prostate cancer in men. Their list of side-effects is tremendously long — stroke, heart-attack, and blood-clots being among my least favorites.

(Here it may be argued, yes, but hormonal contraceptives reduce the risk of ovarian cancer as well, and there is thus a “canceling” effect that needs taking into account. But low-dose birth control pills, the most commonly prescribed hormonal contraceptives, have been proven to reduce a woman’s risk of ovarian cancer by less than 1% per year of use. This is not to say that such a reduction is not beneficial at all, but it must be pointed out that hormonal contraception reduces the risk of ovarian cancer only insofar as it imitates the natural end of sex — pregnancy. Pregnancy leads to a 40% “decrease in the risk for epithelial ovarian cancer with the first live birth,” a risk that is further decreased by subsequent breast-feeding. It would take forty years of being on the Pill to achieve the benefits that having one baby provides. Please do not quote the widely circulated statistic that the Pill reduces the risk of ovarian cancer by 40-80%. This statistic is the result of an average, taken from a study that included women who used high-dose birth control pills, had been on the Pill for up to 20 years, and had already had one or more children. Incidentally, the risk-reduction for high-dose birth control pills is 7% per year, but these are the market’s least prescribed pills, as women reject them for their extreme side-effects.)

I would also argue that the use of some physical barriers — i.e. the condom, the female condom — by seeking to avoid the physical contact that allows the possibility of procreation, actual reduce the physical pleasure of unity, except I don’t have a lot of expertise in that area. But a human being doesn’t just suffer from contraception on a physical level. There is an emotional, psychological toll.

Think of the statement contraception makes: We tell our sexual partners, in the act of sex, I want all of you, totally, completely, except your fertility. You keep that to yourself. Or if we’re guys, keeping our girls on the Pill, we’re effectively saying, “This part of you I must control. I love you, and I’ll sleep with you, but on the condition that you take a hormone preventing your natural, bodily state.” This may be part of the reason NFP users have an average divorce rate of 0.2%, and experience over all “happier marriages.” Not because they are better, but simply because, like a rosebush in the sun, they are flourishing.

And society too pays a toll for contraception. Besides that if you take the contraception attitude to its logical conclusion, you arrive at the end of our species, there is John C. Wright’s argument — a fantastic philosophical construction, by the way — that “widespread socially accepted use of contraception in a society makes the illusion of consequence-free sexual vice possible, and that illusion is not possible otherwise.” The plethora of problems we face today — from abortion to S.T.D’s to broken family structures — are the result of a mentality that sex does not have consequences, a mentality caused — by and large — by contraception.

So the Church isn’t simply saying “don’t use contraception or God will smite you.” Far, far from it. The Church is saying that our very bodies, our very beings reject the act of contraception as a violation of natural law. It is a sin, yes, but more in the sense that bulimia is a sin. It is a rejection of a good, natural selves, and the fullness of our own potential. Contraception doesn’t allow sex to achieve its natural end, and thus, like putting a rosebush in a closet, it leads to a withering, whether that be physically, emotionally, psychologically or socially. And human beings were not meant to wither, but to have life to its fullest.

Thanks for reading! I imagine this won’t go down well, but please keep an open mind in the comment box. If you are blatantly trolling in excessive bout of injured pride, I will replace your comments with my favorite sections from the papal encyclical Humanae Vitae.

February 4, 2012 Why Contraception is a Bad Idea #2 -- Scripture Prohibits It
Recent Comments
3 Comments | Leave a Comment
"All political art is lame?"
George Arnold Ghosts With Erections
"I don’t know what bible your reading, but if you really think Jesus wanted his ..."
George In Defense of Covering Catholic Churches ..."
"1. Conflates a child's sense of wonder with religion.2. Untold thousands of children have been ..."
Lucius 3 Arguments Atheists Aren’t Allowed To ..."
"Brilliant and mind opener. You're hot! Jajaja"
agusq1970 Modesty Sets Fire
Browse Our Archives
Related posts from Bad Catholic