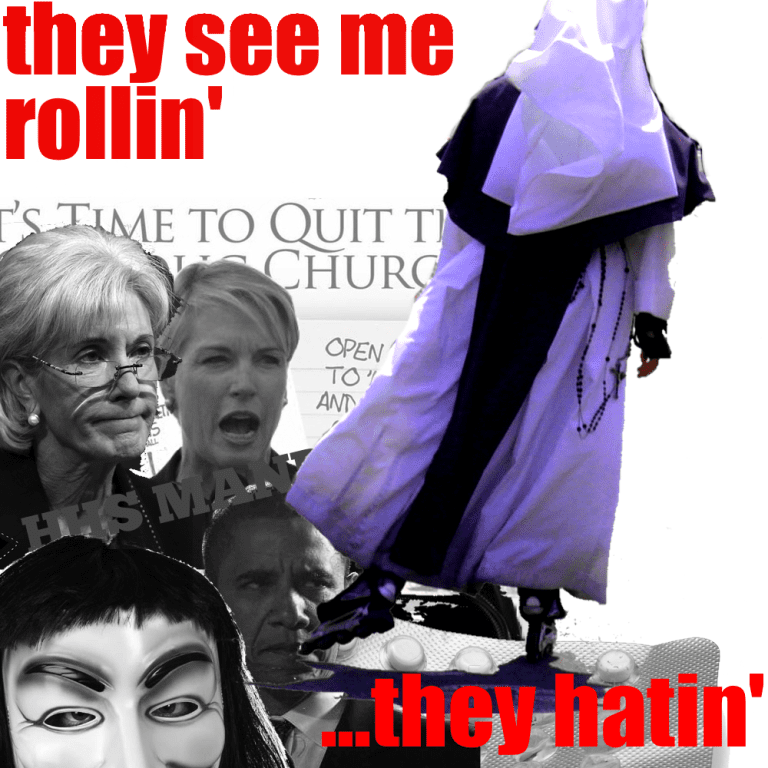 I got my forehead ashed, pulled out my self-flagellation whips, gave up writing for a bit, and BAM! the awkward enemies of Catholicism descended. Coincidence? Absolutely.

Anyhow, I’m here to summarize just how terribly our enemies have failed to troll the Church these past few weeks. I’ll grant their rage was apocalyptic. (Enough to scare an Episcopal, even.) But it was all sound and fury — signifying nothing, affecting nothing, doing nothing except strengthen my conviction that in this entirely crappy world, the Church is doing something right.

1. Planned Parenthood’s “I Have a Say” Campaign

The brilliant minds that decided it was a good idea to promote themselves as “your private area‘” have done it again! Realizing the necessity for people uninvolved with Catholic teaching to testify as to whether the Church should be allowed to follow its own teaching, Cecile Richards called on pro-Church-buying-your-artificial-contraception women to make YouTube videos declaring their needs. It’s funny because: 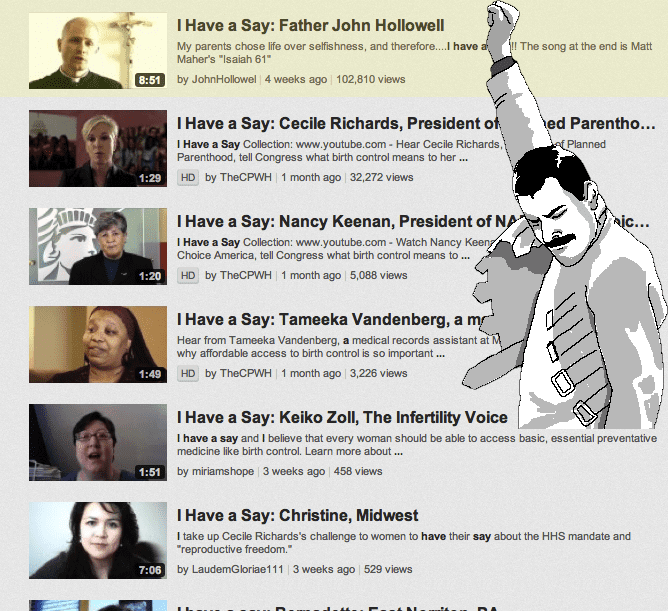 In case you’re unaware, that guy with the most views at the top? The one with three times the views of the President of Planned Parenthood? Yeah, that’s a Catholic priest, laying down the message of Resistance. So please, Cecile, if you’re going to start these fights, at least try to win them. Spend some government money or something. But don’t let a priest beat you.

Now when I first heard that the hacker group Anonymous had crashed the Vatican’s website, I thought the following: But you wear Catholic masks! I thought you were a lay apostolate! Then: Nooo! How will the 7 Franciscan Students who don’t have the print editions look up the Apostolic Constitution CARTHAGINENSIS in the original Latin?! You’re shaking St. Peter’s to its core! And finally: For the love of all things bright and beautiful, tell me you changed the parchment background while you were in there!

But then the hilarity subsided and I realized just how pathetic of an attack this was. They’d already failed to hack the Vatican’s website before at World Youth Day, they failed to do it again, and so they settled for crashing the Vatican’s servers, clogging it with data requests. They couldn’t get any information, they couldn’t defame the site, they just made it unavailable for a day. Just to be clear, a website that looks like this:

…held up better than Sony and the FBI. Anonymous claiming some sort of victory over the Vatican is embarrassing to say the least, like a kid who tells his friends he won the fight because he managed to step on your toe. But the best part of the idiocy was Anonymous’s reason for doing it: It was, according to their statement, a “response to the doctrine, to the liturgies, to the absurd and anachronistic concepts…”

Wait, what? The liturgies? The website of the Roman Catholic Church got shut down because of her liturgies? There are almost too many ways to make fun of that. You’re saying the fact that we have this: 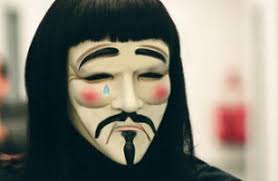 Regardless of why the liturgies of the Catholic Church make them squirm, the silliness is this: Anonymous stands for — or used to stand for — freedom of speech and freedom from censorship. I know wearing the mask of a Catholic radical should have been a tipoff, but troll-people — you really don’t understand the concept of irony. And as I write this I found that Anonymous managed to hack an old server the Vatican doesn’t use any more. 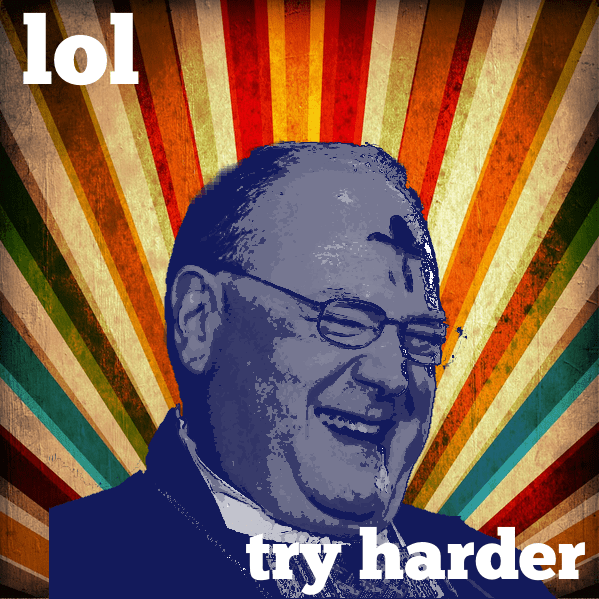 This one was my favorite. Every now and then Atheists do the Catholic Church a favor, and it’s always a moment for joy and celebration. (Like when Richard Dawkins published the God Delusion, and we all got to watch a biologist cry trying to head-butt a Dumb Ox.)

But The Freedom From Basic Social Abilities Foundation took center stage this time, spending all sorts of cash on an ad in the New York Times entitled “It’s Time To Consider Quitting the Catholic Church.” It was aimed at liberal Catholics, because Muslims are scary.

It’s basically a rerun of this puppy… 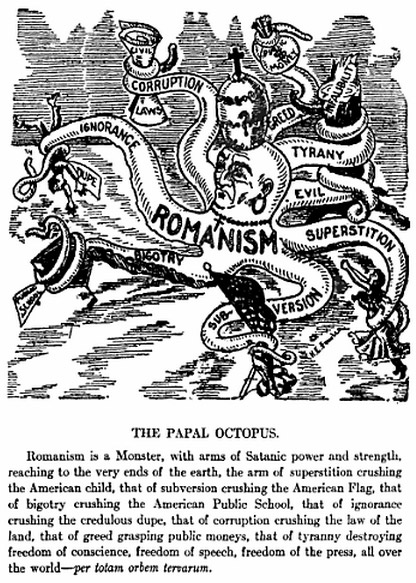 …with more whine and less balls. But once I got over the joy of their puns (“Exit en mass,” did you think of that all by yourself?) and really read it, I couldn’t believe how nice these folks were being. They essentially summed up what the Church has been trying to tell people for years, that if you aren’t going to live the teachings of the Catholic Church and profess what she professes, you do not understand what it means to be Catholic — to be a member of the Body of Christ.

When the NYT ad said that those who support abortion, sterilization, and contraception should realize the Church is never going to change its mind and consider leaving, I thought, well shoot! That’s what we’ve been telling Nancy Pelosi for years!

The ad proclaimed the alarming indestructibility of Church doctrine, and Her refusal to conform to our fads and fashions. It came from a moronic angle, but to the liberal Catholic nourished by the beauty, truth and goodness of the Church — who would no more consider leaving the Church than leaving his family — it begs an examination of conscience. Sure, it says “Here is what the Church believes. Here is what you believe. There is a disparity between the two. Leave the Catholic Church.” But there is an unspoken alternative to the NYT ad’s message, an alternative every bad Catholic will hear, whether he wants to or not: “Repent and believe in the Gospel.”  The ad leaves only two options: Either you, or a two-thousand-year-old institution that produced the greatest art, theology, philosophy, science, and music the world has ever seen, is correct. Know thyself.

Now don’t mistake my trivialness. This is unprecedented bigotry. It’s been a long time since a specific religion was publicly attacked and defamed in a national newspaper, and they weren’t exactly times of love and tolerance. But the reasons our enemies are foaming at the mouth over the Church are the very reasons we embrace Her. The Church is too pro-life, too ancient, it stands against the modern age — amen, amen, in saecula saeculorum.

So I thank God for the enemies of the Church. With every ugly, classless attempt to end the Eternal Revolution, to persecute the Persecuted Body, and to scorn the Communion of Saints, they remind us of how good, how true, and how beautiful the Bride of Christ is. A light shines in the darkness, and the darkness — somewhat hilariously — cannot comprehend it.

Update on my super-secret Communist project: It has been delayed, but I’ve decided to give you a hint: 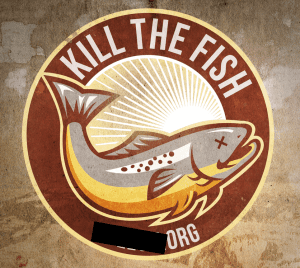 March 30, 2012 Christopher Hitchens and Groaning During Sex
Recent Comments
0 | Leave a Comment
"I don’t know what bible your reading, but if you really think Jesus wanted his ..."
George In Defense of Covering Catholic Churches ..."
"1. Conflates a child's sense of wonder with religion.2. Untold thousands of children have been ..."
Lucius 3 Arguments Atheists Aren’t Allowed To ..."
"Brilliant and mind opener. You're hot! Jajaja"
agusq1970 Modesty Sets Fire
"Great quality content man, I am really impressed with this one. Thanks for sharing this ..."
diksha gupta Culturally Catholic, Baby.
Browse Our Archives
Related posts from Bad Catholic