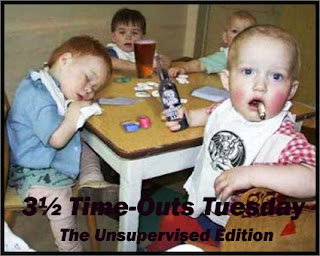 I’ve been meaning to do this for ages, since Larry D first invited me to, but I always forget.

Not today. Today I remembered. This is pretty handy for those of us who don’t/didn’t have much (read: any) time to blog today. Larry says that this is the “testosterone version of 7 Quick Takes” and that I’ll get my man card punched for joining, for which I cannot wait.

And just for fun, and maybe to take the testosterone down an octave or twelve, I’m numbering  mine in French, mostly to see if I can remember how to count to three in French. Oh fine, I swear I won’t check it on google. What you see is what is in my brain, or lack thereof.

Un
Remember how I am a total hypochondriac? I have a dry, slightly darkened patch of skin (that’s very tiny, even though it looms large in my imagination) on my ankle that developed in the last week. Since I am prone to eczema, I’ve been putting cream on in, but just for kicks I googled it yesterday and the internet told me that I have venous stasis.
Then I googled venous stasis. Then I clicked on the images to compare.
Oh holy hell, that was a major mistake. First of all, this is not venous stasis, because it’s eczema, and second of all, I feel incredibly sorry for every person who has to suffer venous stasis.
But these pictures. Oh, vomit. Don’t you google it! It would be the worst mistake you’ve ever made. I’m not kidding. I literally feel like I’m going to puke. I might, actually. If anything I’ve ever seen in my life has convinced me to get my butt back to running and away from sugar and excessive carbs for the foreseeable EVER, it was those pictures.
Due (I know that can’t be right)
I’m currently doing laundry in our kitchen sink because our washing machine is broken, has been broken since last week, and will be broken until next week when the appliance company light-years away in Naples finally “gets out this way” to fix it.
This weekend I decided to do a large load in the bathtub. That was a mistake, since I didn’t really manage to get them very clean. The clothes all still smell faintly musty and worn. But I insisted that we were going to wear them anyway since I put a lot of effort into that load of laundry and I wasn’t about to wash it all again, in smaller loads, in the sink.
I’m pretty much regretting that decision now as they were mostly my clothes. And I keep having to smell myself.
Trois
We had tomato soup and sweet potato fries for dinner tonight. Kind of a nasty combination, maybe, but I needed to use up things in the pantry.
And Liam devoured it. I’m so happy to have a child who will reject anything in favor of tomatoes and who will steal all the olives off my pizza. At last, a child after my own heart.
Trois pont Cinq (I have no clue how to say “one-half”)
I gave in and googled French numbers. I really ought to brush up on my lack of French. That’s shameful.
Go read the other time-outs at Acts of the Apostasy!
Previous Post

February 10, 2012 This is The Best Day of My Life!
Recent Comments
0 | Leave a Comment
"So what you're really saying is that you use NFP because you don't want to ..."
Naters The Super Suckage of NFP
"I'm sorry, but planning pregnancy involves using birth control. did you miss that memo?"
leesa maire All Parenthood is #UnplannedParenthood
"Without knowing that God has a purpose for everything, my sufferings in life would be ..."
Jim J. McCrea Sentimental Claptrap, Part V: God Has ..."
"Has the photo been changed? Because what's at the top right now is photo of ..."
Evelyn Sex Breasts and Babies
Browse Our Archives
Related posts from Barefoot and Pregnant