Greek Easter or: How I Learned to Stop Whining and Love Traditions 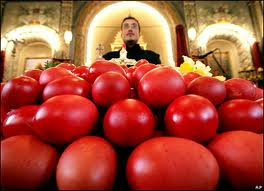 And so it begins. The great, heroic undertaking that is Easter Preparation Week.

Growing up, we didn’t have many holiday traditions. The only thing we always did was go to both my dad’s parents’ house and then my mom’s parents’ house. My dad’s mom, before she died, would make the same meal for every holiday: some type of meat, mashed potatoes with cream gravy, macaroni and cheese, green beans with bacon, fried okra and dinner rolls (fourth-generation Texan, y’all). The only variations were turkey and dressing at Thanksgiving and her divine fudge at Christmas.  My mom’s mom had an ever-varied menu, augmented by interesting contributions like venison sausage from my hunting uncle, bourbon balls that were more bourbon than anything, and several unfortunate years of turduckens. My own mother made sweet potato casserole and pumpkin pie cake for Thanksgiving and a breakfast casserole each Christmas morning. But the one thing we never had was a Grand Dinner. You know what I mean? The kind that is preceded by days of preparation and anticipation, where tablecloths are laid and candles are lit and traditional foods are served and if anything is forgotten or changed the whole family acts like catastrophe has struck? Yeah. That wasn’t my family.

Then I married into that family, and holidays became a whole new experience. Like learning a foreign language, I had to learn which dishes were served on which holiday, which were ranked in order of importance according to the tastes of various family members, whose napkin-ring holder belonged to whom, which side of the plate the fork went on, which dishes could be altered a little to ease preparation and which must not be altered, ever, which holidays were considered important enough for my father-in-law to abandon his beloved boxed wine in favor of bottled, and how holidays were ranked by this family who believed that nothing was done right unless it was done like their mother did it.

I’m not going to lie, this was a total shock to my system. Holidays were fun growing up, but they weren’t Occasions of State for us. They were pretty informal. We wore jeans regularly. One unfortunate year I wore purple velour leggings. We laughed and ate and talked and then went home, and sometimes my sister and I would go see a movie at night. No big deal.

But in my husband’s family, jeans are a holiday faux pas. They are not allowed. If you show up in jeans the Ever-Teacher will make you go change, and then you’ll have to go back to the study to have a talk about showing proper respect. Once everyone is assembled and properly attired, the men usually get dragged back to the study anyway for some talk or other while the women help my mother-in-law in the kitchen and try to keep the kids from killing each other. (No nasty comments in the combox about oppression or anything, okay? My mother-in-law and all three of us daughters-in-law absolutely love cooking, so this is fun for us. My Italian sister-in-law isn’t such a fan of cooking, and she’s usually running around having a crisis about something or other, so it’s not like the women have to cook.) Dinner is always late (because have you ever tried keeping to a schedule with a house full of people?), and when the table finally has enough chairs, dinner is on it, and the table has been moved down six times so my father-in-law doesn’t feel crowded, we eat.

It’s really been an experience, learning to navigate a family with deeply-rooted traditions. When we lived in Texas we spent every holiday splitting time between my family and the Ogre’s, so we never had a chance to develop any holiday traditions of our own. But when we moved to Vegas, the one thing I insisted on was that I be able to choose my own holiday menus and not make every dish the Ogre’s mother makes for every single holiday. I wanted to develop our own family traditions, and I also believe that ham should never grace any holiday table, ever. Or any table at all, for that matter. He agreed, with one caveat: Easter had to remain traditional.

You have to understand that my husband’s family is Greek. But really Greek. My father-in-law was raised in the Greek Orthodox Church/culture, and my mother-in-law entered into that culture when they got married. She got cookbooks and cooking lessons and lots of other lessons on all things Greek. Eventually they converted to Catholicism, which caused a huge rift in the family, and my father-in-law is very clear-sighted and honest about the faults and dangers in the traditional Greek culture. (Never mention that you liked the movie My Big Fat Greek Wedding to him unless you want to see a truly apoplectic reaction.)

But they’ve still held onto some of the Greek traditions that my father-in-law was raised with. This means that: 1) Easter is the most important day of the year, 2) Easter = lamb spaghetti, 3) spanakopita and koulourakia are essential (and delicious) additions to the Easter table, 4) there must be eggs dyed the correct shade of deep red, no matter how many craft stores you have to visit to find the two specific fabric dyes necessary, 5) all family members must greet each other with “Christos Anesti!” and “Alithos Anesti!”, and 6) the egg-cracking game is and always will remain the official sport of the Alexander family.

In the interest of full disclosure, I spent my fair share of time whining about having to make Greek Easter. I actually like all the food…well, okay, lamb spaghetti isn’t my favorite food combo ever, even though the Ogre dreams about it all year. My whining, though, was less about the actual food I was making and more about the idea of not getting to make whatever I wanted to. But after a while I began to see how important Greek Easter is to my husband, and that insisting on creating my own menu was really wasn’t about not being oppressed or making sure my husband knew that if I was going to cook for him I was sure as hell going to cook what I wanted. When it came down to it, insisting on creating my own menu for Easter was about power. I wanted to show my husband that I would not be bound by his mother’s menu, that it was my house and my family and that if I was the one cooking I was also going to be the one to decide what we ate and when, damn it.

It sounds silly and petty to me now, but those were the types of disagreements that seemed insurmountable early in our marriage. Luckily I mellowed out over the years and learned to love my husband better. I learned that serving my husband and making sacrifices for him isn’t a sign of weakness but a sign of strength, a sign that my love for my husband had become greater than my pride. And now I look forward to all the Easter preparations and the Easter dinner just as much as the Ogre does…honestly, I might actually look forward to it a little more by now.

I’m not going to lie, I’ll miss my internet-trollery time this week. But I also find myself surprised each year at just how much I have come to love these Greek traditions, including the monumental preparation and the funny words I feel special saying and knowing the meaning of. It is something, having traditions. Our culture is so bereft of traditions of any kind, except perhaps Superbowl Sunday, that marrying into a family where traditions are not only kept but cherished was, once I got over myself, like finding that a whole new world existed. It was, on a smaller scale, similar to the way I’ve felt since converting. There’s a whole wealth of tradition and symbolism and beautiful, mysterious words that mean something wonderful in Catholicism. I can understand why non-Catholics act as though traditions are shackles that we are bound by; I felt that way myself, for years. But it’s such a narrow view of things, and is really a mindset that is more about the self than anything else. Traditions are such a thing of beauty, such a rich and multi-faceted gift we have been given to remind us of what our faith is and what it means, and to comfort and encourage us as we attempt to live it. I’ve found great comfort and joy in discovering traditions, from the solemn tradition of the Easter Vigil to the solemn tradition of spanakopita, and I’m looking forward to passing on this great wealth of tradition to my own children.

Tell me about your Easter traditions! Were you raised with traditions? Did you make up your own, or do you celebrate more informally? What’s your favorite thing about the way you celebrate Easter?

April 8, 2012 Christos Anesti!
Recent Comments
0 | Leave a Comment
"So what you're really saying is that you use NFP because you don't want to ..."
Naters The Super Suckage of NFP
"I'm sorry, but planning pregnancy involves using birth control. did you miss that memo?"
leesa maire All Parenthood is #UnplannedParenthood
"Without knowing that God has a purpose for everything, my sufferings in life would be ..."
Jim J. McCrea Sentimental Claptrap, Part V: God Has ..."
"Has the photo been changed? Because what's at the top right now is photo of ..."
Evelyn Sex Breasts and Babies
Browse Our Archives
Related posts from Barefoot and Pregnant