My Heels and Heart, Tripped Up 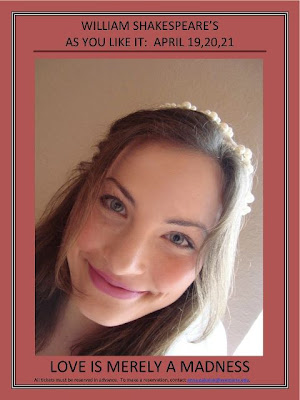 Last night, the Ogre and I went to see the AMU (that’s Ave Maria University, for the uninitiated) students perform As You Like It.

Now, I’ve been in love with theater since I was a kid. I was in a children’s theater group for five years, from age ten until I was fifteen. I’ve played Peter Pan, Becky Thatcher in Tom Sawyer, Bert Healy in Annie, Katherine in The Taming of the Shrew, Gwendolen Fairfax in The Importance of Being Earnest, the unnamed minstrel in Once Upon a Mattress, and dozens of other characters. I’ve sang, danced, wept, and sword-fought onstage. I’ve seen more performances than I can remember, from a high school production of Everyman wherein God was most unfortunately portrayed as a woman in gold lamé to The Phantom of the Opera in Vegas. I’ve seen several Shakespeare performances at Dallas’ Shakespeare in the Park, including a poorly interpreted performance of The Tempest and a tepid performance of one of the histories that was so unremarkable I can’t even remember which one it was. I’ve seen a Dallas modern theater troupe put on a disturbing performance of Macbeth in which Macbeth and his lady came so close to having sex onstage that I felt like my brain had been violated. I’ve seen a fantastic performance of A Midsummer Night’s Dream at Booker T. Washington high school, with a Puck better than any I could have imagined, and I’ve seen my own husband brandish his hand-forged sword as Fortinbras in UD’s outdoor performance of Hamlet.

I started UD with a double major in English and drama, but quickly found that I wasn’t the star actress I thought I was and stuck with my strength in literature. That didn’t stop me from going to many plays, though, for UD’s drama department was excellent. The student body at UD was roughly double the size of Ave Maria’s. The drama department was firmly established and helmed by capable, talented people, and there were many talented, versatile actors and directors among the drama majors, including my sister-in-law and Dwija from House Unseen. The plays at UD were great. Some were fun, some were moving, some were philosophical and some were tragic. Overall, while the theater was modest, it was fully equipped to handle a variety of plays and the acting was consistently excellent. Thus, and here I’m going to be really honest, I didn’t have the highest of expectations last night.

Ave Maria does not currently have a theater department. This play is being performed by Dr. Travis Curtright’s Shakespeare in Performance class. That’s one course, with only one section, with only about 22 students out of a total university population of 750. So, with such a small talent pool to pull from and so few resources to draw on, I wasn’t expecting the caliber of performance I am accustomed to.

I was so wrong.

The students who performed last night easily eclipsed not only any of the plays I saw at UD, but I can also say, unequivocally, that I have never enjoyed a performance as much as I enjoyed their As You Like It.

It was remarkable. These students put on the play in a classroom with chairs lining three walls. The only thing dividing the stage from the backstage area was a long curtain. There was no lighting–the play was performed with the house lights on. The props were minimal. And still it was the best Shakespearean performance I have ever seen. Hands-down better than anything I’ve ever seen at Shakespeare in the Park. The actors enchanted the audience from the very beginning. There was raucous laughter, whooping, cat-calling, and so many low-pitched “ooooooohs” after all those incomparable Shakespearean insults that someone could have recorded it for a sitcom laugh track. I’ve never seen an audience so engaged.

The play was Shakespeare as he is meant to be performed. The actors engaged with the audience. They flirted with the girls, pointed out the lovers, mocked the melancholy scholars, and called us all fools. Orlando even turned an audience member into a tree to hold his horribly foolish love-poetry. The blocking was superbly accomplished. The actors moved so naturally and effortlessly that I didn’t even notice how tightly controlled it all was, how the actors moved along diagonals and arranged themselves in triangles, maintaining visibility and heightening dramatic tension. And the actors were fluent in Shakespeare. I was truly astounded at how easily the words dropped from their lips, as if they had been speaking late sixteenth-century dramatic verse all their lives. They even understood what they were saying. I can’t tell you how many times I’ve seen an actor rattle off a line from Shakespeare with only a vague idea of what the character is actually saying. These kids got it. They got the jokes and the innuendos, and their ease with the subtle nuances made their characters come alive. I’ve found some Shakespearean performances difficult to follow, even when I’m familiar with the play, because the actors emphasize the wrong words or move at the wrong time. These actors knew the language so well that the play was as easy to follow as anything written in modern English.  And they were good. They played the parts so well. Duke Frederick was outrageously pompous and self-important; Orlando was heroic and swoon-worthy and hysterically sappy; Rosalind packed enough spirit and sparkle to overshadow just about everyone on stage with her; Celia was the perfect balance of loving devotion to Rosalind and sensible skepticism of Orlando; Touchstone was masterfully executed as the wisest fool who ever graced Arden; Silvius and Phoebe were so wonderfully pathetic that the audience couldn’t decide whether to laugh at them or pity them; and Jaques… Jacques was so charmingly melancholy and cynical that by the end of the play I had fallen in love with him and didn’t know what I was going to tell the Ogre.

But what really made the play so awesome were all the extra little additions. When we came in the actors were playing instruments and singing, and they did the same during the intermission. But these were no flat-footed attempts to re-create imagined songs that might have existed in the forest of Arden. No, these were modern songs, played on simple instruments and given the students’ own musical twist. New words, shifts in harmony, and an homage to Michael Jackson’s Thriller made me want to get up and dance with them. The singing was great. I was actually surprised by how musically inclined they all seemed to be. The last song and dance number, though, which the entire cast took part in and which was placed between the end of the play and the epilogue, won me over to Ave Maria students forever. I don’t want to ruin it for anyone who might be seeing the play in the coming weeks, so I’ll just say that there was such a spirit in that song and in these students that it made me want to cry. No exaggeration. These students love Ave Maria University in a way I haven’t seen since I left UD. I got that same sense from them last night that I always get when I go back to my own alma mater…the sense that they belong to this school, that it is a special, wonderful place like nowhere else in the world, that they love this school and that no matter where they go after graduation, Ave Maria will always be home.

Even if we’re only here for a short time, I am so glad to be a part of this community. Glad isn’t quite a strong enough word. After we left UD the Ogre and I both felt like we had gone into exile. I’ve always thought that the only way I’d ever really feel at home again is if we somehow ended up back at our alma mater. But I’m finding, here in the swamps of southwest Florida, that there might be another kind of home for us, one just as extraordinary as UD.

Go ahead, watch it again. You know you want to.

April 2, 2012 Greek Easter or: How I Learned to Stop Whining and Love Traditions
Recent Comments
0 | Leave a Comment
"So what you're really saying is that you use NFP because you don't want to ..."
Naters The Super Suckage of NFP
"I'm sorry, but planning pregnancy involves using birth control. did you miss that memo?"
leesa maire All Parenthood is #UnplannedParenthood
"Without knowing that God has a purpose for everything, my sufferings in life would be ..."
Jim J. McCrea Sentimental Claptrap, Part V: God Has ..."
"Has the photo been changed? Because what's at the top right now is photo of ..."
Evelyn Sex Breasts and Babies
Browse Our Archives
Related posts from Barefoot and Pregnant