Today the Anchoress made us Patheos Catholic bloggers aware of a lovely post Terry Nelson wrote about the Pope’s message for the 47th World Communications Day. She was drawing our attention toward his concluding paragraph, where he specifically mentioned Patheos.

I’m very impressed with the Pope’s address and the commentary I’ve read from others. He recognizes the need for cordiality and friendly discourse. It would seem to me the Holy Father would actually praise the Catholic presence on Patheos – in fact it seems to me, *Patheos is a useful model for Catholic bloggers in the new “agora”.  I mention Patheos in this context because there was criticism of Catholics who signed on with the site despite the presence of advertising and policy statements which were more or less non-Catholic yet inclusive, and ‘stuff’ like that.

There exists not a small amount of animosity toward Patheos in the Catholic blogosphere, so it really was gratifying to read that. But although I tried to ignore it, while I was reading the post I got that sick, sinking feeling in my stomach.

Hey, self, said myself. Terry’s not talking about you. Cordial? Nope. Friendly? No way. Guess what you’ve been doing? Here’s a hint, straight from the only Pope you’ve ever known:

“In the digital environment, too, where it is easy for heated and divisive voices to be raised and where sensationalism can at times prevail, we are called to attentive discernment.”

That’s not fair, said I to myself. I’m almost always cordial and friendly. I’ve tried really hard to be patient and not divisive or heated. And if you’re talking about that Michael Voris thing, that doesn’t count. Come on! He deserved it! Plus, sometimes a girl just needs to rant, you know?

No, said my stupid, honest, irritatingly square conscience. You don’t need to rant. You just want to. And fine, go and do it in a closet or something. But don’t do it in an online platform that reaches thousands of people a week. All you are doing is causing scandal and tarnishing the name of Patheos, not to mention the name of Christ whom you claim to represent to all in an inter-faith forum. That’s to all, yo. Even Michael Voris.

I hate my conscience. Being snarky is fun! I love snark. I love me some Bloggess and some Electric Venom. I love to write snark. A wise editor once told me never to be snarky. That is advice I hold fast to sometimes and try my best to ignore other times. It’s just that snark is so much fun. And people eat it up. They love it. Just like I love it.

Until it’s turned on me. I’ve been the target of some pretty snarky blog posts, comments, and entire forum threads. It’s not fun to be snarked at. But it’s even worse when they’re right. It’s worse because it takes twice as much time to get yourself to admit that yes, you’ve been a total asshat, because you’re so hurt and angry about the asshats who are laughing snarkily at you.

I was exhilarated when I published that Michael Voris post. It was so much fun to write. The words came easily. I enjoyed myself tremendously. I felt some conscience-twinging before I put it up so I passed around the Catholic Patheosi to get reactions. Then I mostly ignored the negative ones and published it. It was a solid post, I told myself. Maybe not the most charitable, but a post, and I didn’t have any more time to blog that day. Whatever. I can’t be charitable all the time, you know, I told the Ogre. Sometimes I just have to tell it like it is.

In the post, I couched my rant in terms of “this is really a public service announcement, you know, just so that non-Catholics don’t think we’re really this deranged.” That was completely disingenuous, and not even cleverly so. It was a weak excuse to foam at the mouth, throw someone under the bus, and stir up a hornet’s nest. I don’t actually know if that was a consciously-formed intention, but I sure did refresh the combox gleefully that afternoon. I was even disappointed that there weren’t more angry commenters.

I’m sure that Michael Voris didn’t see that post, but if he had, it would have had the same effect as walking up to him on the street and spitting in his face. I made no coherent argument. There was no true concern and not the slightest hint of charity. I do think he was wrong. The video did upset me. The mature, charitable, Christian thing to do would have been to write a post laying out an argument, pointing out errors, and attempting to open up a dialogue. Instead, I laid on the virtual floor and kicked and screamed like my toddler sometimes does. She gets sent to time-out for that, and has to come back and apologize.

So this is is me, coming back and apologizing. In no way did anything I wrote in that post contribute to fruitful dialogue in this virtual reality. I do think that video is wrong on so many levels, but throwing a public hissy fit about it only caused more division, strife, and anger-the very things I was upset about Michael Voris doing.

I talk often about how much I love my alma mater, the University of Dallas. I love her primarily for freeing my mind enough that I can see what is good, what is true, and what is beautiful. Since my college days, I’ve gone from just seeing the good, true, and beautiful to pursuing it. So these words from our Papa hit me like a punch in the gut. I’m pretty sure I actually said, “ooof!”

Given the reality of cultural diversity, people need not only to accept the existence of the culture of others, but also to aspire to be enriched by it and to offer to it whatever they possess that is good, true and beautiful.

There has been some controversy lately over Leah Libresco working through the Church’s teachings on sexuality and marriage on her blog. Many are of the opinion that her words will lead other young, impressionable Catholics or would-be Catholics astray. She has been advised repeatedly to work through this privately lest she give scandal.

What I did last week was scandalous. Writing that post, gleefully stirring up animosity and even hatred among faithful Catholics, that was scandalous. I’m only 28. I’m still young enough to understand what causes doubt and casts aspersion upon faith for this young generation, who carry on debates and seek knowledge in virtual places. It’s not Leah, trying to work through all the teachings of the faith she accepted with a good heart and an open mind.  It’s me, pulling out the pitchforks to go after a polarizing figure who is, nevertheless, my brother in Christ, just because it’s fun. Leah is seeking virtue. She’s offering what she possesses of the good, the true, and the beautiful to the blogosphere. That will never turn people away from Christ and his Church. But me, adding to the ugliness of the internet, literally subtracting from the truth, goodness and beauty at Patheos…that will turn people away from the Church more quickly than just about anything else.

I’m sorry for writing that post. I’m sorry for disappointing my readers, my fellow Patheosi, and the people who look to Patheos bloggers for charity. I’m sorry, Michael Voris, for being a snarky asshat instead affording you the respect and charity of an actual argument and an attempt at a friendly dialogue.

And thanks, Papa B, for the letter. I needed to read it. 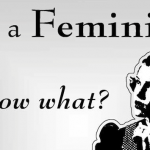 February 4, 2013 Slut-Shaming and the Attractiveness Factor
Recent Comments
0 | Leave a Comment
Browse Our Archives
get the latest from
Barefoot and Pregnant
Sign up for our newsletter
POPULAR AT PATHEOS Catholic
1