A Tale of Two Popes 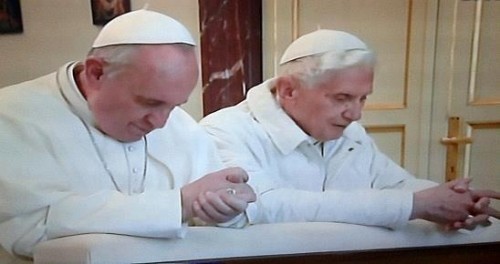 Yesterday, the Anchoress and I were talking about how astounding the shift has been in the positive media response to Pope Francis after the overwhelmingly negative response to Pope Benedict. I said it seems that the secular world is pitting these popes against each other on imaginary pedestals, with the pope they hate embodying all they hate of Christianity (sin, mostly, seen as rules, doctrine, authoritarianism, hate, etc) and the pope they love embodying all they love of Christianity (love and mercy).

Literally five minutes later, my neighbor called to tell me that Fr. John Wauck, an Opus Dei priest and a professor of literature at the Pontifical University of the Holy Cross (and incidentally, the uncle of the fiercest and most fabulous history professor to ever walk the earth, Dr. Susan Hanssen), was giving a lecture at AMU about communication in the age of Francis. The Ogre had a class to teach, but I miraculously found a babysitter at the eleventh hour and tripped merrily off to hear the lecture.

The whole talk was awesome and I took seven pages of sloppy, scrawling notes. But there were a few things he said that struck me as helpful in attempting to tease out some of the underlying reasons for such a dramatic swing in media response.

As anyone who’s paying attention can see, there is literally no substantive difference in the things Pope Francis said in the America interview or on the plane ride back from Rio than in the myriad of things Pope Benedict said during his papacy. They’re preaching the same Gospel, referring to the same Catechism, trying to lead people to the same Truth that was always there. The marked difference is in their approach.

Fr. Wauck said that Benedict had a self-effacing humility in front of the Truth. He didn’t want people to look at him, he wanted them to look at Christ, so he tried (maybe unconsciously) to make himself invisible in front of Christ. Essentially, the goal of his papal style could be boiled down to “letting the world see the Truth.”

Pope Francis’s style is utterly different. Fr. Wauck said that modern technology allows us to see that Pope Francis literally never looks at crowds. He always looks at individual people in the crowd. His gaze is always focusing on a person instead of roaming across a faceless mass of people. Fr. Wauck even told a story about how during one Wednesday audience, the Pope was waving at a crowd of people and for one second, his wave turned into a three and then a zero and he winked, then continued on waving and smiling. Pope Francis later told the Italian National Soccer Team that he had seen a man in the audience holding up a banner for the the San Lorenzo soccer team from Buenos Aires, the Pope’s favorite team. The night before, they had won 3-0.

It might be my UD lit background kicking into overdrive, but I think the implications of this difference in style are huge, and enormously helpful in understanding the massive shift in cultural response to the Pope.

Lots of people have said that the problem with Pope Francis’ idea of a “field hospital for the wounded” is that the “wounded” will never admit that their wounds could be related to sin no matter how much we try to give them treatment. I’m inclined to agree with the general sentiment of that. Our modern, Western culture has very much lost any real belief in sin. But why, then, is a culture who refuses to acknowledge its own sin so desperately clinging to a Pope who promises mercy? After all, mercy isn’t mercy unless there’s something to forgive, right?

It’s important to note here that the secular media is actively suppressing (or at least ignoring) reports on things Francis has done that show a continuity with the “harder” teachings of the Church. The excommunication of the priest in Australia, for example. Under Benedict, that would have caused widespread anger. Under Francis? *crickets* Never in living memory have I seen the secular media deliberately choose a narrative of love over a narrative of hate when it comes to Christianity, but with Francis, they are genuinely ignoring the things they don’t want to see…or perhaps, the things they’re not ready to see.

I suspect our culture has grown weary of its own sin. I think there is a general undercurrent of exhaustion with all this decadence, and despondency over the emptiness it breeds. I think our culture is absolutely desperate for mercy, but unable to understand why. And I think that’s why they are latching onto Pope Francis so voraciously. When an entire culture has lost a common vocabulary with which to discuss things like sin, forgiveness, and morality, they’ve lost the ability to see the truth, even if the successor of Peter is vanishing into it, the better to hold it up before their eyes. But if the successor of Peter steps out of the truth and looks straight at them, holds out his hand, and says, “let me heal your wounds”…well, that’s a different story. I don’t think the secular culture will be able to see Christ until they have been seen by Him. A patient who is dying of dehydration is usually so confused and disoriented that he or she doesn’t even understand what’s wrong with them. Why would it be any different with desperate afflictions of the soul?

All this is not to say that Francis’ approach is somehow the right one and Benedict’s was the wrong one. I think Pope Benedict laid the ground work necessary for Pope Francis’ approach to work, by strengthening the faith and understanding of us Catholics already safely ensconced in the arms of the Church. It’s no use bringing in a second wave of wounded if the first wave are still occupying all the beds, or if the doctors and nurses are themselves too wounded to give aid. (Yeah, I’m stretching the metaphor, but you know what I mean.) I also think the long-term value of Pope Benedict is simply immeasurable. He left us (and is still leaving us!) a treasure trove of brilliant writing to enlighten and assuage the faithful in the years to come.

Simply put, I don’t think the irritation and even anger over the (real or perceived) differences between Pope Benedict and Pope Francis have any merit. I see an astounding harmony between these two Popes, in substance obviously, but also in style.

Did you know that, according to Fr. Wauck, the Vatican doesn’t have a strategic communications office? Not the way we think of it. By that I mean, there are no “handlers” for Pope Francis, and there weren’t for Pope Benedict. They don’t even have the common PR strategists that bishops in the US have. A few people have expressed fear over that fact, but if anything, I think that only proves what an almost miraculous gift of the Holy Spirit these two Popes are to us as a Church, and to the world at large. More than a gift, really. They’re like a one-two punch: first Pope Benedict showed us the Truth, and now Pope Francis is showing us how to live it.

September 24, 2013
Seek God in Every Human Life
Next Post

September 26, 2013 An Open Letter to my Husband
Recent Comments
0 | Leave a Comment
Browse Our Archives
Follow Us!

The Demand to Open Churches Is...
suspended in her jar
Related posts from Barefoot and Pregnant

M to the A to the S to...
In which my whole time-travel rosary shtik reaches that great drowned continent,...
view all Catholic blogs
What Are Your Thoughts?leave a comment
Copyright 2008-2020, Patheos. All rights reserved.