The Jew, the Samaritan, the ‘Other’, me 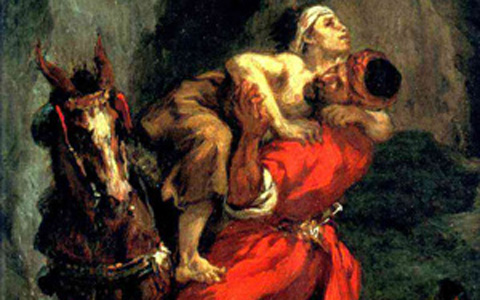 I decided to go to confession yesterday morning before the routine Saturday errands. I took Charlotte with me and saw a friend while I was waiting in line, so I wasn’t mentally composed enough to methodically list off the results of my examination of conscience. Instead, I just went in and told the priest that I hadn’t been to Mass in nearly a month because I was angry with my husband, and I knew that if I went to Mass I would just feel guilty and apologize and forgive him, and I didn’t want to do that. So I just refused to go to Mass with him.

I fasted too, yesterday, for the first time since I was pregnant with Lincoln. It made me angry. Being hungry usually does. It’s hard to feel like there’s any real meaning to your self-denial when you become irrationally annoyed with your children for eating so loudly that you can hear them chewing. Sometimes even calling to mind the images of war-torn Syria isn’t enough guilt to quell the impulse to snatch that cinnamon roll right out of your kid’s hand.

The Anchoress keeps repeating this: “But go and learn what this means, ‘I desire mercy, not sacrifice.’ For I have not come to call the righteous, but sinners.” I’ve always assumed that she was talking about the way we bloggers talk.

I used to read Elizabeth Esther’s blog religiously, until she wrote that post about how she regretted voting for Proposition 8. I felt sorry for her, the poor lost soul, for going liberal. Shaking my magnanimous head sadly, I quietly deleted her from my blogroll. I didn’t make a big fuss, because I’m merciful, you know? I don’t like to kick the spiritually downtrodden and bereft.

For 24 hours, I couldn’t get into Disqus. It wouldn’t load, even though the rest of the internet was working swimmingly. I had no idea if there were comments to be released from moderation or not. It was kind of a relief, since I haven’t seen so much nastiness online since that time Simcha wrote about pants. Who knew Thomas the Tank Engine would bring out the pitchforks?

The Anchoress is always on about how we can’t throw people away. I know what she means, because those Thomas nutters are ready to light me on fire. Don’t even get me started on the Trads, or the Voris-ites, or the abstinence-only sex-ed yahoos. Those people seriously need to hear what she’s saying. Jeez.

On one occasion an expert in the law stood up to test Jesus. “Teacher,” he asked, “what must I do to inherit eternal life?”

“You have answered correctly,” Jesus replied. “Do this and you will live.”

But he wanted to justify himself, so he asked Jesus, “And who is my neighbor?”

In reply Jesus said: “A man was going down from Jerusalem to Jericho, when he was attacked by robbers. They stripped him of his clothes, beat him and went away, leaving him half dead.  A priest happened to be going down the same road, and when he saw the man, he passed by on the other side. So too, a Levite, when he came to the place and saw him, passed by on the other side. But a Samaritan, as he traveled, came where the man was; and when he saw him, he took pity on him. He went to him and bandaged his wounds, pouring on oil and wine. Then he put the man on his own donkey, brought him to an inn and took care of him.  The next day he took out two denarii and gave them to the innkeeper. ‘Look after him,’ he said, ‘and when I return, I will reimburse you for any extra expense you may have.’

Jesus told him, “Go and do likewise.”

The other day there was this article about Syria on WaPo. A few days later, a parody showed up, originally posted on Twitter but with a follow-up interview. I was amused when I read it, until I got to the part about “the Other.”

I’ve had too many close encounters with literary theory to keep my guard down when I hear that term, “the Other.” I’m usually already accessing the “debunking ‘the Other’ myth” file in my brain before I even get to the part where I learn which “other” this one is, this time. No exceptions here. I was halfway through a mental dissertation on Western civilization and how the spread of Christendom enabled Western countries to recognize human dignity, in stark contrast to their non-Western bloodthirsty counterparts, before I even realized what I was thinking. By the time I did realize what I was thinking, my computer finally pulled up Disqus.

Mercy, n: compassion or forgiveness shown toward someone whom it is within one’s power to punish or harm.

I’ve never heard a priest laugh so hard in the confessional. The screen between us actually shook. His amusement made me realize how absurd I was. It was humbling (and kind of hilarious) to see myself acting just like my stubborn, prideful, wonderful Charlotte, who regularly spends two solid hours sobbing in her room because I asked her to pick it up and “it will take too loooooooooong! (hicccup)”

The priest asked what brought me around and I admitted that I couldn’t ignore Pope Francis’ call to prayer and fasting, but I felt pretty asinine praying and fasting for peace across the world when I refused to give peace a foothold in my own home.

There were some nasty comments in my moderation folder. One in particular really set me off. I starting spewing about it to the Ogre, about how I was ready to jump through the computer and smack this *redacted* down, about how I should just write a whole post discrediting her, since it is *my* blog that people click on daily, after all, not hers.

After all, if I rally the troops to tar and feather her, who’s gonna come to her defense? It’s my blog. Not hers.

When I read the parable of the Good Samaritan, I’m always the Samaritan. The Jew is usually some hopelessly out-of-touch, uber-judgmental fundamentalist type whom I benevolently aid, despite the aspersions he or she is casting at my nose ring, resulting in said fundie’s eternal gratitude and repentance for being such a hypocrite until I showed them the error of their self-righteous ways.

My penance was to hug my husband. Just that. To hug him, to hold him.

But it was penance, you know, so I did it.

As he held me and as we talked, I realized that he had been holding me all along, the way an adult holds a child who’s throwing a tantrum. You just have to hold them even if they punch the everloving crap out of your kidneys, because eventually it’ll pass and they’ll forget why they were angry in the first place.

But they won’t forget that you held them.

I’m so bad at fasting, especially when I’m trying to fast *for* some external purpose. I follow the prescribed rules plus avoid sweets, since that really hits me where it hurts. I can kind of white-knuckle it through a fast for penance or during Lent, but fasts like yesterday’s usually end the same way every time. I make it through most of the day on the fumes of my own piety, and then after the one meal my will crumbles and I figure that eating the leftover pastries I bought the kids at the farmer’s market isn’t going to affect Syria any more than not eating them will, so I eat them and don’t even feel guilty, because really, who in the world cares whether or not I have the strength of will to follow through?

Last night the Ogre and I ate our meal together after the kids were in bed. It’s a kind of communion, to eat with just my husband after a day of fasting. It felt like a vow or a consummation, both of us eating slowly, knowing that we had waited for this meal while obeying the request of someone external, a request for sacrifice and self-mastery. Even if I didn’t fully understand how fasting would help bring peace to the world, I understood how it could help bring peace to us.

Everyone will always be “the Other” to me, until I can accept that the neighbor God wants me to love as myself is the one whom I like the least. The one who makes me crazy. The one who makes me want to jump across the fence or into the computer or through the television so I can dish out a smack-down.

Sometimes, some horrible times, those people are the ones playing the Good Samaritan to my wounded Jew.

The pastries stayed safely tucked away in their box last night. The first thing I did this morning was scarf one down, but still.

September 15, 2013 Oh Husband, Where Art Thou?
Recent Comments
0 | Leave a Comment
Browse Our Archives
get the latest from
Barefoot and Pregnant
Sign up for our newsletter
POPULAR AT PATHEOS Catholic
1