Angels and Animals: Voices in Our Wilderness

Angels and Animals: Voices in Our Wilderness December 14, 2015 Nancy Rockwell

Everywhere, the air is full of outcry: John thunders down words of destruction; the anvils of God are ringing as swords are beaten into plowshares; hills and valleys are being leveled, so prophets say; and even Mary speaks of the mighty being pulled down from their thrones. That has never happened quietly, not anywhere. Advent is a noisy time. Theologian Mary Luti describes Advent as  a ruckus, not a retreat.

Among the cacophony of voices are some we need to be listening for:  angels and animals.

Sheep, to be precise about the animals, baaing, chewing, breathing through the Bethlehem night in the wild fields outside the walled town. They are, of course, accompanied by shepherds, gnarly outdoor fellows, human animals with taut bodies muscled to lift four hundred pound sheep any time of the day or night; faces weathered; eyes watchful for wolves and thieves; throats hoarse from shouting at sheep, from beer and weather; minds on the wilderness itself and all that lives therein. 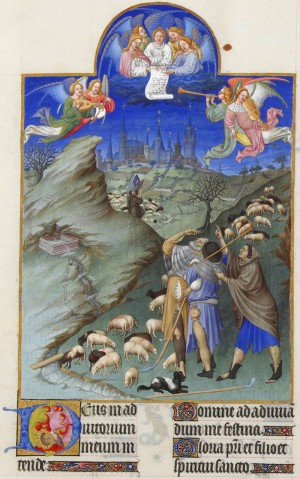 Who knows why God is so infatuated with shepherds?  It has been so since the beginning, since Abel, beloved fellow, whose blood still stains the ground and wounds God’s heart.  And there must have been something of Abel in David, the shepherd whom God chose before Samuel, chose over all the eleven older brothers who were beautiful and accomplished young men. Esau, the shepherd, was such perfection he drove Jacob his brother crazy with jealousy, but nothing good came to Jacob till he learned, from his Uncle Laban, how to be a herdsman, and turned out to have a genius for it.  O, then Jacob could wrestle with angels!

Here, now, as stars fall and the holy is born into a Child in Bethlehem, wouldn’t you know, the only invitation to come and see is given to shepherds.  Out of all the world, only they are invited to witness the birth and share the tale with all the world.  And how are they invited?  By the entire heavenly host, that’s how!  THE MOST INCREDIBLE concert in all heaven – and it was for the shepherds – and only for them.  What is it that makes God melt for men who walk among herds of woolly-coated ewes and rams, men who sleep in the fields with the herds, men whose hearth is an outdoor fire, not a family home in Bethlehem? 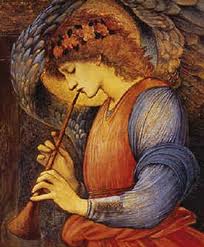 The angel’s voice has been present in the whole of Advent, calm, definite, determined, agenda-driven, yet always beginning every conversation with the words, Be not afraid.
Aware that we cannot do what we must until we get that demon, fear, under control.

Aware that the God to whom we pray for protection always, has always terrified us.
Aware that the nearness and holiness we long for scare us to death.
Aware that Advent is a wilderness, and life is, too.

Then, over the fields that unfold outside Bethlehem and continue to the shores of the Sea of Galilee, before these particular shepherds, the Advent angel becomes the entire heavenly host, pouring a torrent of song over the woolly backs and knobby knees, the wiry beards and speechless, open mouths of men who thought they had seen everything and have no idea what to make of this.

The Bible mentions so many times when people sing to God.  On the far-side beach of the Red Sea, shoes still wet, Miriam and the women sang. In tormented nights in the palace, David sang the demons out of Saul.  And throughout his life David sang praises and promises of God, there’s an entire book of his psalms in the Bible.  By the banks of the Babylon, the exiled people of God sat down and wept, and tried but could not sing songs of Zion there. At the end of the Last Supper, Jesus and his friends will sing.  But now, and only now, and never, ever, in the Bible before or again, on this first Christmas night, the entire heavenly host sang to a few people,  and not just any people, but these woolly-headed shepherds, who were not thinking about God at all until the angels came. 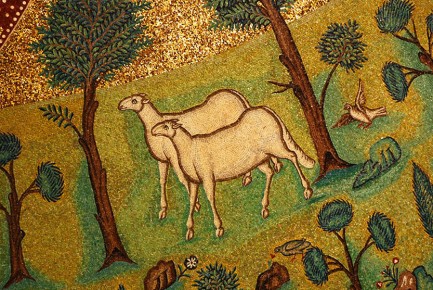 They sang the first carols of Christmas, those angels.  And ever since, at Christmas, we the people who throng to the manger, have been joining the angels in songs for the birth of a man we call The Good Shepherd, and whom we pray will find the lost sheep we are, in the wilderness of our lives, and in the thick darkness of this world. 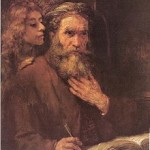 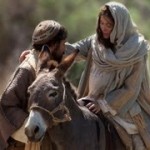