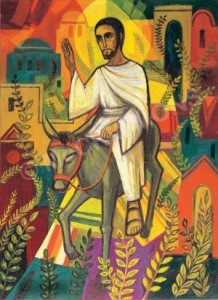 Jesus’ entry into Jerusalem produced a crowd, according to the gospel accounts. The crowd was large, loud, boisterous, happy.

Evidence has surfaced that it was the habit of Roman Governors to require citizen attendance at the Damascus Gate when they entered with their troops, honoring them with branches and flowers. The Damascus Gate had a paved Roman road, wide enough to allow a legion to march in formation.

Scholars  now surmise that Jesus’ entry through the gate known as the Beautiful Gate, was a direct mockery of the Roman governor and his troops, likely on the very day a legion was arriving. And the mockery was the reason Pilate wanted Jesus dead.

The Beautiful Gate was legendarily the one through which the Messiah would enter the City, and also the Gate through which the Shekinah, the spirit of Shabbat and a feminine shape of God, each week came at sundown on Friday to bring  the sacred day to Jerusalem.

Jesus was playing on these themes, as well as the power of God’s peace being more honorable than the power of war. Presenting a quite different image of holy power than did the Roman Empire, riding a donkey instead of a war horse, leading a legion of disciples in rags, wearing the armor of good will, Jesus entered the city on a dirt road. And the crowds roared approval for this act of public theater. Pilate considered it a revolutionary action.

On January 20th Donald Trump arrived to be installed as President in Washington. His prep team had endured innumerable refusals by high school marching bands to participate in his parade. So Trump brought out  military marching bands, and added a parade of tanks.

His new title, Commander in Chief, brought him to the edge of the sidewalk, where he stood in salute for a long time, honoring every tank.

He wanted his inauguration to be seen as an act of revolution against the halls of power, and as an act of might, presaging a world dominance built on enhanced military power and freedom from civil and social restraints. Like taxes. Like polite speech. Like loving your neighbor.

The National Park Service photographs show how small the crowd that came to celebrate his entry was. Shown side by side with his predecessor’s inauguration photos from 2009, the emptiness of the national Mall on January 20, 2017 was staggering.

What is remarkable, this Palm Sunday, about our public life in 2016-17, is how many people stayed home. The absence of crowds on the day of Trump’s inauguration ceremony. The fewer-than-usual number of balls that night, and the smaller-than-Obama’s attendance at each. And most of all, the absence of voters at the polls.

Fully half of eligible voters stayed home on election day. And I think we have to assume that means they seriously disliked both candidates.

Of the half that did vote, Trump won the electoral college with less votes, about 45 or 46%, which, of the total eligible was less than 25%. Trump is still claiming  he won a mandate, when in fact he won a fluke.

What was not a fluke was the stunning defeat the Democrats experienced at national, state and local levels, a defeat that has been mounting for at least six years.

So neither Trump nor the Democrats can claim to be to the people what Jesus, before his resurrection, was. The man who spoke for most hearts.

Jesus and Trump both entered the city of government proclaiming things have got to change. But Jesus entered already talking of defeat, of its necessity as a part of transformation, of the darkness that would befall, and of faith, hope, and love, the combined force of which would be the grace to get them all through, including him.

Trump entered Washington proclaiming himself the Wizard who would transform Oz. But it didn’t take many days before people began pulling back the curtain on his act.

His first 71 days in office have not been joyful. His performance has been contentious and quite possibly illegal. His early actions, much bragged about as he flashed his huge signature, are tied up in courts. He and his inner circle are the subject of high level investigations in our land – FBI, Senate and House.

Defeat is stamped on everything he has touched.

Bunkered inside the White House, he fumes and tweets.

It has already been announced that he will not throw out the first ball on Opening Day in Washington. And the pundits are saying it is because he knows he will be booed, and doesn’t want that on national television.

Inside the slogan, Make America Great Again, is embedded the idea that America is no longer great, is teetering on the brink of folly, cannot even bring itself to understand that its citizens are old, and they need a lot of health care, and a lot of immigrants to do the work only able, young bodies can do.

A terrible shadow has settled over Trump’s administration. Some are already calling him a lame duck, 71 days into his term. He may recover through some act of power, but he also may not. He has no plan and no strategy, and most of all, no team.

Jesus, of course, was called a goner. Jesus never bunkered down, never fumed about what slurs were being said against him, talked instead about the uses of defeat. And he did have a plan, a strategy and a team.

Easter surprised his followers, but they were hanging together expecting something, able to share the joy. Easter has been surprising the world ever since, and it comes with a bidding, to keep unbinding the living and setting them free. 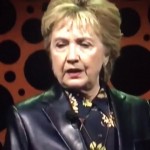 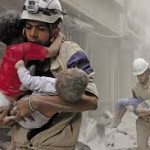 Not Liberal, Just Literate
Religion Prof: The Blog of James F. McGrath
Related posts from The Bite in the Apple