Women’s Dignity in the Workplace

Do women have to act like men when they enter the professions? 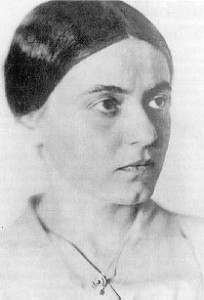 The person who has most helped me to ponder this question is Edith Stein: an intellectual and a woman of deep faith who worked in philosophy and education. Stein was raised Jewish in Germany, became atheist, converted to Christianity and became a Carmelite nun, and then was killed in WWII for her Jewish heritage. She was canonized a saint in 1998.

Although she points out that women’s temperament will likely lead them in greater proportion to certain professions like art, history, and the humanities, Stein insisted that some women will also shine in physics, medicine, politics, and diplomacy. Stein is right on when she says “there is no profession which cannot be practiced by a woman” (Woman, p. 47).

But beyond saying that women can shine in every profession, Stein calls women to exercise their professions as women: “The participation of women in the most diverse professional disciplines could be a blessing for the entire society, private or public, precisely if the specifically feminine ethos would be preserved” (Woman, p. 49). What does this mean?

In a summary of Stein’s life and teachings, Laura Garcia writes:

She [Stein] did not argue that biology is destiny, but that the physical differences between men and women profoundly mark their personalities. The woman’s body stamps her soul with particular qualities that are common to all women but different from distinctively masculine traits. Stein saw these differences as complementary and not hierarchical in value, and so they should be recognized and celebrated rather than minimized and deplored. There are two ways of being human, as man or as woman.

Some recoil at assertions about biologically based differences between men and women, and understandably so. Such claims have often been used to limit women’s public roles (i.e., “a woman’s place is in the home”) or to excuse men’s behavior (i.e., “boys will be boys”). Put in the proper context, however, it’s important to talk about how men and women differ in how they carry out their professional work. In particular for women who are not yet married or who may not get married, it’s important to point out that being a woman, even a good Christian woman, is not only about relationships with men and children — we relate to everyone with our specific gifts as women.

Unlike some feminists of her time or today, Stein did not try to liberate women from motherhood. Rather, Garcia explains how Stein believed that “motherhood is a universal calling for women, and so not simply a task to be exercised with one’s biological children.” Stein herself was never a biological mother, but she was an educator and later a nun. As a sociologist and demographer, I know that, compared to previous generations, many more women in the U.S. today will never be biological mothers.

Although Stein points out that motherhood may be rooted in biology, she adds that women can live out their call to motherhood in myriad ways: mentoring, advising, caring, and inspiring. Stein went so far as to say that women should not give up their feminine ethos when they enter male-dominated professions; to do so would leave them profoundly unfulfilled.

Please note that not only women are called to mentor and care for others. Men certainly often be wonderful mentors and very caring, but women feel a greater loneliness if the relational aspect is missing from their daily work. Women can do their work as well as any man, and they can still live out their femininity (feminine does not mean high heels and high voices, but the spirit of caring for the whole person like a mother would).

How does this apply to me? Although there are many ways I try to live out my vocation as a female professor, one particular way is with undergraduate students. When I find a well-intentioned undergraduate student performing poorly in class, I ask why. Often they share deep personal problems, which gives me the chance to refer them to campus resources that can help–such as the Dean of Academic Affairs or the mental health clinic. This semester alone, 4 undergraduate women have told me that they suffer clinical depression.

In other cases, disgruntled students (mostly young men) often challenge my authority in disrespectful ways. After one such unpleasant encounter, I commented to a very respectful male graduate student, “You know, I just don’t think my students treat me like a 65-year old white male,” and he responded with a loud laugh, “Obviously not!” Perhaps the fact that this particular male graduate student comes from a society with much more traditional male-female roles than the U.S. helped him to see the naivete of my comment; yet his respectful behavior also shows male students from any home or national culture can learn to respect professional women.

His laughter at my comment also made me stop and think…Why would I not expect students to notice my age and sex? Is it not the same thing–their sense that I’ll listen to them and try to help–that leads some students to disrespect me and leads others to trust me? Can I establish my authority with those disrepectful students while not shutting out those who need my advice?

Yes, I can and I should—being caring and open does not mean surrendering a position of proper authority in the workplace.

Stein’s life and work can help women in all walks of life reclaim a feminine ethos without saying that biology is destiny, or asserting that women can only be fulfilled as biological mothers and companions to men, or claiming that to earn respect women have to act like men twice their age. Relationships with men and children may be vitally important to most women, but women also have a role to play in society—n every profession there is, society needs women’s gifts for helping, serving, listening, and instructing. Our female and male colleagues and students need our example as professionals who know our dignity as women. That is my vocation.

November 15, 2011
The Surprising Consequences of the Catholic Sex Abuse Scandal
Next Post