Testimony from Cuba: The Pope’s Visit was an Oasis

Part 2 in a series.﻿﻿ Click here for my podcast interview on Pope Benedict XVI’s visit to Cuba, hosted by Research on Religion.

As I explained in a previous post, I have traveled to Cuba multiple times to visit ﻿family members. During my visits, I became close friends with a group of young Cubans who are very active in a parish in Santiago de Cuba. Anxious for news from my friends in Cuba about the Pope Benedict’s visit, I emailed this group of friends in Santiago to tell them I would be thinking of them during his visit and to ask them to send me news of their experiences. 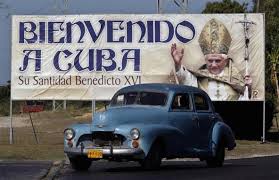 One of them, who I will call Laura, wrote me a beautiful testimony of her experience of Pope Benedict’s visit. Since the Cuban Revolution of 1959, communication between Cuba and the outside world, especially the “imperalist” northern neighbor, has been limited. Laura now has occasional access to  email, and given that the connection is dial-up (if you are even old enough to remember those days) she typed her message in Word and sent it as an attachment. Her words are so beautiful that I want to share them with you word for word.

First, let me tell you a little bit about Laura. She works as an accountant in a government job and in her free time, she teaches the Catholic faith at a local parish and visits the sick in her neighborhood. Being a practicing Catholic with a government job is challenging for her, given all the pressure to conform to ideology, not to mention that most people steal from their jobs to sell things on the black market. Laura sees her vocation not only in teaching her faith, but in living her faith by being  a good example at work, such as by not stealing.

However, when another friend of mine in Santiago de Cuba landed in jail for stealing from his job (he stole a few bags of soy), I knew she would help. I sent her one email gently suggesting she go visit his house to see how he was doing. I could tell by her reply she didn’t get the gist of my email, so I sent another more urgent message saying “Alejandro is in jail. Would you please go visit his family and see if you can help?”

Most people in Cuba avoid prisoners and their families; but I knew Laura is courageous and would try to help them. The next day I got an email from her saying, “I found out some things and I need to talk to you,” and she gave me a specific time to wait for her call. Calling from Cuba to the US (and vice-versa) is expensive and difficult, but she called me right on time and told me in less than 60 seconds that if we could send a certain amount of money, something could be done for Alejandro. After two months languishing in jail for trying to sell Cuban soy on the black market (the Cuban government sells its people soy because it’s cheaper than beef), Alejandro was released from prison. I was too afraid to ask Laura by email what she did to help him; but I knew I could count on her to risk her own safety and find a way to help Alejandro get released.

Laura is in her 30s, stunningly beautiful, and not yet married (although she would like to be). To reward her hard work, she once won tickets from her employer to go to a night club with live music. Such clubs are frequented by tourists to Cuba, but the entrance fees are out of the  reach of most Cubans, even those like Laura with good jobs. When leaving the club, Laura’s beauty caught the attention of the police, who accused her of having gone to that club to work as a prostitute for foreigners. She sobbed and pleaded with them, but under Cuba’s “ley de la peligrosidad” (law of dangerousness), you can be accused of loitering, working as a prostitute, or other offenses with no evidence. If you are stopped three times for the same offense (or in Laura’s case, unfounded accusation) you can go to jail. Unable to persuade the police that night she had just been with friends at the club, Laura went back to the police station the next day with her father so that he could give testimony that she is not a prostitute. Known by her friends as “The Black Virgin” because of her beauty and purity, I can only imagine how humiliated both she and her father felt that she was accused of being a prostitute.

Probably to counter the rampant prostitution and promiscuity in Cuba, Pope Benedict XVI mentioned the importance of marriage in nearly every talk he gave in Cuba. In his March 28, 2012, homily in Havana for instance, he said that seeking the truth about the human condition “we discover a foundation of an ethics on which all can converge and which contains clear and precise indications concerning life and death, duties and rights, marriage, family and society, in short, regarding the inviolable dignity of the human person.” At a panel on Catholic social teaching a couple of years ago, Duke Divinity School’s renowned Professor of Theological Ethics, Stanley Hauweras, said that the most radical element of Catholic social teaching was the idea that the family, not the individual, is the basic unit of society and that the state cannot violate the rights of not only individuals but also the rights of families. Knowing that communism tried to break the bonds of the family in order to make individuals more dependent on the state than on blood relations, I was not surprised to hear Pope Benedict repeat many times the importance of marriage and family to a thriving society, for it is in the family that we find and nurture the love that should permeate all our actions, both to our relatives and our neighbors. The family in many modern societies is fragile, and the state of families in Cuba is nothing less than a crisis. It’s hard to imagine sweeping change in Cuba without strengthening families.

In her email to me this week, Laura said  how elated she was that since Cuba decided to recognize Good Friday as a holiday, she can live her life as God asks. Then, in an attached Microsoft Word document, she wrote (in Spanish):

I have so many marvelous things to tell you!!! I have had so many transforming and beautiful moments during this Lent that I have to share them with you. Every year, I live Lent in a different way and with different intensity. Well, you could say that this year God knocked me off my feet. That’s not to say I heard divine voices, but God spoke to me in the deepest part of my heart, telling me that even though I am his beloved daughter, that does not give me any privilege or advantage over anyone else, whether that person is a believer or not. Rather, I should be the humblest of all people; I should not fall into the temptations to hate, to have hard feelings, to be selfish; temptations that surround us and can trap us in this world full of competition and rivalries (we live in a world that thinks that the law of retaliation — “an eye for eye, and a tooth for tooth” — will resolve problems). That is why we need to love, it is love that unites us with God and with our neighbor, it is love that allows us to forgive others and forgive ourselves.

Pope Benedict’s visit was an oasis, for this Lenten period and for my whole life, like a spring of crystal clear water in which I can drink and see my true essence reflected. 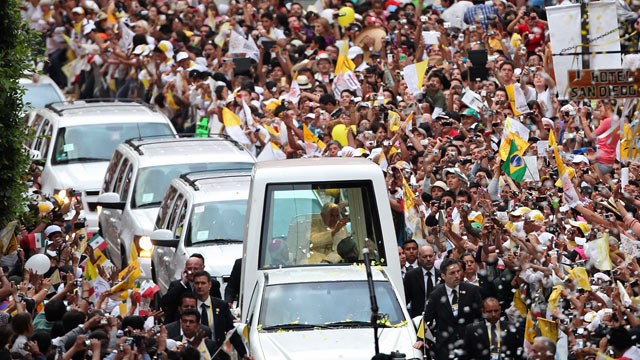 I had the privilege of receiving the Pope when he arrived to the Archbishop’s residence in Santiago. I was very close when he arrived in the Popemobile, and my heart leaped for joy and my whole being smiled (those around me said my eyes were shining too). I only know my heart was pounding and I wanted to have wings to fly to the Pope’s side and ask for his blessing (like the sick person in the Gospel who is cured just by touching Jesus’ mantle).

On a side note, the Pope looked a bit tired.

Later I went to the Plaza of the Virgin of Charity and I was inside the rope that blocked off the entrance. His holiness arrived a little bit late (about 30 minutes after his scheduled time; maybe he needed to rest from his trip to Mexico). The entrance of the statue of the Virgin into the plaza was just as we had hoped-spectacular.  Her image moved all the multitudes of people gathered, and everyone who had taken cover in the shade ran out and the plaza filled up even more.

There were people there from all parts of Cuba and the world. Next to me were some Germans who were very proud showing their flag, but I didn’t recognize the shield on it. Everyone was very disciplined despite the sun, the threatening rain, and thankfully the lightning never came too close. Everything was beautiful and peaceful, although someone yelled some things out of place, but  everything turned out all right.

Finally, I want to tell you that you were in my prayers in a special way during that wonderful Mass.

From your friend Laura who loves you. I wish you a blessed Holy Week.”

People in Cuba like Laura and Rodrigo, who I wrote of in my my previous post, are examples of heroic virtue to me. They are examples that the Pope’s words of forgiveness and service to all people–whether believers or not–have taken root in the hearts of young Cubans. And their testimony and example continue to inspire me to imitate their virtues of generosity and humility. Gracias, Laura. Te quiero tambien.