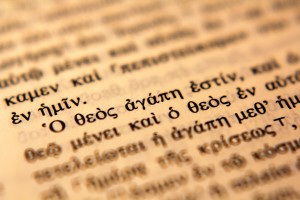 Last week, I taught for two days at City Church’s Institute, wherein my church offers an opportunity each summer for church members (mainly college students) to learn theology, church history, cultural engagement, etc. along with a church internship and a mission trip (or two).

One morning, I taught on the development and authority of Scripture. My lecture started with general and special revelation, and then moved into oral tradition and eventually all the way to the formation of the biblical canon. Next, I discussed the external and internal evidence for Scripture, highlighting the impressive and vast manuscript evidence for trusting the biblical texts we have today.

Now, let’s remember that our biblical manuscripts and fragments have withstood some serious scrutiny and inspection. We should have confidence in the manuscripts that we have, and we shouldn’t downplay their significance. In my lecture, I hold up manuscript evidence as an important part of our reason to trust the claims of Scripture. (Dan Wallace has a fantastic presentation on the ancient Greek New Testament manuscripts we have, by the way.)

A point I hammered on in last week’s lecture–and in the chapter on Scripture in Rooted–is that we cannot place our faith in the manuscript evidence, impressive as it is. Why? Because our manuscripts are dated and analyzed by methods such as carbon dating, linguistic comparisons, etc. We often laud them for being closer to the time of their authors than any famous Greek works we have. Moreover, we have 5,000 more New Testament manuscripts than the next closest major Greek work–Homer’s Iliad. Again, this is great news and should be part of our apologetic ammunition. But these are fallible proofs that cannot ultimately prove the veracity of the infallible Word of God.

A dazzling article published by The Atlantic reveals that the “Gospel of Jesus’s Wife,” a supposed ancient manuscript fragment describing Jesus’s marriage to and discipleship of his wife, is almost definitely a forgery. Karen King, the Harvard scholar who first revealed the fragment and defended its authenticity, has now stated that she was likely duped.

Even with all the advances in manuscript studies, it appears that the forger did a near-impeccable job of beating the system. The alleged forgery includes buying an ancient papyrus (assumedly online) and masterfully altering the ink so that carbon dating was unable to detect how not-ancient the fragment is. Pretty impressive, if true. And even if it isn’t, it’s no secret that carbon dating is not a foolproof method.

So what does this teach us about manuscript evidence? We don’t want to hold onto these proofs with a clenched fist, using them as the only means of defending the Bible. It reminds us of what I reminded the Institute students–external evidence for the trustworthiness of the Bible can be taken away in an instant. Carbon dating can be overturned, linguistic studies can be revamped, and in turn manuscripts could be deemed younger or less impressive than we thought. Yes, even our own copies of Old and New Testament manuscripts in Hebrew and Greek! One day it’s Karen King, the next day it could be us.

What if that happens? Do we stop trusting the Bible because the ancient manuscripts we have might be a century older than we thought? Of course not.

As Christians, we should primarily focus on Scripture’s self-attestation of its truth and the Spirit’s work in illuminating it to us. Scientific methods can be unforgiving friends, but God’s Word will never lie to us and will never change. Let’s make sure we’re not merely looking down at a Petri dish, but firstly lifting our eyes to the self-revelation of the God of the Universe. Remember this word from Paul to Timothy:

“…and you know that from childhood you have known the sacred Scriptures, which are able to give you wisdom for salvation through faith in Christ Jesus. All Scripture is inspired by God and is profitable for teaching, for rebuking, for correcting, for training in righteousness, so that the man of God may be complete, equipped for every good work.” (2 Tim. 3:15-17, HCSB)

We don’t rely on worldly wisdom or modern tools to tell us the ancient truth that all Scripture is inspired by God. He stakes his name on it, and he doesn’t take well to being called a liar (Num. 23:19). His Word, not methods or tools or studies, make us wise for salvation. This is our trust and our hope.

External evidence is icing, but it’s not the cake. Don’t let the fluff overpower the substance. 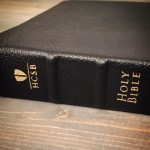 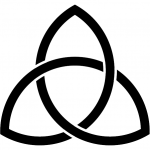 June 27, 2016 Why the Trinity Debate Matters for the Pulpit and the Pew
Recent Comments
0 | Leave a Comment
Browse Our Archives
Related posts from Church Grammar 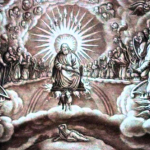 Evangelical
The Best Introductions to the Book of Revelation
Church Grammar