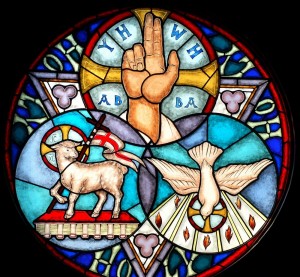 In my PhD dissertation for Ridley College, under the supervision of Michael Bird and Scott Harrower, I’m arguing that the Book of Revelation contains an incipient Trinitarianism; that is, his theology of the Trinity was in development but not developed, and he was trying to use particular language to make sense of the characteristics and actions of the Father, Son, and Spirit (like other NT authors). Bird says it something like this: “Imagine trying to explain Star Wars to someone in colonial Britain.”

I’m making the case that John, looking back at his Old Testament (OT) and reflecting on the Christian kerygma that would produce the New Testament (NT), at some level understood the divinity of the Son and Holy Spirit. No doubt, NT writers were not Nicene-confessing Christians–but I think it is an overreach to assume that they had no framework for the Son and Spirit’s identification with YHWH. What follows is a brief adaptation from my thesis, discussing a few ways in which NT writers wrestled with the Trinity, and how Scripture helped inform the formulation of the creeds.

This dissertation will be published as Vision of the Triune God: Reading Revelation through the Father, Son, and Spirit by B&H Academic in 2020.

Augustine’s confession here mirrors what the early Church was already confessing, both through the canon and in the creeds. Within the NT text and as early as the first half of the second century, Christians have assigned praise to the persons of the Trinity, not merely to a generic “God.” While infantile in its expression, Christians began moving toward an incipient Trinitarian understanding of the one God of Israel at an early stage. For example, benedictions, doxologies, and venerations are self-consciously attributed to all or some of the divine persons in a score of NT texts (Acts 7:59; Rom. 16:27; 1 Cor. 16:22; 2 Cor. 13:14; Eph. 5:20; Phil. 2:5-11; 2 Pet. 3:1; et al.). The Gospel tradition itself helps lay a solid foundation for understanding the roles and functions of the divine persons that is described in the above-referenced NT literature, with Jesus’s own words and actions showing a self-identification with God (Matt. 9:1-8; Mark 2:28; John 5:16-23, 8:58; et al.). The Trinity is, then, a hermeneutical and devotional effect of reading Scripture in its canonical form and catholic location.

So Nicene Christians did not invent the Trinity in their intramural squabbles; the Patristic period gives indication that they were already carrying on this biblical, pre-creedal notion of a triunity within God’s being from Scripture, and thus were defending a biblical truth already native to their theological language. Proto-Trinitarian language appears in the works of leaders such as Polycarp of Smyrna,[2] Justin Martyr, [3] Irenaeus,[4] and Tertullian.[5] Again, though inarticulate and sometimes flat out incoherent, there is a clear theological trajectory at the genesis of Christianity moving toward an understanding that Jesus and the Spirit were to be identified in some way with God.[6] This refrain continued on throughout church history, with the writing of many important treatises on the Trinity. Separate post-Nicaea works titled On the Trinity by Augustine of Hippo and Boethius respectively were early attempts at wrestling with the doctrine. The Church-shaping theological works of Peter Lombard (Sentences), Thomas Aquinas (Summa Theologica), and John Calvin (Institutes of Christian Religion) each gave considerable attention to Trinitarian primacy.

This view of early Christian confession about the Trinity has been rebuffed by self-identified non-Christians[7] and Christians[8] alike, particularly positing that this type of argument (1) does not deal with the apparent disparity between texts, some pointing toward pre-creedal language and others teaching the opposite, and (2) that a method built on the creedal Trinity is wrongheaded anyway, considering that “the worship of God is enabled by Jesus” but that “worship should always be offered to the glory of God the Father.”[9] However, as Matthew Bates has rightly argued, NT writers did not yet have stable “nomenclature to express the Trinity,” but “the die had been cast” through their understanding of the OT.[10] While Wesley Hill’s hermeneutical lens is pointed in another direction, he furthers this idea in his work on the Trinitarianism of Paul.

Whereas Bates focuses on the NT writers’ reading and exegesis of the OT, Hill is more concerned with arguing that creedal notions of the Trinity offer a better way of conceptualizing Paul’s views. While, again, NT scholars often balk at this method, Hill makes a plea for “a rereading … that treats the concepts and categories of trinitarian theology as hermeneutical aids rather than as liabilities.”[11] Further, he notes that theology and exegesis should not be enemies, and that “If trinitarian theology can assist in the task of interpreting Paul,” then “interpreting Paul is of benefit to trinitarian theology.”[12] The same can be said of Revelation and John the Seer.

So the proposal here is that when Bible readers look at both the text and the creeds together, it becomes clear that Trinitarian theology is a not a foreign concept to Scripture, forced onto its pages by the Church Fathers. The Church’s traditional belief about the Trinity in its dogmatic form is, rather, drawn from their reading of Scripture. David Yeago says it like this:

The New Testament does not contain a formally articulated “doctrine of God” of the same kind as the later Nicene dogma. What it does contain is a pattern of implicit and explicit judgements concerning the God of Israel and his relationship to the crucified and risen Jesus of Nazareth. The dogma was the church’s attempt to take account articulately of this more basic state of affairs: in both the preaching and the worship of the church, according to the witness of the New Testament, God is inescapably apprehended and identified as the triune God.[13]

Yeago offers a promising way forward with this concept/judgment proposal. In short, he claims that a doctrine can be biblical even if the terms do not match, so theology can use a conceptual form such as “Trinity” to render the same judgment as the biblical text.

Using Philippians 2 as an example, Yeago contends that the Nicene concept of homoousia makes the same judgments as Paul in Philippians 2:6ff. Paul’s description of Jesus as “equal to God” and “name above every name” renders the same judgment as the Nicene language “of one substance.”[14] Daniel Treier, commenting on Yeago’s argument, has explained,

Therefore Philippians 2 must include the Son eternally in the identity of Israel’s God, the one unchanging Creator of everything else. And, in the larger context of Isaiah 45, there must be anticipation of further revelation concerning YHWH’s identity.[15]

Kavin Rowe, similar to Hill and following the lead of Yeago, makes the same case in his discussion on the use of κύριος (“Lord”) in the Gospel of Luke. Building off of his concept of “biblical pressures,”[16] he notes,

The way Luke uses “Lord” evokes OT designations from Zechariah and numerous other texts. Further, Luke’s OT hermeneutic shows solidarity with other NT writers, who set the stage for later creedal theological concepts. Early Christians took their cues from NT writers, who took their cues from OT writers, to render judgments that seemed foreign terminologically, but were judgments strung through the entirety of biblical revelation. These judgments ultimately formed the basis, then, for the later doctrine of the Trinity.[18]

[4] Jackson Lashier. Irenaeus on the Trinity (Leiden, Netherlands: Brill Publishers, 2014), 206. This book, originally a PhD thesis at Marquette University, is an extensive treatment of the exegetical, theological, and philosophical development of Irenaeus’s Trinitarianism, arguing that he places all three persons on God’s side of the Creator/creature divide.

[5] Tertullian, Against Praxeas, trans. A. Souter (New York, NY: The Macmillan Company, 1920), xix-xx. He originated the term “trinitas” in this work, written sometime around AD 200. This is perhaps the first recorded formula for attempting to define the relationship of the divine persons.

[6] Space does not permit a full discussion of authorship of Revelation, but if the testimonies of Irenaeus and Tertullian are accurate, it is interesting to consider the implications of the Apocalypse’s author being John the Gospel-writer. Polycarp is said to have been a disciple of that John, and he would have been introduced to Trinitarian themes from perhaps the most blatantly proto-Trinitarian NT author. If Revelation’s John is the same John of the Gospel, the Trinitarian themes in both the Apocalypse and Polycarp’s statements are perhaps even more forceful.

[10] Matthew W. Bates, The Birth of the Trinity (Oxford, UK: Oxford University Press, 2015), 40. While I am both sympathetic and cautious toward his “prosopological” way of arriving here, his conclusion that the OT had significant bearing on the NT writers’ early development of the Trinity cannot be understated. This will become clear as this book develops. 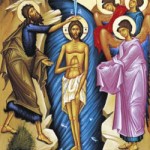 July 28, 2016
A Brief Case for Reading Scripture with a Trinitarian Lens
Next Post 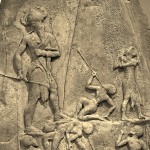 August 20, 2016 Biblical Sci-Fi? Aliens, Angels, and the Nephilim
Recent Comments
0 | Leave a Comment
Browse Our Archives
get the latest from
Evangelical
Sign up for our newsletter
POPULAR AT PATHEOS Evangelical
1

How to Explain Advent to People...
Ponder Anew
Books by This Author Books by Brandon D. Smith