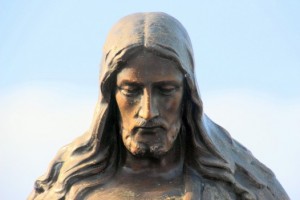 For some of us, this is a “duh” moment. Of course he is God! But even if this is obvious to you, it’s important to understand why it matters.

In John 1:1, we see that Jesus is called “the Word,” and John tells us that Jesus is God and has been for eternity. In several places in Mark, Jesus will be accused of “blasphemy”—claiming to be God—and the religious leaders are not happy about it. However, we see that Jesus truly is God throughout the book, especially when he forgives sins and heals the sick.

As God, Jesus deserves our worship and praise. As God, Jesus is the One who forgives sins, heals hearts, and offers hope for eternity. As God, he is everything we need.

Again, this may seem obvious, but Jesus is fully human. In a paradox we cannot understand on this side of eternity, Jesus is fully God and fully man simultaneously. But if he’s God, why did he have to become a man? Couldn’t he just forgive our sins from his throne in Heaven? He could’ve, but it would go against God’s plan for us as people.

God placed Adam and Eve in the Garden of Eden to be his image-bearers (people who reflect and represent him) and to populate the Earth with more image-bearers. In Genesis 3, when Adam and Eve sinned, all of creation was fractured and sin began being passed down to us.

In that moment, God could’ve just snapped his finger and forgiven sins. But instead, he wanted to have a real relationship with us, and he wasn’t looking for a Plan B. So he sent his only Son into the world to become a man and undo everything Adam did (Rom. 5:12-21). By living a perfect and obedient human life, Jesus restored mankind’s relationship with God and gave us all hope of spending eternity with God through faith in him. (Rom. 6:23).

3. Jesus Is a Prophet

In the Old Testament, God’s prophets spoke on behalf of God, often pronouncing either blessing or judgment on God’s people, and telling them God’s commands and promises for them.

Jesus is the true and final prophet, who gives us God’s final Word about blessing and judgment—either eternal blessing through faith in Jesus, or eternal judgment by rejecting Jesus. Our call is to respond to Jesus’s call to repent and place our faith in him, so we don’t turn out like so many who rejected the Old Testament prophets, separated from God and under judgment for our rebellion. Jesus, the true prophet, tells us and shows us more about God than any regular prophet ever could (Acts. 3:22-23).

4. Jesus Is a Priest

In the history of God’s people, the priest was the person who stands in the gap between God and his people. Every year, the priest—a righteous but still imperfect man—would offer the sacrifice of a lamb to atone for the sins of the people.

Hebrews 4 and 7 tell us that Jesus is the Great High Priest, who made one sacrifice that will atone for our sins for all time. Jesus is the both the Priest who offered the sacrifice, and the Lamb who shed his blood for the forgiveness of sins. Through the perfect God-man, our sins are forgiven and no sacrifice will ever need to be made again.

Though David was a great king—even called “a man after God’s own heart”—he was still a sinner. Many of his terrible sins are mentioned in the Bible. And yet, in 2 Samuel 7, God promises to bless him and his throne in his life, but more importantly, his throne would become an eternal throne ruled by a perfect, eternal King.

In steps Jesus, who is called repeatedly throughout Scripture “the son of David.” Why is he called this? Because he is the perfect, righteous, eternal King that God told David would come through his offspring one day.

As the King, Jesus rules and reigns not just Israel, but the entire universe. In Revelation 22:16, Jesus reminds his people that he is the King and that his reign will never end. This is good news for us, because our faith in Christ brings us into his eternal kingdom and allows us to spend eternity with him, worshiping and praising God for all he has done. 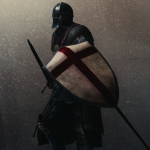 July 11, 2017 The Smorgasbord (7/10/17)
Recent Comments
0 | Leave a Comment
"Angels; whatever they are ...are from heaven , not of earth ... anything or anyone ..."
Stephaine A. Carter Biblical Sci-Fi? Aliens, Angels, and the ..."
"Thanks for this insight into John’s dig at Domition and Rome’s wannabe divines. Will you ..."
jeff q When the Book of Revelation Takes ..."
"Hello THeodore. Thank you for your comment. While I do not agree with all of ..."
walter lamphere What We Know about Arius and ..."
"Certainly no one here would equate obedience to the Lord Jesus Christ as "Legalism".................Right?"
WestWins The Sermon on the Mount and ..."
Browse Our Archives
get the latest from
Evangelical
Sign up for our newsletter
POPULAR AT PATHEOS Evangelical
1

Foucault's Philosophy of Power, Sex, and...
Cranach
Books by This Author Books by Brandon D. Smith