Hail to the Chiefs – Malia and Sasha Obama 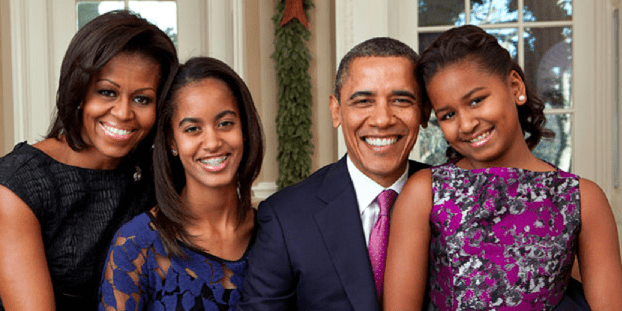 Is anyone really surprised by the fact that President Obama came out of the closet for gay marriage? What was most surprising is when he explained how his position (supposedly) “evolved,” by talking to his wife and daughters:

“It’s interesting, some of this is also generational,” the president continued. “You know when I go to college campuses, sometimes I talk to college Republicans who think that I have terrible policies on the economy, on foreign policy, but are very clear that when it comes to same-sex equality or, you know, sexual orientation, that they believe in equality. They are much more comfortable with it. You know, Malia and Sasha, they have friends whose parents are same-sex couples. There have been times where Michelle and I have been sitting around the dinner table and we’re talking about their friends and their parents and Malia and Sasha, it wouldn’t dawn on them that somehow their friends’ parents would be treated differently. It doesn’t make sense to them and, frankly, that’s the kind of thing that prompts a change in perspective.”

Let’s pause for just one second.  When Christian women run for high office, people inevitably bring up the question of submission.  Once, Michele Bachmann, for example, was asked during a debate, “As president, would you be submissive to your husband?”

People automatically assume that a Christian female President isn’t capable of making decisions without her spouse’s stamp of approval.  (I should add female Republican candidates –liberal women don’t get the same kind of questions.)

So are all those reporters who feared excessive family intervention in the White House all up in arms over the President’s announcement yesterday?  Um.  Not quite.

Liberals  everywhere are applauding him for his bravery and his wisdom.

So let me get this straight – it’s a problem if my mom listened too much to my dad, but it’s a heroic act if the President made a massive change in a policy position that could affect the entire nation after consulting with his teenage daughters?

While it’s great to listen to your kids’ ideas, there’s also a time when dads simply need to be dads.  In this case, it would’ve been helpful for him to explain to Malia and Sasha that while her friends parents are no doubt lovely people, that’s not a reason to change thousands of years of thinking about marriage.  Or that – as great as her friends may be – we know that in general kids do better growing up in a mother/father home.  Ideally, fathers help shape their kids’ worldview.

In this situation, it was the other way around.  I guess we can be glad that Malia and Sasha aren’t younger, or perhaps today’s press conference might have been about appointing Dora the Explorer as Attorney General because of her success in stopping Swiper the Fox.

Sometimes dads should lead their family in the right ways of thinking.  In this case, it would’ve been nice if the President would’ve been an actual leader and helped shape their thoughts instead of merely reflecting what many teenagers think after one too many episodes of Glee.
You might also enjoy:

May 11, 2012 On This One, I'm Team Hillary
Recent Comments
3,178 Comments | Leave a Comment
Browse Our Archives
get the latest from
Politics Red
Sign up for our newsletter
POPULAR AT PATHEOS Politics Red
1