Hillary Clinton: ‘Religious Beliefs Have To Be Changed’ so Women Can Get Abortions 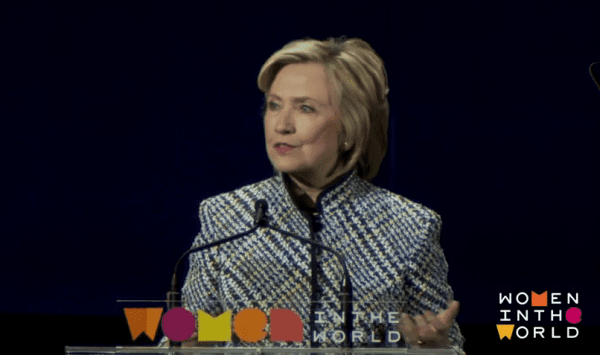 She really is out to change our nation, one religious belief at a time.

Hillary Clinton spoke at the 2015 Women in the World Summit in New York City about all that still “needs” to be done for women. As a presidential candidate, this is what she wants to do for women.

Legalized abortion isn’t enough. Birth control isn’t enough. Cutting the maternal mortality rate in half is not enough. Women need to be paid as much as men no matter what, and have the government pay for their childcare. Or their abortions, whatever they choose.

And for this to happen, Hillary says, “deep-seated cultural codes, religious beliefs and structural biases have to be changed.” Whatever stands between women and unrestricted abortion has to be eliminated – even if they happen to be rights that are protected in our country and have been since our Founding.

Why do so many people feel the need to attack the basic freedoms of our country? Religious freedom of belief, freedom of speech – none of these seem to matter anymore, if someone simply doesn’t agree with me. If someone believes abortion is wrong because of their faith in the Bible and the value of human life – well then, their beliefs have to go.

Do you see what’s most important to the abortion crowd? It’s not women, it’s not people, it’s not freedom. It’s this one issue of abortion that trumps everyone else’s well-being. It’s the demand of doing whatever they want to do without being inconvenienced by people who disagree with them, and have good reasons to!

I do not want someone who’s out to change my religious beliefs, just because I disagree with her agenda, as our next President. Do you?

April 27, 2015 Wedding Prep At Its Best
Browse Our Archives
Follow Us!