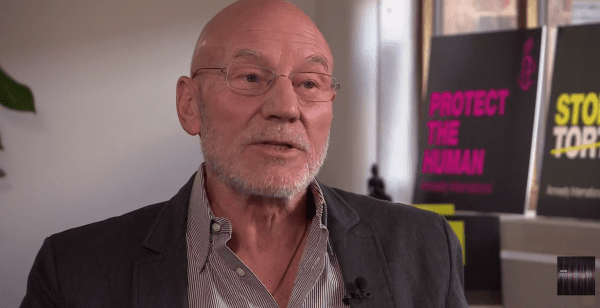 I love this!  To have someone as talented and respected as Patrick Stewart speak out in defense of the Christian bakers is a big deal.  It takes guts, and I hope Hollywood pays attention:

VETERAN actor and gay rights activist Patrick Stewart has defended a Christian bakery which was found guilty of discrimination for refusing to bake a cake with a pro-gay marriage slogan.

Last month, a judge ruled that Ashers Baking Company in Northern Ireland had discriminated against a gay customer by refusing to make a cake with the words “support gay marriage”, along with a picture of Bert and Ernie from Sesame Street.

Gareth Lee commissioned the cake for an event to mark International Day Against Homophobia and Transphobia. The bakery initially accepted the order but called Mr Lee two days later to cancel.

Speaking to the BBC’s Newsnight program, Stewart, who starred in the Star Trek TV show, said he supported the rights of the bakery to refuse something which they found personally offensive.

“I would support their right to say, ‘No, this is personally offensive to my beliefs, I [will] not do it.’ But I feel bad for them that it cost them [500] quid.”

Watch him talk about it here:

I love how the interviewer was surprised at Patrick’s answer.  Here’s the thing.  If you believe in liberty, you should support religious liberty.

After all, it’s America’s first freedom.

June 6, 2015 Pretty in Pink
Browse Our Archives
get the latest from
Politics Red
Sign up for our newsletter
POPULAR AT PATHEOS Politics Red
1